*Update 11/5/13.  I no longer subscribe to the idea of tree munching ceratopsids in light of new evidence

All right so one of my fave bands, Alice in Chains, put a nice big Triceratops skull on the cover of their new album The Devil Put Dinosaurs Here. The cover is quite nice in its simple effect but closer inspection reveals a hidden, but very metal, image. Careful analysis will reveal the horned one himself hidden in the image. The title of the album refers to the belief maintained by some fundamentalist Christians that the devil placed dinosaurs and other antediluvian fauna deep within the earth to fool the faithful. Well, you can subscribe to whatever belief you want to but I believe if you tell people that the devil created dinosaurs, well that just makes him all that much cooler in my opinion. The devil created rock n' roll and dinosaurs- I mean how bad could this guy be really? One can well imagine telling a bunch of kids that the devil created dinosaurs could dramatically backfire for church outreach...

But back to ceratopsids, the horned dinosaurs, which I want to talk about in this post. Now I have talked about these beasts before, where I weighed in on what I believe is going on with the Torosaurus/Triceratops debate in 'Ceratops Cichlid, but I don't want to talk about ontogeny or the new data coming to light suggesting their forelegs were in a half-push up stance after all. Ceratopsid horns, shields, and armor are interesting- but in my opinion what really makes these dinos neat and unique is a bone that only they posses- the rostral bone.

The rostral bone is the toothless upper beak tip of ceratopsids and opposes the predentary bone of the lower jaw- also toothless but found in all ornithiscians. Together they give ceratopsids some what of a 'parrot beak' and in life were likely covered by a sharp, continually growing rhampotheca- a beak. Now many interpretations of ceratopsid paleo-ecology invoke comparisons to large mammalian herbivores, rhinos or large bovids often posited as the best analogue. But I believe these comparisons focus a little too much on the prominent horns and shields and ignore what really shaped ceratopsid paleo-ecology- the rostral bone. Because if you think about it the narrow, sharp beak and strong bite of ceratopsids differs in almost all fundamental ways from the broad, grazing muzzles of large grazing herbivores. I mean just look at the broad mouth of the

white rhinos in the pic to the right, if you were an equally large and hungry ceratopsid you would have a tough time filling your maw with enough food to really makes ends meet. Ceratopsids seem under designed as large grazers but overdesigned in terms of bite strength and chewing capabilities. Ok so maybe they were not grazers but were predominantly browsers. But even here the low slung head, lack of neck, and semi-sprawling forelimbs really limit their browsing scope. I mean, dinosaurs were champions at growing really long necks. Even something like an okapi or moose neck would have been more advantageous for a browsing lifestyle than the stump ceratopsid neck. No with their sharp parrot-scissor like beaks, stout build and chewing capabilities ceratopsids don't fit the mold of your typical large grazing or browsing mammal. But they clearly were doing something right given their predominance and diversity in many ecosystems. Lets consider that "parrot beak" again as the comparison to parrots may offer useful insight into ceratopsid ecology.

is routinely performed by wild parrots, either for food, display, play, or to condition and sharpen the beak is readily observable- such as the yellow-tailed black cockatoo pictured to the left. Is it not so much of a stretch to imagine that ceratopsids engaged in similar chewing behavior? And given the scope of damage these birds can accomplish with their rather modest sized beaks, imagine the devastation multi-tonne ceratopsid beaks could have unleashed!

In the picture below I have depicted on scratchboard a Diabloceratops eatoni (keeping the devil theme going) chewing up a bow of a tree. I have depicted it laying down almost like a dog with a bone, holding down the branch with its front legs as it strips off bark. 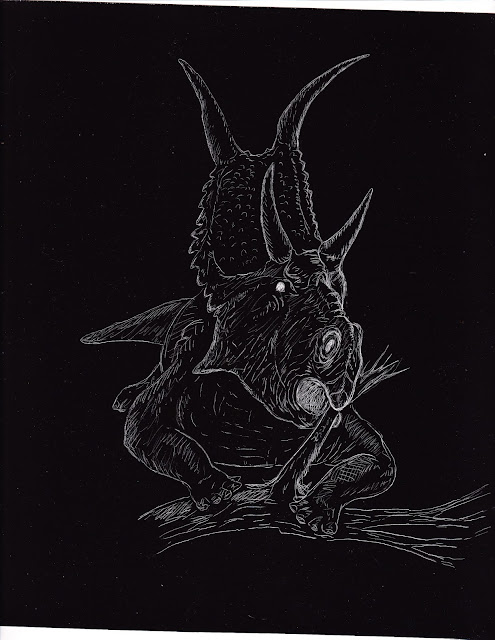 And if we start to imagine ceratopsids not as archosaurian analogues to rhinos or buffalo- but really start to invoke their strange and unique adaptations, especially the rostral bone, we get closer to how they actually were. I suggest ceratopsids are best imagined as a super-archosaurian amalgamation of a parrot and beaver. A parrot in terms of that beak and a beaver in terms of enjoying a highly fibrous diet and great capacity for habitat modification.

Now I have went on before how I believe that the common conception of sauropods as large-scale tree demolishers is, in the popular literature, a bit overstated, but I believe the case for ceratopsid tree-havoc is a lot stronger. Size, in this case is not the ultimate factor here- always remember that beavers, Castor canadiensis, are second only to humans in terms of habitat modification. With their sharp rostrals these dinosaurs could have chewed a good hole in a tree, then with their strong, stout build simply pushed over the weakened tree. The ceratopsid now has brought the browse down to its level and can have its pick of juicy young shoots, leaves, cambium and bark. In this way they acted like giant terrestrial beavers and their actions would have opened up clearings and provided valuable edge habitats that benefitted a myriad of other dinos and other critters by allowing new vegetation to grow. And remember the rotten wood eating dinos I talked about earlier? Certainly the actions of tree toppling ceratopsids would have benefitted them, (most likely hadrosaurs). In the productive, rainy habitats of temperate latitudes where ceratopsids did the best there would have been no shortage of fibrous plant growth for these guys to go after.

Ceratopsids, weirder and cooler than just reptilian rhinos!!! (Not my pic below but very cool) 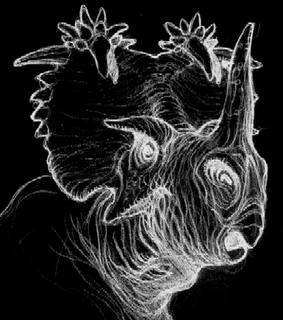