Yes family it is here!! My magnum opus Dinosaur Enlightenment: Piercing the Veil on Dinosaur Kaiju in an Age of Disruption is available as an ebook on Amazon kindle direct

If you liked antediluvian salad, this is like that but ratcheted up to 11 on a saurian DMT speedball!! 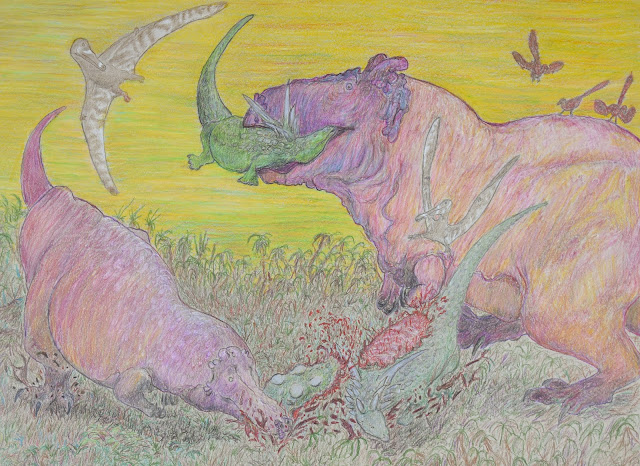 I have to say that writing this book was like an intellectual enema, I just had to get it out of me!! Ever since I wrapped up my blog antediluvian salad I have had this vision of producing my stab at a dinosaur magnum opus - a stand alone piece of work that can serve both as a bench mark for the ideas I developed on my blog and a launchpad for other strange and exciting new vistas. I succeeded in this quest in a manner that even I did not anticipate and, more than that, the breadth of ideas developed here offer more than enough cannon fodder for future works. This book does not shy away from the disruption of our times, but hugs it in an almost incestuous manner. Is this book a documentation of one man's descent into lockdown madness? An ecological-political manifesto, subtly (or ham handedly) designed to corrupt the youth? A confusing tirade against establishment ideas? All of the above? I'll let you decide and marinate on these ideas as you see fit. But I assure you that you will be hard pressed to find another book quite like it in the cannon of not only dinosaur books, but ecological/nature/biology books in general. Buckle up kids, cuz this is just the opening salvo!!

For several decades a glut of new information has created a golden era in dinosaur studies. While the scientific methodology underpinning this sustained revolution has been robust, myopic tendencies have created entrenched gaps in our idea making and narrative creation. This book is a bold attempt to fill in some of these narrative blank spots, often times in strange, unexpected, and utilitarian ways. Nash offers a customized "bounded speculation" approach to his idea making, resulting in a breadth of new thought for dinosaurs including their anatomy, physiology, ecology, diet, biting technique, soft tissue and reproductive strategies. Not since Robert Bakker's Dinosaur Heresies has a dinosaur book offered such a bold, compelling, vast and visceral shotgun blast to not only dinosaur establishment, but academia and the dominant Neo-liberal cultural underpinning. Nash seamlessly blends the kaiju/archetypal sensibility of dinosaurs with their biological and ecological reality but suggests that this blending is not only unavoidable but ultimately useful. Dinosaur Enlightenment is a book that can be seen on many levels and in many directions all at once. And in era of ecological, environmental, social, and political disruption Dinosaur Enlightenment offers the hint of an unexpected, but strangely familiar, path forward.

With over 160 visuals including 50 never before seen illustrations and over 15 reworked images; 420 pages, and 20 chapters Dinosaur Enlightenment is a juggernaut hail marry of paleo provocation!! You might feel alternatively happy or elated at the ideas I present but one thing is for certain - you might never look at dinosaurs, birds, or even our own species the same!! Making the strange normal, and the normal strange!!

In New World, if players find something difficult, buying New World Coins at IGGM is a smarter way.