Urine For Some Trouble... Renal Wars

Anyone who has kept or lived with cats is probably all too familiar with one of the more unfortunate byproducts of Felis domesticus- cat piss. Yes it is bad enough that they always have to deposit it in the corner of the litter box, but the toxic aroma of all that nitrogenous waste gets really bad if it soaks into your carpet, wood, mattress, or favorite t-shirt. That cat piss smells so bad and that we are so overwhelmingly repulsed by it is a natural byproduct of a protein rich diet and that nitrogenous waste is toxic to life.

It goes something like this: Nitrogen derived from proteins and nucleic acids are continually being broken down during an animals life. Although some of this nitrogen is reused, the vast majority of it enters the bloodstream as waste where it is bound up with hydrogen to form ammonia which is filtered by the kidneys and formed into a less toxic but highly water soluble product urea. And finally what you see in your toilet or what your cat deposits (hopefully) in the litter box is urine. Urine is actually a mixture of water, urea, sugars, elements and various other compounds. But urine in mammals is generally mainly water due to the water solubility of urea. Here is a more in depth look at the physiology of mammal urinary systems.

I also keep a corn snake as a pet, and although it also ingests a high protein diet, I can't really say that I have the same problem with snake piss as I do with the cat piss. In fact I can't really say that my snake pisses at all. This is due to the fact that reptiles and birds have an entirely different urinary physiology than mammals. They do not produce urea or urine as a final product, instead they produce uric acid.

In the pic above of some chicken crap you can see the uric acid as the white chalky material on the right. And of course bird crap is familiar to anyone who has looked under bird nests or bird roosts. And if you have had the misfortune of living in an area full of seagulls (like me) or other birds you likely have at least once in your life had the misfortune of getting crapped on by a bird. But, given that bird crap is a composite of ingested waste as well as uric acid it is probably more accurate to say that you were crapped and pissed on by a bird simultaneously- double jeopardy. Here is a good write up of the physiology.

Now anyone who has suffered from gout may know that uric acid is not very water soluble so when uric acid is voided by reptiles and birds it comes out as a viscous white, pasty semi-fluid or even solid "chalk". But while gout in humans is generally seen as a product of western diet/ with

genetic input which results in high uric acid recrystallization and subsequent inflammatory response- reptiles and birds actively synthesize uric acid from urea. And although uric acid production is more energetically costly than urea production- animals that produce uric acid have the advantage of voiding less water with their waste. The water saving capacity of animals that produce uric acid, as well as the water losing nature of urea production, has profound affect on the ecology, behavior, and activity patterns of these animals. In water limited environments this is especially pronounced. Indeed, if one lives in an arid or semi-arid environment one need only take a short day hike to realize this. For every mammal that you spot out and about during the day, you will probably see several dozen birds and reptiles. Its not that the mammals are not there, as in most cases rodents are probably predominant vertebrates- they are just in hiding to avoid excessive water loss.

And if we invoke the en vogue methodology of phylogenetic bracketing it is immediately apparent that dinosaurs, nestled nicely between reptiles and birds, almost certainly produced uric acid and not urea as their chief method to void nitrogenous wastes. And just as the urinary physiology of modern animals affects their ecology, behavior, and habits so it must have been for dinosaurs during the Mesozoic.

The Mesozoic was characterized by higher temperatures and higher aridity on average than the Cenozoic. Many of the most notable dinosaur formations, such as the Nemegt and the Morrison,  are characterized best as semi-arid or desert. And even in wetter areas, a monsoonal regime with a pronounced dry season , seems to have been predominant. An ability to save and conserve water by producing uric acid would have provided pronounced benefits for dinosaurs, especially for the mega-herbivores who may have had to travel far and wide for vegetation. A sixty tonne Argentinosaurus that can recoup much of the water it ingests from its diet as well as go for several weeks without drinking, has a distinct advantage over African bush elephants (Loxodonta africana), which are dependent on the accumulated knowledge of matriarch females and must drink at least every 2-3 days up to 190 L/ 50 gal of water.

If we extend out this argument that dinosaurs were less be-holden to water resources than mammals I believe we can make some inferences about how this difference affected the entire ecosystem.

While the negative effects of livestock on riparian habitats is well documented large mammalian herbivores can also rapidly deplete vegetation around water holes even in natural settings. Just look at any picture of an east African watering hole during the dry season. The large mammals can not travel very far from the water source and the surrounding vegetation is both consumed and trampled. There literally is not a a riparian zone or any vegetative zone to speak of adjacent to the water.

Everything is either consumed or shredded by sharp mammalian hooves. East Africa with its bevy of large megafauna naturally invokes comparisons to dinosaur ecosystems and this idea of the dinosaur watering hole is well entrenched in dino art/culture. Just check out the pic below from Reign of Dinosaurs.

But such scenes were the exception not the rule in my opinion. In addition to their superior renal physiology which did not constrain dinosaurs to water to the extent of large mammalian herbivores, several other factors are suggestive of relatively lessened burden on riparian vegetation. Large herbivorous mammals in xeric habitats got it rough. Large herbivorous mammalian mothers in such habitats got it even rougher. They absolutely need to drink to keep lactating and feeding their offspring. Mother dinos were under no such constraint.

Dino feet, unlike the sharp/hard hooves of the majority of mammal herbivores were relatively soft and padded. They would not dig into the substrate damaging biological soil crusts and roots. The affect of feet upon soil, often overlooked, can dramatically alter the landscape when the actions are repeated ad nauseum.

Dinosaur reproductive biology differs dramatically from large mammalian. Unlike say a herd of wildebeest in which the majority of individuals are fully grown- in any dinosaur population the population would be skewed towards smaller more immature individuals. So although dinos were absolutely larger than mammals, they were on average a lot smaller than generally portrayed. A good window into this would be to look at the size range in a population of crocodiles. Very few large adults, numerous subadults, and abundant young/hatchling. Herds of fully mature dinosaurs were likely few and far between, the vast majority of dinos were immatures and their effect on water resources was likewise smaller. 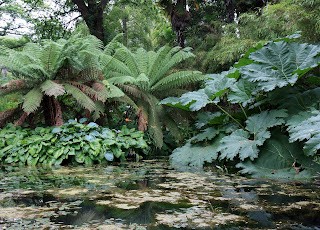