In Australia Camels Eat Your Toilet

Never mind dingoes eating their babies, now Australians have to worry about camels eating their toilets. As if cane toads, plagues of mice, and the ravages of global warming was not enough for the peoples and environments of Australia to endure the island continent now hosts about 3/4 million feral camels. And stories of desperate herds of camels plundering human irrigation systems, including breaking into the loo and destroying toilets in search of water have begun to trickle in from the outback.


Now, as the case with most invasive species, the usual charges of environmental degradation have much maligned Australia's feral camels- which include the only truly "wild" Dromedary camels left in the world as well as the endangered Bactrian camel. Camels destroy and foul water sources. They over browse the native vegetation at population densities greater than 2 per square kilometer. They don't respect aboriginal sites or the fences of cattle ranchers, often times destroying the latter outright. They eat 80% of the plant species available. This outcry over the depredations of feral camels resulted in a recent government sponsored culling of about 100,000. Subsequent droughts have since lowered the population from a high of about 1 million to about 750,000. 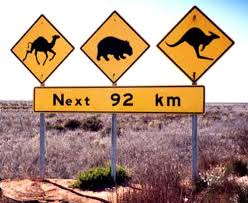 But if you look back at the history of the camel in Australia a similar dubious light is cast upon the creatures relationship to the peoples of Australia.

Camels were originally imported to Australia as beasts of burden to assist in the conquest of the arid interior. Horses, donkeys and bollocks were used initially but expeditions utilizing these animals often met disastrous results- not just for want of feed and water, but because they were reportedly "spooked" by the terrain of the Australian outback. The importation of camels, and their Afghan cameleers- dubbed "Ghans"- proved pivotal in the conquest of the outback resulting in such infrastructure projects as the Overland Telegraph and Trans Australian Railway.
But the Afghan cameleers, later including Islamic men form other middle eastern countries, were not met with significant fanfare by Australians. They set up their own communities, mosques and business ventures. They married aboriginal women and, to the dismay of Aussies, were not afraid to go on strike. Fear, mistrust, and racism was rife. Their camels, despite the critical link they provided in the movement of goods and water, were accused of fouling water sources for livestock. And when the car and railway made the camel obsolete in the early 1900's the days of the Ghan were numbered. Many did not have their contracts renewed and moved back to and remained in their home countries. Those that did seek to return or remain in Australia were denied access on account of the Immigration Restriction Act of 1901.

The strange and little known history of Islamic cameleers in the Australian outback unceremoniously came to a close. Here is an account of one of the few remaining mosques from reCollections, the Journal of the National Museum of Australia.

In the Adelaide summer of 1952 a young Bosniam Muslim and his friends, newly arrived immigrants, pushed open the high gate of the Adelaide mosque...As Shefik Talanavic entered the mosque courtyard he was confronted by an extraordinary sight. Sitting and lying on benches, shaded from the strong sunshine by vines and fruit trees, were six or seven ancient, turbaned men. The youngest was 87 years old. Most were in their nineties; the oldest was 117 years old. These were the last of Australia's Muslim cameleers... Several had subscribed money during the late 1880's for the construction of the mosque which now, crumbling and decayed, provided their last refuge.

But far from fading into obscurity, Australia's camels have proved quite robust in their new home. Released into the wild when they proved obsolete, a founding population of a few thousand had grown to close to a million animals. The government began a cull of about 100,000 and then the droughts, substantially lowering the population. But a contingent of voices has arose in defense of the feral camels of Australia.

Unlike cattle, horses, sheep and other livestock which humans place in arid lands- camels are true desert  specialists. Their broad, splaying feet do not cut into the shallow dirt causing erosion and damaging soil and root integrity.

Although they do eat 80% of the plant species available to them, their nomadic nature prevents substantial over browsing. And the wide swath of vegetation they go through means no one type or level of vegetation is hammered. Primarily browsers, camel will eat grass occasionally but it does not form a significant component of their diet. No doubt when allowed to proliferate unchecked camel populations can outstrip preferred vegetation such as has been observed with camels over-browsing Quandong trees.

Looming over the whole camel debacle is the cattle industry of Australia. We have touched upon the issue of cattle in arid regions in Cowboys and Dinosaurs before. While the lamentations of those calling for camel reductions will sound off loud and hard about the devastation 1 million cattle wreak ecologically on the outback nary a voice is raised over the 28 million head of cattle on the continent of Australia. With more cattle than people Australia is the second largest exporter of beef after Brazil. While no doubt camels can do damage at high populations, it is hard to argue that the damage they do is worse than what cattle do. The people, economy, environment and ecology of Australia is beholden to cattle.

Interestingly some innovative Aussies have already begun to run camels commercially for export, both for food and sport. Although a delicacy in several southeast Asian and Middle Eastern countries- the economic reality of harvesting, shipping, and marketing this meat from the remote interior has not yet taken off for whatever reasons. Not surprisingly Aussies themselves have not taken to feasting on their feral country mates. Don't expect to see camel on the menu at Outback Steakhouse any time soon.

And a new voice has entered the fracas of the camel issue, a voice from the past. Ecologically Australia has supported several large browsers in the recent Pleistocene, the giant wombat Diprotodon and the giant short faced kangaroo, Procoptodon. Camels, it is argued, fill the gap of the large browser that always existed here. Not only are camels OK for the outback- they
benefit it. By eating away thick brush and scrub the torrential fires that plague Australia are lessened. And by creating gaps in the brush, smaller animals find valuable fire escape lines. What we are really talking about here, and what may in fact be happening in real time, is the controversial issue of "rewilding" in which formerly extirpated/extinct species or, in this case, proxy species, are reestablished in their proper ranges. The goal is not so much to recreate, but recalibrate, a more complete ecological panoply.

But what is missing here is control. Now a million camels seems like a lot, but spread over the whole arid interior it is really not that daunting of a population. Certainly if Aussies don't find a way to sustainably and economically manage the herds of camels either by exporting the beasts or serving them up as tucker we can expect that droughts and starvation will have the final say (the camel population is remarkably disease free being descended from imported healthy stock). Or we look towards other means of control. Both Diprotodon and Procoptodon had to contend with Megalania, which most likely behaved like a hyped up Komodo Dragon. Of course we can't bring back Megalania but some have suggested another option. Far from being a small island endemic, recent findings suggest that Komodo Dragons were in fact quite more widely distributed throughout southeast Asia and Australia than their present range suggests.


Is it time to repatriate the lizard king to help control the ferals of Australia? Something tells me the cattle ranchers might have an opinion on that.... 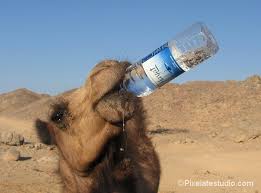 Camels to Rescue in Ecosystem

Tens of Thousands of Feral Camels Culled in Australian Outback

Why can't we just restore Megalania?

You just need to take DNA from crocodile monitors, Komodos and lace monitors and fit them into the right places to recreate Megalania genome, then inject that into egg cells and voila!