As much as I would like this blog to remain apolitical I do find it ironic that Hurricane Sally aka "Frankenstorm" is poised to plow into the Northeast around Halloween and potentially play a pivotal role in voter turnout. Why I find this ironic is that neither candidate has mentioned scarcely a word regarding climate change or "global weirding" as I prefer to call it (hurricanes in North America occur when surface water temps get above 80 farenheit in the Gulf). Perhaps like a pesky environmental toothache it will simply go away if we ignore it? Not so from the perspective of climate change in the geologic record. Whether our current predicament is man made, a natural oscillation, or a combination of the two- climate change is the rule rather than the exception in earth history. No one is gonna care about the unemployment rate if we can't afford to buy food...

A warming globe will not be bad for all. If you are a jellyfish, algae or parasite bring on the heat!!!

And indeed climate change trends seem to be tipping the scale in favor of the parasitic biting insects at the expense of caribou herds in the far north. 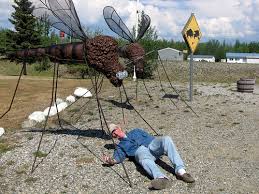 Although it may be a little surprising to some that mosquitoes thrive in the tundra- it is no surprise to the people who live there or the caribou herds that they harrass. And harass is the key word here because these "micropredators" exert a strong influence on the caribou herds and how they move across the landscape. While in the past these hordes of insect predators kept the herbivores moving and likely had a beneficial effect on the environment as a whole by preventing overgrazing the balance of power is being tipped ever so slightly in the favor of the insects in these northern lands.

Due to summer arriving earlier the bugs are getting the jump on caribou by breeding earlier and swarming in increasing numbers far longer into the season. Now if caribou started calving earlier with the warmer weather this threat would be partially nullified but the herds are so far sticking to their normal calving times. Quite simply the bugs are adapting quicker to climate change than the caribou. While caribou have always dealt with some level of bug harassment by seeking high elevation, strong winds or cool water the biting bugs are proving relentless especially towards mothers and calves who are not feeding properly and putting on necessary weight during the critical summer months.

Many herds are already showing losses due to the bug harassment as well as from fundamental changes to their ecosystem. As the tundra warms, southern plant biomes move northwards replacing the caribou's preffered fodder of lichens, grasses, and forbes. And this is not the first time caribou have been hit hard by climate warming. Hopefully this is not the last time the great northern caribou herds face down the 1-2 punch of insect harassment and diminution of preferred habitat.

A Troubling Decline in the Caribou Herds of the Arctic