Ok, Ok, Ok- after the throngs of requests for a new post from my minion(s ?) I got something for ya' all. Honestly I just started Calculus and Organic Chemistry so about a post a week is how it will be for awhile.

Because we are at the tail end of summer and shark week just went down- all things sharky are on my mind. But this post also serves a dual purpose of acting as a bit of a prologue to my next installment of This Island Earth- where I will be talking about the importance of large predators in a healthy ecosystem. Now the classic study that has recently came out in these regards is the ecological cascade that occurred with the reintroduction of wolves into the greater Yellowstone area. Long story short the return of the wolf allowed for a diversification of songbirds, Willow/riparian vegetation, scavengers, and beavers. Read about it here.

Now you might already be familiar with that ecological parable, if not be sure to check it out. But I want to focus your attention to another, lesser known, analysis of the effect of a top predator on a ecosystem- tiger sharks (Galeocordo cuvier) in the seagrass beds of Shark Bay western Australia.

Seagrass beds are a little appreciated, but highly productive, marine ecosystem. Along with mangroves, seagrass ecosystems represent one of the few examples of flowering plants (angiosperms) successfully invading the marine realm- complete with submarine pollination. Over 60 species exist worldwide in tropical/temperate seas and are important primary producers where they occur- providing food and habitat for a plethora of critters. They only exist on sandy bottoms in the photic zone and, like coral reefs, are highly sensitive to perturbations in nutrient levels. Too much nitrogen/phosphorous stimulates algae growth in the water column- blocking out the sun- and eventually the system degrades to a algae dominated soup. Probably does not surprise you to learn that seagrass is declining worldwide. Oh yeah, and seagrass might just be the savior to coral reefs.

Seagrass is also important as an ecosystem engineer. The large beds inhibit tidal and storm surge as well as building up on itself creating vast shallow beds with tremendous primary productivity. The effect is basically that of an "underwater grassland" and the analogy is apt.

A UNESCO world heritage site, Shark Bay contains the largest example of an intact seagrass dominated ecosystem in the world. Much like the coral reefs I talked about here, Shark Bay provides a unique opportunity to study a relatively pristine environment- less than 1000 people inhabit the 1,500 km of coastline that the bay encompasses. Although the bay is huge, covering 10,000 square km, the average depth is fairly shallow at about 10 meters owing to seagrass' ability to modify its own habitat.

Of course a habitat of this type is bound to attract some animal life and Shark Bay does so in spades. The bay is home to about 10,000 dugongs as well as abundant bottlenose dolphins, pied cormorants, sea snakes, loggerhead and green sea turtles. And lording over all of these is the brootal tiger shark. How the tiger shark affects these species- both by preying on them directly and by just simply being around- is the crux of this article. 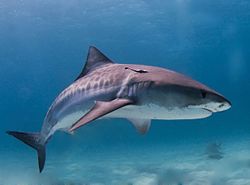 Don't let the pop science mantra of "mistaken identity" fool you- the tiger shark has and does actively eat humans- and just about anything else it comes across in the sea, earning the dubious nickname "trashcan of the sea". It just happens to be that in aptly named Shark Bay mammals, birds, and reptiles happen to be on the menu in addition to the usual fare of fish and inverts. How these interactions affect these critters and the larger ecosystem has begun to be illuminated through the Shark Bay Ecosystem Research Project. The dugong (Dugong dugon) is technically the only herbivorous marine mammal (close relative the manatee is not 100% marine) and is highly dependent on seagrass- often eating both the blade and root of the seagrass- acting as a "whole plant predator". What the researchers found is that, due to tiger shark threat, the dugongs in Shark Bay avoid foraging in the exposed middle of seagrass banks even though this area has the most nutritious grasses. Instead the dugongs, as well as the green turtles, concentrated their foraging efforts in the edge of seagrass banks- where the threat from tiger sharks was minimal. By establishing test enclosures the researchers observations were supported.

Interestingly both bottlenose dolphins and plied cormorants avoid areas where dugongs are plentiful, because tiger sharks are plentiful there as well. And these habitats are rich foraging grounds for the birds and dolphins due to the abundance of small fish, but simply not worth the risk. Don't let the image of dolphins as "people of the sea" fool you- large sharks commonly catch, kill, and eat dolphins (u r warned violent here)- and have tactics to do so. So in effect, the presence of dugongs actually discourages both pied cormorants and bottlenose dolphins.


To add another element to the story, small seagrass consuming fish such as striped trumpeters may be winning out big because tiger sharks are keeping their predators (cormorants/dolphins) and competitors (dugongs) at bay. How and if these fish inhibit seagrass cover is yet to be determined...


One final tid bit. Paleo folks might also know about Shark Bay because of stromatolites, which thrive in the hypersaline shallows of Shark Bay. Indeed hypersaline Shark Bay is the only known occurrence of these ancient accretionary cyanobacteria biofilms. Shark Bay maintains a salinity higher than the neighboring open ocean because it is so shallow and the high evaporation rates of hot subtropical Australia concentrate salt. As I mentioned earlier, it is the seagrass banks that create this extensive shallow gradient. So if the seagrass creates the environment for hypersalinity, which allows stromatolites to persist, and tiger sharks preserve the seagrass banks- can we say tiger sharks preserve the stromatolites? Are there any known Mesozoic analogues of seagrass? It seems like this niche would be common in Early Cretaceous Europe and other continental seas (speaking of which- are there any geographical reasons for places to have rock or sand, and thus coral or seagrass?), but I've no clue what would grab it- or if the 'algal sands' would be there without seagrass to compete.

Good question!! I have not heard of anything.