While Shark Week was busy finding out what Megaladon could bite through, other more meaningful studies escaped mention in their week of carnage. One particularly relevant bit of knowledge gleaned from studies of the few pristine reef ecosystems left is that sharks- and other predatory fish like jacks and groupers- dominate these systems in terms of biomass. They seem to break all the text book food chain-pyramids we have come to understand as to how normal ecosystems works.

These coral reefs have inverted the classic biological food chain. How have they done this? And why does it matter that the vast majority of coral reefs are no longer like this? Surely having such predator dominance, 85% top predator biomass in some Pacific atolls, is not sustainable?

And as it turns out, the reef communities studied with top predator dominance invariably had healthier corals with abundant coral recruitment and greater diversity levels overall than those with less abundant predators- they were also more resistant to perturbations in temperature, pollution i.e. coral bleaching. But because of their slow reproductive rate, fishing- even at subsistence levels- has a more dramatic and long lasting effect on shark populations than other fish. And when the sharks are gone coral communities tended to look like this for a while:

Looks pretty inviting, doesn't it? In fact the above view may be what many of us picture a pristine, healthy reef to look like. At the very least it is the type of reef that is inviting to recreational diving. But a growing body of evidence is suggesting that many coral reefs like the one pictured above are in a state of decline for their lack of large predatory fish.

For reasons not yet fully understood picturesque reefs like the one above are transforming from coral/fish/invert dominated systems to algae/bacteria/planktivorous small fish dominated systems in the absence of large predators. So while tourists might prefer to swim in a reef swarming with colorful reef fish, they are in fact swimming in a reef on the edge of collapse. Although a little more intimidating a reef like the one below with slightly hungry sharks cruising past always on edge reef fish offers a view of a much more healthy, intact reef ecosystem. 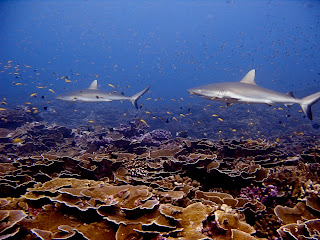 So if you took the time to watch any of the rehashed bits on shark week you should take the time to watch this clip below and really learn something about sharks and that ecological buzz phrase of "top-down control".