Hey now.... some new stuff going on in Castor land. Yesterday saw the unveiling of the magnum opus on beaver restoration The Beaver Restoration Guidebook: Working With Beaver to Restore Streams, Wetlands, and Floodplains pdf here. I am greatly pleased with the work and it is most useful to have so much pertinent information at hand in one spot that can hopefully guide future beaver restoration/protection work. Great job and kudos to Castro, Pollock, Jordan, Lewallen & Woodruff (although you guys just gots to put southland beaver in your list of beaver links/blogs, come on now!!) 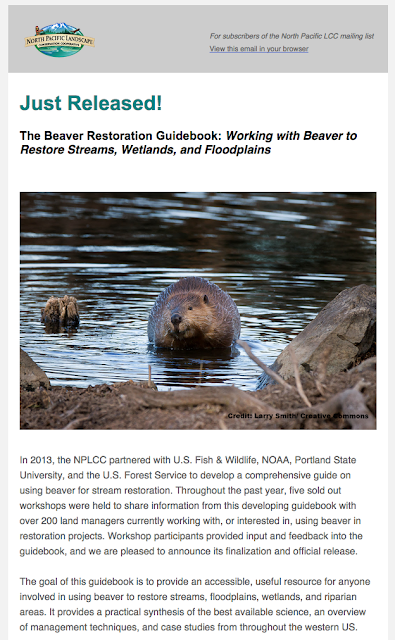 Last Saturday I took a trip to check out the beaver activity at my usual spot on Santa Ynez river of Santa Barbara county. Last summer I was gravely concerned for the ability of these beavers to survive the excruciating drought conditions of this watershed. I was pleasantly surprised when I saw fresh beaver sign in October of last year in an area that just several months prior in late July was bone dry - and bone dry for at least several months. This got me thinking about how these beavers survive these conditions. Do they migrate up or downstream? Relocate to nearby golf ponds? I now think that these beavers in fact hunker down in their bank burrows and just wait out the dry season - an idea I elaborated on in my last post: Do Drought Prone Beavers Aestivate?

The answer to that last question - if you are not among the 41 people who actually read it on this blog - (sheesh people come on this is a very interesting topic, I put that post on my paleo blog and it has got over 400 hits as of today!!) is that they probably don't aestivate in the truest sense of the word (asestivate is basically a summer hibernation) but that they probably do go into a bit of slight summer torpor. This is more or less analogous to the winter adaptation of cold adapted beaver. By staying in their cool bank burrows, largely living off fat with minimal foraging, and generally shutting things down a bit and staying out of sight of predators these drought tolerant beavers have adapted to an ephemeral water regime. And that is my working hypothesis so far.

The evidence I observed on this trip is very much in line with that idea. 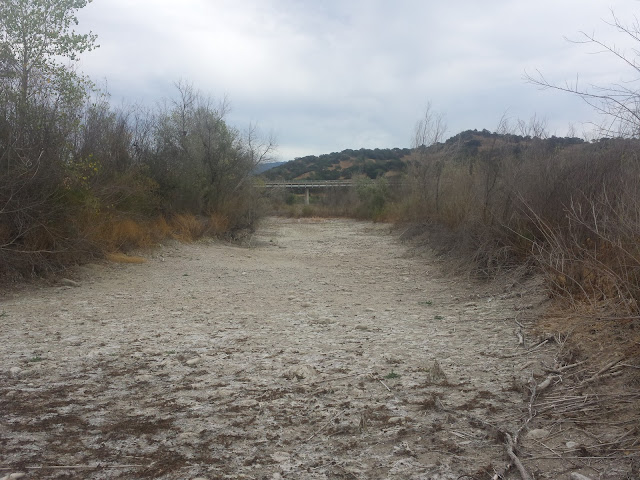 Above is the state of the river very close to the first beaver denning area I have identified. Notice how many of the willow have already lost their leaves - it appears the vegetation here has also adapted to such a strong oscillation of seasonal water availability. 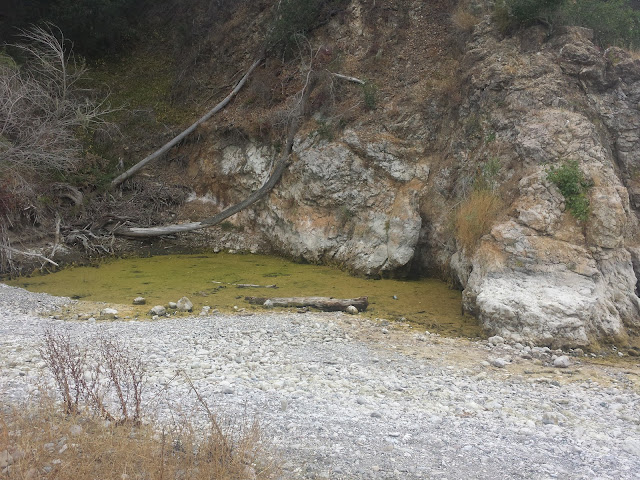 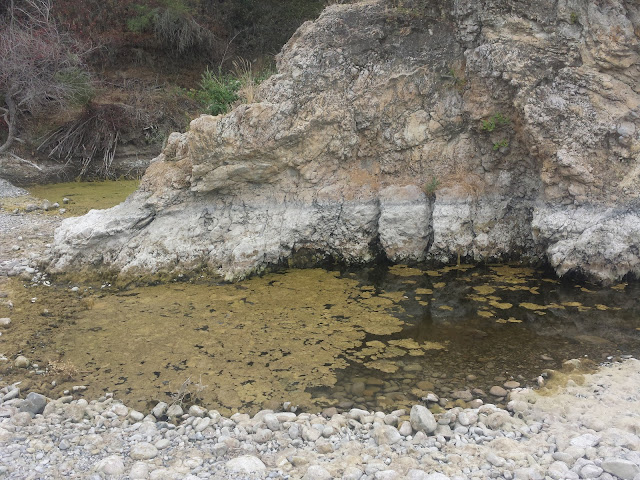 These are the two pools that remain in the river immediately adjacent to several bank burrows currently underwater. I think that the beaver depend on these relict pools of water until Cachuma dam release flows occur in late August - October. You might not immediately recognize this as active beaver habitat but check out these pics below. Can you see that fairly obvious and well marked trail above the water line, and what appears to be a bit of a browse line on the hillside vegetation? I don't think that the beaver eat very much this time of year, just enough to keep up their intestinal biome. But those are beaver sign in my estimation and the proximity to the water allows quick escape from predators into their underwater bank burrow. Later on by late July/August this area will be almost completely dry with the burrow exposed. 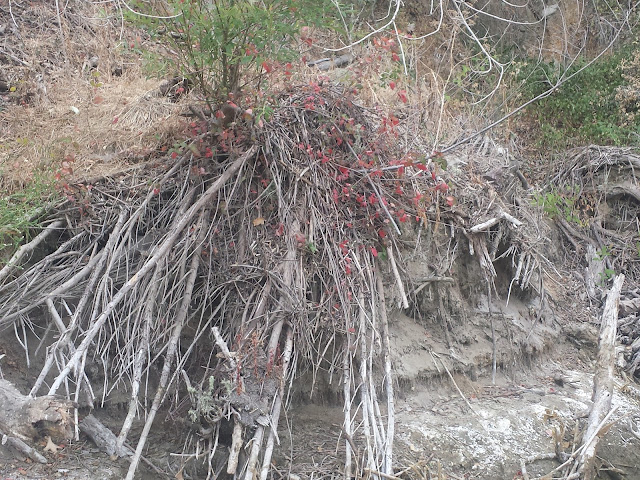 And the real clincher was a pretty obvious rear beaver paw track at a nearby grimy little pool. 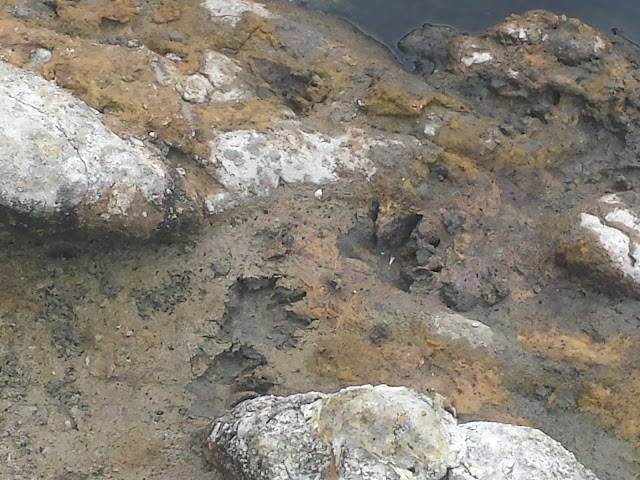 I then moved on to a site further upriver that maintains pools into the dry season, has loads of bank burrows, and a series of pretty spectacular beaver ponds adjacent.

The beaver ponds had seen better days and there was no fresh sign, probably because foraging here this time of year exposes them to predator risk. 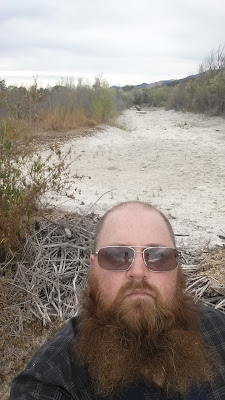 As you can see these series of ponds dry out completely and this seems to be the pattern every summer I visit them. I consider these to be more satellite territories as I have never seem any evidence of bank burrows, lodges, or permanent year round habitation. When the water returns the willows and especially the cattail beds become flush with life and as soon as that happens I see beaver activity here, especially uprooted cattails. It is also worth noting that the dams are all quite leaky and often fall into disrepair.

I often hear about how diligent beaver are about damming up the slightest leak in their dams. But the beaver who frequent these dams appear to be a little blase about keeping super tidy dams. They just want to slow the water down enough for the emergent vegetation to get a good toehold.

Where I think the beavers who frequent these "satellite ponds" live is in an adjacent stretch of the river where again we see the same pattern as the first bank burrow. Fairly steep gradient, sandstone or loose alluvial soils, large tree roots providing anchorage, north facing for coolness, and at least some persistent pools of water providing drinking water well into the dry season.

This picture below captures that area where there at least half a dozen bank burrows including the only recent chew marks on a tree I saw on this visit. 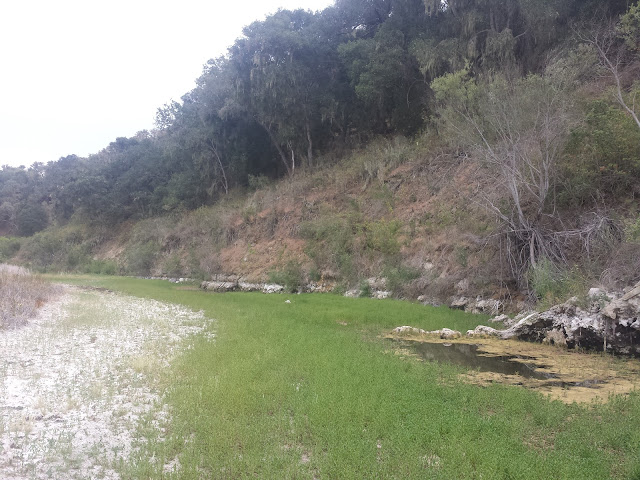 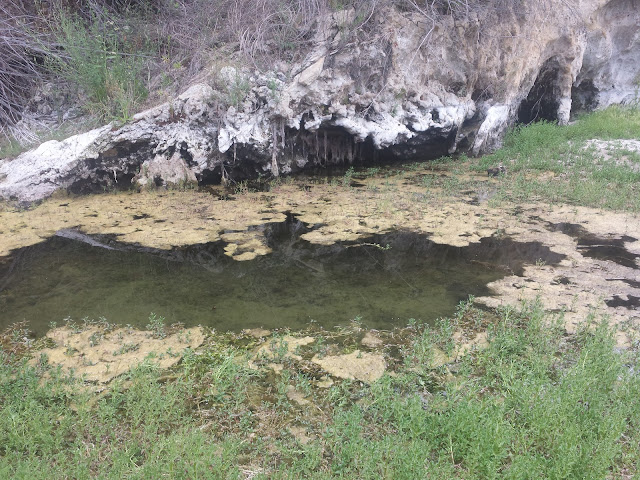 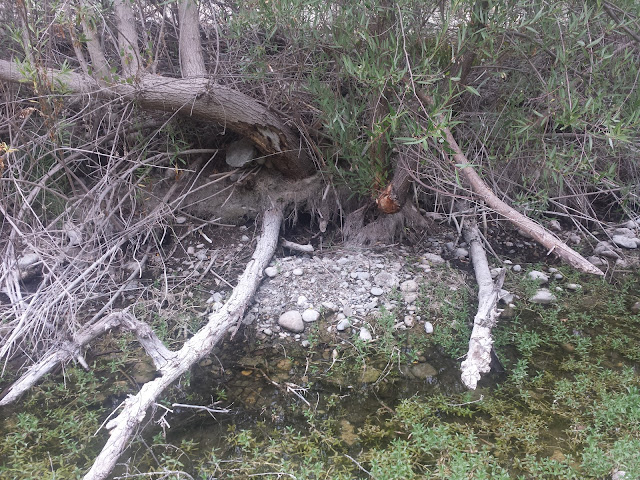 Note the fairly recent chew mark on a willow adjacent to this bank burrow built into a large willow root ball. I got a close up below unfortunately my focus was a little off. 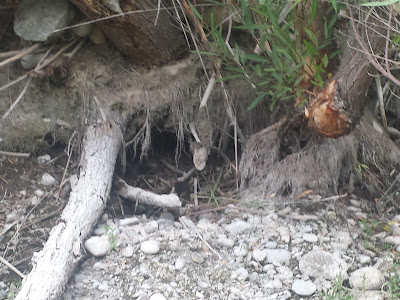 I think that beaver might often resist chopping down the trees that their bank burrows are built into or are adjacent to. They provide stability to their burrow and cover from predators.

I saw little in the way of aquatic life, native or non-native. In the past I have found abundant crayfish, bullfrogs, and bullfrog tadpoles in these ponds. But several years of brutal drought have killed them off as well as a big ol' blue heron I see every time I come down this stretch. I have seen a trout fry at least once in the first pool but no fish at all this time. I saw a western pond turtle once, but they, like the beaver are likely sequestered away this time of year in burrows. I saw abundant CA quail, wild turkey in the river bed for the first time, and red tailed hawk as well. 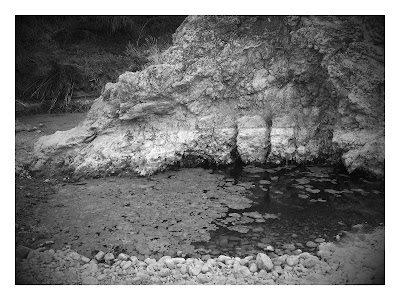 Sorry Heteromeles I accidentally deleted your question. And to answer your query are there still beaver in the watershed I think yes. They have adapted to a river that seasonally dries out. They do this by largely retreating into their bank burrows. Who knows they might be quite elaborate and deep.