A few months ago I wrote a post called Black, White, and Red All Over: Orcas Penetrate the High Arctic detailing how orcas are making inroads into habitat formerly off limits to them due to global warming. The ice melting earlier and staying clear longer allows killer whales to exploit ice specialist cetaceans such as narwhal and beluga and we may be seeing killer whales replace polar bears as top predators of the high arctic. This ecological shuffling of the deck is something we should expect to see more of in a rapidly changing climate and for this post I want to concentrate on the interesting predator ecology of the southern Antarctic and subantarctic waters with special emphasis on two predators in particular - Antarctic toothfish (Dissostichus masoni) & colossal squid (Mesonychoteuthis hamiltoni).

They say a pic is worth a thousand words right? The above ugly maw belongs to an Antarctic toothfish, kissing cousin to the Patagonian toothfish, and both often times labelled as "Chilean Seabass" to entice gourmands to eat such a brutal looking creature at 20$ lb. Nice video on the fishery. What should not go unnoticed is the large sucker scars from colossal squid - are some of those healed scars? A more nuanced relationship between these two southern juggernauts than previously recognized is the focus of a study by Russian researcher Alexander Remeslo and others looking at the sometimes prey, sometimes predator relationship.

What Alex and his colleagues did, and many marine researchers do who study remote ocean organisms do,  was to hitch a ride on an oceanic trawler, in this case South Korean longliners, fishing for the south poles equivalent to pelagic sharks - Antarctic toothfish. They had the express purpose of looking at depredations by squid on hooked toothfish. But in looking at damage incurred on toothfish by colossal squid and taking a peek inside the belly of the toothfish these researchers were able to document a variety of interactions more complicated than the traditional view of toothfish as the obligate prey of colossal squid.

Not surprisingly colossal squid, which in recent years has turned out to be a cryptic, sluggish, low metabolic ambush predator of the  s  l  o  w  e  s  t  order does take advantage of toothfish caught on longlines, evinced by the distinctive swivel hook scars from their suckers and chunks taken out of the fish by its beak. In light of the fact that colossal squid are not pursuit predators but ambush predators
(or possibly they lure prey with bioluminescence?) it does make sense that they would feed on  toothfish in a weakened state caught on longline, according to the study depredation rates of about 1%. 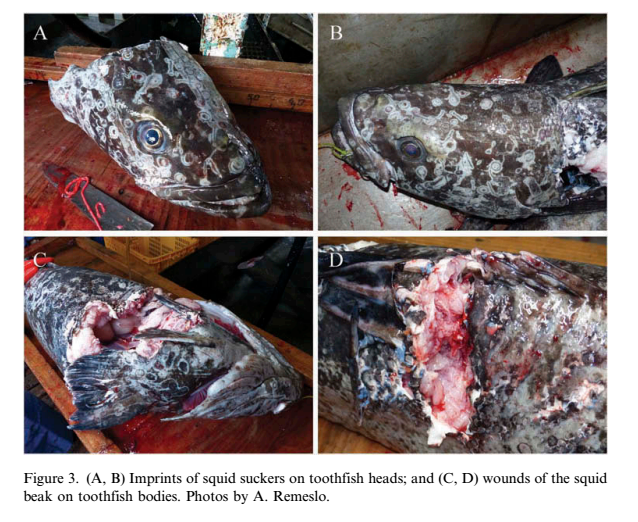 But what was not so expected was the rate at which colossal squid was found inside the tummies of the toothfish. In the various Antarctic seas that they collected data from colossal squid was found inside the stomachs of toothfish from .33% to 6.30% (interestingly the Ross sea did not have interactions between toothfish and squid in any form?). This equated to 11 - 20% by bulk weight of the fish's diet. Now that is substantial.

Now usually the squid remains indicated an animal smaller than the fish in question (colossal squid get up to about 500 kg, toothfish about 80 kg) but there was an important exception that was recorded in this study. 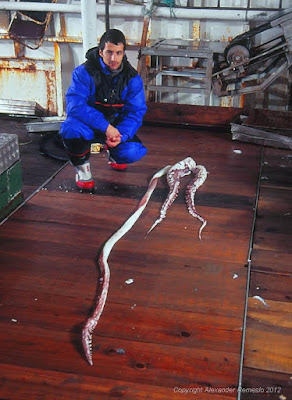 The complete tentacle with club as well as two arms was retrieved from the stomach of a toothfish as pictured on the left. As you can see these remains - which weight in at about 7 kg - hint at consumption of part of a particularly large colossal squid by a toothfish that weighed 70 kg.

Was this a predatory event or scavenged?

Now the authors - as well as the article in deep sea news about this paper - suggest that this parcel of colossal squid was either scavenged or taken off of an ailing individual. Possible predators the authors note that could have set the table for such a morsel ending up in the stomach of the toothfish include; sperm whales - which were witnessed at least once by the authors; and other colossal squid - the authors note that  cannibalism is common in teuthids and most attacks concentrate on the mantle, leaving the tentacles behind which are then easily scavenged. 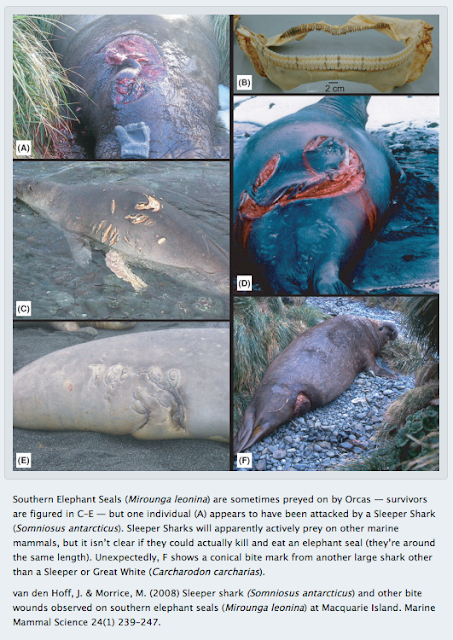 Now whether or not attempted attacks on elephant seals by southern sleeper sharks are ever successful is debatable - but given colossal squids' adaptation as a very slow, drifter I think we should consider sleeper sharks as a predator of even large adult individuals. Regardless, data does not suggest southern sleeper sharks even range  far enough south into the habit of Antarctic toothfish. And, although data is lacking, maybe toss in killer whales and various pinnipeds as potential predators of colossal squid - especially elephant seals, southern fur seals, and leopard seals.

But there is another possibility, one that both the authors of the study and the deep sea news out-right dismiss, that the Antarctic toothfish bit those arms off of a healthy colossal squid itself.

The reason why they assume that these remains do not evince a predation event is that the colossal squid is larger and that the teeth of a toothfish are ill-equipped to wreak such carnage i.e. "too needle like". Let's unpack this a bit.

Above is nice hefty colossal squid specimen photo provided to me by Alexander Remeslo. It is probably not too dissimilar in size to the specimen that was partially consumed by the toothfish as discussed above. Again, keep in mind that these were very slow, unathletic predators.

And above is a good sized Patagonian toothfish (very similar to the Antarctic species) . In my mind a fish of that size, with that musculature, with those teeth could easily take off a couple of tentacles from a large colossal squid by simply grabbing and shaking/spinning. I have discussed this issue before with respect to marine predators (esp long necked plesiosaurs) just because you do not have large, serrated teeth does not imply that you can not break apart large carcasses. Look at a crocodile death roll, or any number of eel species wrenching apart carcasses (including large cephalopods), or bichir fish in your home aquarium. If you have conical non-serrated teeth, a long muscular torso, and the bite to match - simply get the leverage right and rotational torsion does the rest.

To prime your mind just a bit just watch this insane clip below to see what a group of (smaller) Chinaman Leatherjacket (Nelusetta ayraud) do to a larger octopus that they corner.


When I watch some of the plethora of online videos showing toothfish longlining hauls they all seem to be of the same size class... do we know if toothfish travel in schools? If so that would tip the scale a bit in favor of a fish that has to deal with several potential Antarctic predators and also maybe suggest a way to tackle large prey...

And finally let's keep in mind that colossal squid are not top predators but better characterized as mesopredators and are prey for sperm whales among others. It would make sense for such a slow moving animal to develop defensive strategies such as jettisoning off one or more tentacles when bit by a predator, like this squid species does. Anecdotally I see this a lot when looking at interactions between large cephalopods and predators - remember some of the first video evidence of Architeuthis showed individuals missing one or more tentacles - it could be a very common tactic used by cephalopods to distract predators...


Should we be so surprised that a fish that is often compared to sharks does a shark like thing? That in the icy depths an exceptionally old, experienced toothfish had suffered enough from its cephalopod tyrants and took the fight to a colossal squid and decided that hey I am going to take some of your arms off today how do you like me now?

I have not yet mentioned that the name of the paper by Remeslo et al. is titled Alien Vs. Predator: Interactions between the colossal squid (Mesonychoteuthis hamiltoni) and the Antarctic toothfish (Dissostichus mawsoni) Journal of Natural History (2015). That is of course an awesome title and the allusion to color changing in the predator and cephalopods should be recognized. But in the cold Antarctic depths we best imagine this battle played out in super slow motion unlike the hyper speed assault of the fictionalized version. A gelatinous blob with a ridiculously slow metabolism begat by a much smaller fish that bleeds clear blood with only an incipiently faster pace of life. A slow motion clash of fin, tentacle, tooth and beak.

And an ecological association we are only beginning to get a handle on just as the cast of players in the Antarctic and sub-Antarctic oceans might be changing radically due to climate change.


Special thanks to Alexander Remeslov for his kind correspondence and generous sharing of imagery.

I dunno Duane, the sucker marks notwithstanding , the Tooth Fish head don't look too ugly to me. Sleeper Sharks have always had a place in my list of oceanic nightmare fuel, whether it be their deceptively sluggish gait, their abyssal domain , their zombie like appearance or their sheer size, these things never fail to fill me with a sense of awe and horror, now i have another reason to add to that list.

Curious how to get in touch with you about licensing a photo on your blog. Thank you. Always kind regards, Sandra -Please email me at Madsensandra@gmail.com