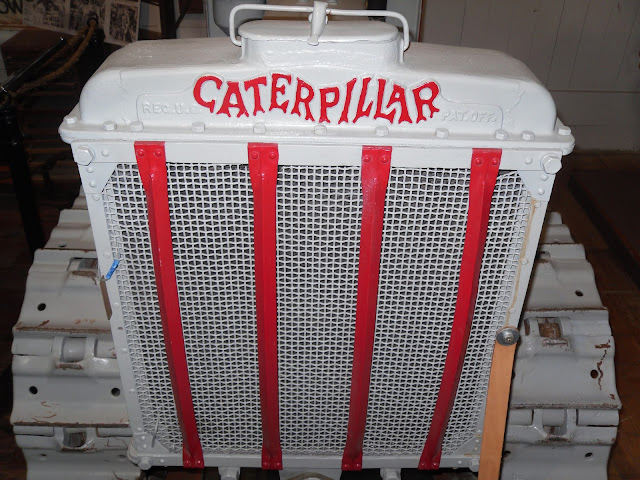 It might be a little bit embarrassing to admit but when I am gardening I do sometimes pretend I am a megaherbivore doing its thing to a landscape. Now I am not literally stomping and hollering about like a kid pretending to be a brachiosaur but trying to pay attention to the reactions of the plants, soil, and landscape to my actions over time. When I shear back our auracaria trees I pretend I am some hungry sauropod and then I watch how closely they grow back (not fast btw). When I mow the lawn I imagine a herd of grazing wildebeest mowing down an east African grassland. The grass clippings which I leave behind providing a good proxy for the dung a herd of grazing mammals might leave behind, further increasing the biological activity of the soil and hence the grass. I look at where seedling easily take hold and sprout, generally loose, tilled soil. And I pay attention to where seeds do not take hold, generally the most compacted soil, which also is generally where I walk. But what does take hold in these compacted areas? Our good ol' friend moss.

Any gardener worth his salt is familiar with the age old battle of moss versus grass. Although it may appear that the moss is aggressively making inroads against the grass and out-competing it in certain spots this observation is incorrect. What is more accurately descriptive of this interaction is that the grass, for a variety of reasons, will not grow in the spots ridden with moss anyways and the moss is simply opportunistically making a land-grab. And while pH, moisture, and shade play their role in giving moss the competitive advantage in these areas soil compaction is often to blame. Being exceptionally shallow rooted moss often times is the best colonizer in compacted areas. And being fairly large and flat footed the areas you often trod on a lawn have a tendency to become compacted and therefore moss dominated. Where compaction reigns, moss gains.

Perhaps a little history of tractors may prove useful in looking at the interaction of megaherbivores and soil. The first tractors were mammoth things. Some of the earliest models such as the Yuba pictured above weighed 5 to 10 tonnes and their weight was prohibitive for working directly on the field/orchard in growing areas due to compaction of the soil. However newer models such as the popular caterpillar

model were a much more modest weight (2 tonnes) and they spread this weight over a larger surface area. In this manner they were able to work directly on the field/orchard without undue compaction that could threaten the health of plants. Now it is not too much of a stretch to imagine tractors as analogues for the big mega-herbivore dinosaurs. And like dinosaurs tractors were able to successfully work around plants by spreading their weight over a large surface area.

That the feet of large animals affect the rhizosphere is evident to anyone who has spent appreciable time gardening as I pointed out in the first paragraph. But how large animal feet have made an impact (pardon the pun) on the rhizosphere in contemporary ecosystems and throughout the history of tetrapod evolution is woefully understudied. Generally speaking most studies on herbivore plant interactions focus on how the mouth interacts with the plant. Classic examples include mammalian grazers mowing down grass, frugivores spreading seeds in a diffuse coevolutionary handshake, sauropod browsing creating more robust conifer seed cones over time... But how the foot interacts with the rhizosphere- the most critical zone in plants- is generally ignored, but this is for shame because the roots are indeed the lifeblood of the plant. Many plants can be sheared to the ground as many trees can be cut down to a stump- but regenerate through latent underground buds, rhizoids, tubers, or in the case of trees stump sprouting/coppicing. But kill too much of the root through direct consumption, or by compaction which inhibits respiration, nutrient uptake, and water movement, and the chance of a plant coming through this root abuse are nil. And so consider a typical four legged large bodied herbivore- every time it takes a bite to eat, it still has four feet on the soil surface affecting the rhizosphere. And when our herbivore is walking between choice plants to forage it is again making many more footfalls on the rhizosphere than it is taking bites of plant matter. And with each footfall the animal is affecting the soil, maybe cutting into it or maybe compacting it, both of which have repercussions for rhizosphere health as well as seedling/spore germination. So not only are tetrapod footfalls understudied in comparison to herbivore foraging effects on plants- an argument can be made that foot/rhizosphere interactions are every bit as important, and possibly even more important, than direct plant foraging.

A comparison of the feet of the most dominant and successful mammalian herbivores- hoofed mammals- to the feet of large dinosaurs illustrates some important differences.

If you think about it the hoof of a horse is one of the weirdest and most derived structures in all tetrapods. Imagine you are walking around on the tips of your nails, excuse me just one nail- all other digits have been lost, and this is the foot of a horse. The other most common herbivores- deer, antelope, sheep, goats, buffalo- have a very similar design although not as distilled as the hoof of a horse. This structure puts all of the weight on a very small and sharp area. There is a component of compaction here but shearing forces are also at work with this style of foot. You can also stretch this observation to argue that hoofed feet, able to cut into and disturb the soil, prove adventitious to seed spreading plants which simultaneously spread and proliferated with hoofed mammals. 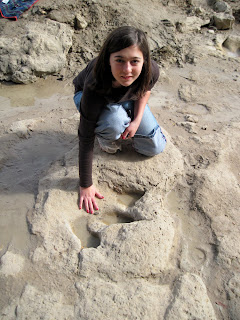 Now consider an ornithopod dinosaur, the style of foot is implied in the name Ornithopod which means "bird footed". What you have with ornithopods, and ornithischians in general including hadrosaurs, is structurally a very different thing than hoofed mammal feet. The weight is not on a single point but spread out- just like the caterpillar tractors we were talking about earlier- and this creates a footfall more about compaction and less about shearing forces. If you look at the feet of other dinos you see a similar pattern. The big padded feet of sauropods, ankylosaurs, and ceratopsids are a far cry from the sharp, pointy hooves of horses, buffalo, and giraffes. The long and short of it is that dino footfalls have a more compacting nature while hoofed mammal feet have a more shearing action to their footfalls. 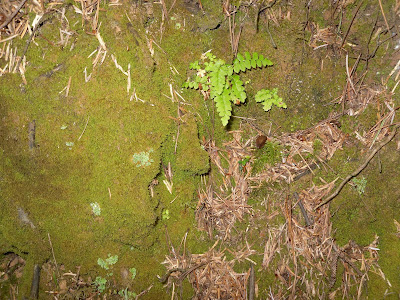 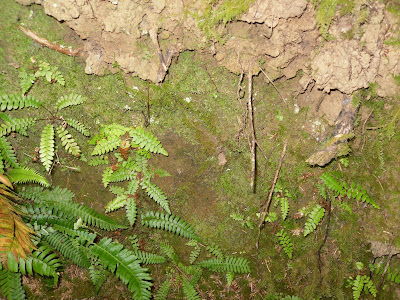 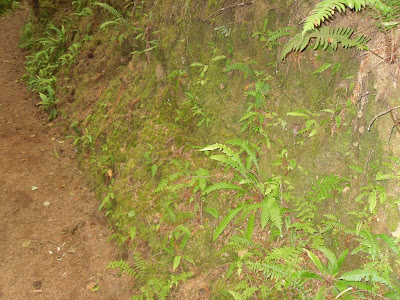 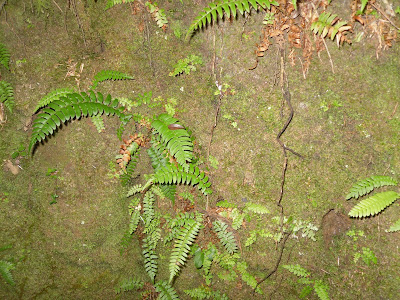 So what? Ferns and moss together big deal right? Earlier on Dino Turf I argues that a ground cover layer of various cryptogams- moss, lycopsids, spikemoss, soil-crusts- worked in tandem with ferns/ horsetails to provide the dominant groundcover in the Mesozoic.

It goes like this. In recently disturbed areas, especially dino compacted soils (remember moss can do well in compacted soils), moss would be one of the first plants to recolonize. Even in deserts areas we have moss and spikemoss that grow in these areas seasonally. This first layer of groundcover is critical because it provides an ideal foothold for other spore borne plants to get a foothold such as ferns and horsetail. Dry bare soil is not the ideal nursery ground for fern spore to take hold, moss can provide small little nooks and crevices where water can collect and assist in the unusual water mediated fern reproductive strategy. Once you have established ferns/ horsetails they can now spread through rhizoids, tubers, and other vegetative means. These plants now provide a sort of protective canopy for the groundhugging cryptogams below, establishing a shady little microclimate for them and assisting in their spread. This groundcover layer now forms a sort of buffer layer to the roots of the emergent ferns/horsetails protecting them from extremes of heat/cold/evaporation. We now have a classic feedback loop where the moss layer encourages the fern/horsetail layer which also through shading enhances the moss layer in turn. Occasional disturbances such as fire, dino trampling reset the whole system. Check out the pick below, also from Brookings, where you have moss, fern, and horsetail on an exposed slope. 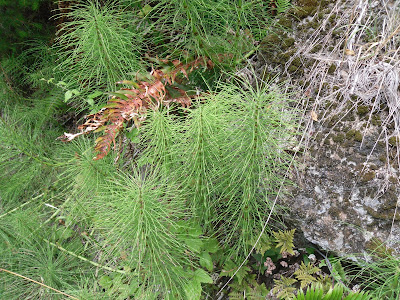 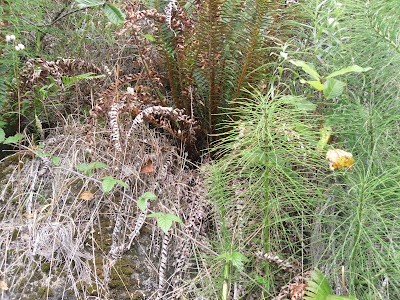 Moss, because it is small and seemingly insignificant, does not get the attention it deserves. But if you look at modern ecosystems it is the ubiquitous groundcover in pretty much all areas that grass does not grow today. Deep shady forests, arctic tundra, dry deserts, even Antarctica has moss. Spiky hoofed mammals and their favorite food grass has push backed on moss quite a bit- but it is easy to imagine how in a world without grass moss type plants would have a lot of ecological opportunity- perhaps even playing a critical role in dinosaur mediated habits.

And here are some more pictures from my trip to Brookings Oregon. Great place to look at plant interactions with loads of Mesozoic type stuff everywhere. 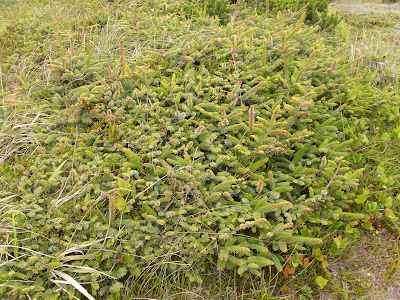 Some dwarfed conifer on a windswept ocean bluff. I think a type of fir. 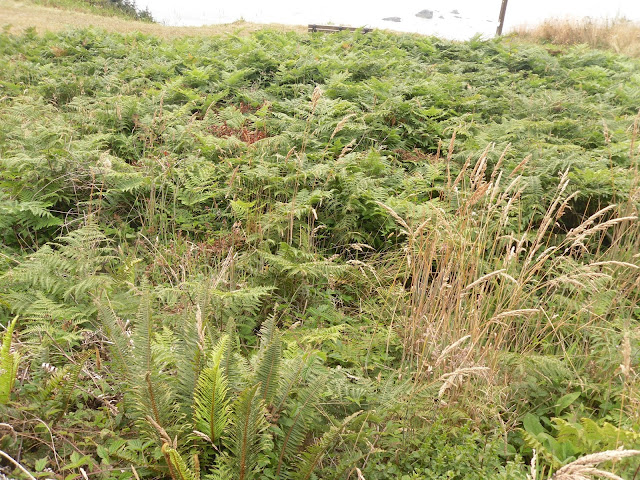 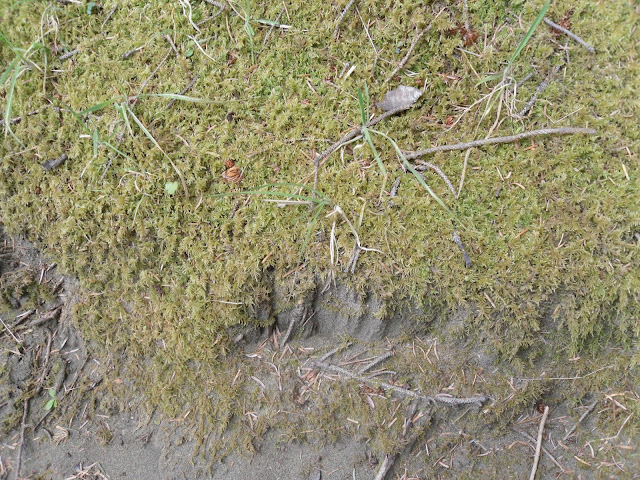 Moss was so aggressive here it was colonizing sandy terraces and stabilizing sandy hills. 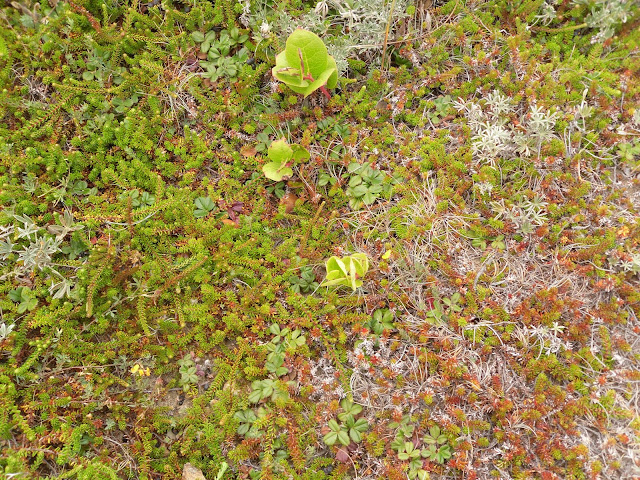 Wallaces Spike Moss, you know I love my spike moss. Here it was growing on a windswept ocean bluff. 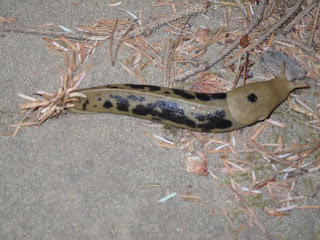 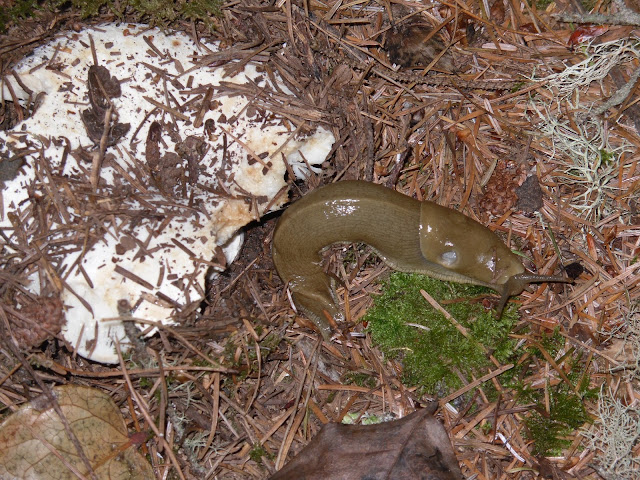 And the slugs here love to eat shrooms!!!!

Evolution by the Grass-Roots

Did Crust Kill the Dinosaurs

Great ideas! I hadn't thought of it this way. I'd suggest that this is another way that grazers and grasses coevolved.