* New data has come to light on ceratopsid biting mechanics. I no longer subscribe to the view I espouse here. Update 11/5/13

Available for free here on PLOSone is a new paper analyzing the ecomorphology of some herbivorous dinosaurs from Dinosaur Park, Alberta Canada dating to the Upper Campanian of the Cretaceous. The authors developed 5-6 distinct ecomorphs from the 12 herbivorous dinosaurs examined. They analyzed the skulls based on size, width, ventral deflection of the snout, distal extension of the tooth row, and depth of the mandible. The paper addresses the ongoing debate on how such large and diverse megaberbivores coexisted in such exceptional diversity on the relatively small island continent of Laramidia.

I have talked about Laramidia before here on Laramidia: The Great Dinosaur Species Pump. I discussed a paper suggesting transverse mountain building events- orogonies- as providing a geographic barrier promoting dino vicariance speciation events and ultimately great diversity. I also theorized in that post that nest site fidelity may have worked in coupling with mountain building to further promote dinosaur speciation.

Now keep in mind that the question of dino diversity on Laramidia, like many complex questions, is not necessarily an either/or one. That is, it is not necessarily a simple one answer question. Just because niche partitioning was occurring does not mean mountain building/isolation did not play a role and vice/versa. Never-the-less the paper does add another layer to the debate and I suggest you read it before you move forward reading this post as I do not want to write a simple summary but address some of the more pertinent points in the paper as they relate to my own opinions about dino faunas of Laramidia.

First of all, here is where I think the paper left me wanting more in several spots.

Where are all the small guys? Now I know people love big stuff and dinos were big stuff but the more we look at these faunas the more diversity of smallish dinosaurs we uncover. Dinosaur Provincial Park was no exception with lots of small to medium sized ornithomimids, pachycephalosaurids, oviraptors, various ornithopods, and probably some other stuff I am forgetting. How important were these guys ecologically? I don't know. Fossil bias likely skews the preserved remains in favor of large dinos like ceratopsids, ankylosaurids, and duck-bills- which happen to be what the study focuses on. Furthermore our friends the ankylosaurs are given the ecomorphological treatment like the ceratopsids and duck-bills but as the authors mention themselves they could not conduct much statistical work on ankylosaurs as the sample size was rare. There it is again, rare but ubiquitous ankylosaurs. Maybe ornithomimids were more important herbivores in DPP than ankylosaurids? Predation pressure and fossil bias likely account for larger species being preferentially preserved. Additionally, due to their R-strategy reproduction, the populations  was likely skewed towards smaller class sizes- but the paper does not address how these subadult/teenage/hatchling dinos acted.

I don't know maybe it was the dataset that they were forced to work with but any more complete approximations of this ecosystem include how smaller dinos/immatures fit into it.

Scant attention is given to the vegetative community. The authors briefly mention the paleo-flora but argue that much of the flora alive at DPP is also found today and their morphometric study is not invalidated by this fact. No argument from me on this one but I believe it is imperative that we perhaps acknowledge that the environment of DPP, a high-latitude subtropical biome, is one we have no modern proxy for and how herbivores exploited this environment will likely invoke animal ecologies we likewise have no modern proxy for. Did plant growth slow or just stop mid-winter with only 7-8 hours of day? Conversely during the summer there must have been a riot of growth...

Again, these are not so much criticisms of the paper- you can only do so much in one paper- but just some ways I think we can see and understand DPP in more resolution. I do applaud the work put in and it appears very solid in terms of showing how these various subfamilies partitioned the resources. But here I do see a little bit of problem in that the language and tone of the paper is couched in terms of "competition" i.e. how did the herbivores coexist? They minimized competition by eating differently on different plant types the paper suggests. But is their another way to look at how these herbivores coexisted?

Consider a beaver pond in modern day Alberta, Canada. You have a beaver which creates the habitat of the beaver pond and directly enhances it for other creatures. One such creature that directly benefits from the beaver pond is moose, attracted to the luxuriant growth and aquatic vegetation. Now the moose and beaver have significant dietary overlap, leaves/branches of cottonwood, poplar, and willow for example. There might be some truth in saying that they compete for this resource. But at the same time the moose disproportionately benefits from the actions of the beaver by the beavers' creation of ideal habitat providing a great example of commensalism. Where Beaver Lead, Moose Follow.

Imagine, if beaver and moose were extinct before paleontologists came about, the problems in elucidating this relationship between moose and beaver for a putative paleontologist. You keep finding this seeming cohabitation beween moose and beaver in the fossil deposits. One a short, stubby, squat rodent equipped with massive incisors and browsing dentition. The other a spindly legged quadrupedal browser. You might wonder how this little critter made its living...how could it get away from predators?....why those teeth?....it certainly could not reach very high into the vegetation. What about the moose? An upland browser maybe washed into wetland settings? Would you ever arrive at a strong seasonal aquatic habit for it? Did the two compete? partition resources? What problems might you encounter in getting to the relationship between moose and beaver? Would you ever?

Now let's get back to the question of Laramidian dinosaurs with the example of moose/beaver commensalism in mind. Currently much of the debate concerning Laramidian megaherbivores centers on niche partitioning i.e. how they minimized competitiion. But let's reframe the debate and allow for various levels of competition, niche partitioning, and commensalism all possibly taking place- maybe even concurrently.

In the paper the authors note that the morphometric breakdown suggests discrete herbivorous adaptations among the families and subfamilies. One of the more interesting aspects of the species breakdown is that the pattern of herbivore types represented at DPP tends to repeat over time remaining stable. That is these "chronofaunas" keep stable even as the individual species change. For example a fauna will likely contain maybe one nodosaur, one ankylosaur, a chasmosaurine, a centrosaurine, several  lambeosaurine, and maybe several hadrosaurine types. But you never see the fauna dominated by a single morpho-type; for example you never see five or six lambeosaurines but no chasmosaurine. That these distinct morpho-types keep repeating in a pattern is indeed, as the paper suggests, consistent with niche-partitioning; but let's examine this trend of "chronofaunas" not from a perspective dominated by competition, but one in which commensal relationships dominated.

Let's address the issue of megaherbivore diversity from the perspective of "keystone" species- species that have dramatic influence over the whole ecosystem. And the keystone species, I purport, in DPP park were the ceratopsids. A few posts ago in The Devil's Chewtoy I spelled out my view of ceratopsid paleo-ecology. I envision ceratopsids not as archosaurian rhinos/buffalo but as giant, terrestrial parrot/beavers. These guys, I suggest, were using those over-sized heads, parrot beaks, and stout builds to chew up and topple trees and then have their pickings
of the best browse. Seen in this light ceratopsids were not ungainly rhino-wannabes in an awkward foreleg half push up. Instead that unique stance, rostral beak, and robust build bespeak an exquisitely adapted tree toppler. Indeed the authors in the paper characterize ceratopsids as acting as browsers from their analysis but are perplexed that the scope of browse is limited to the first meter of vegetation. But if ceratopsids brought the browse down to their level the problem is solved. 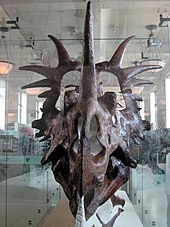 One of the more intriguing issues in dinosaur biogeography is the scarcity of ceratopsids in Asia despite it being connected to North America (with abundant ceratopsids). Could the prevailing arid conditions of Asia not have provided enough trees for ceratopsids? We don't see guys like Sinoceratops in China until things get wetter. Additionally although hadrosaurids seem to have penetrated into South America, ceratopsids were either absent or extremely scarce in colonizing South America. Could an equatorial arid belt prohibited their migration into the south? To add another layer to my argument remember there are no clear high browsers in DPP. No sauropods, not even any especially tall therizinosaurs or ornithomimids. Is it not a little weird that some of the best paleoart of DPP shows all these low slung herbivores walking underneath towering, unexploited trees? But tree toppling ceratopsids adequately fulfill that seeming ecological vacancy.

Seen in this light ceratopsids were the engineers of these ecosystems. They would have moved into forests and toppled trees. The effect would be to lower the browse level not only for ceratopsids but for any other dinos that wanted to partake; maybe bands of lambeosaurines followed along the ceratopsids waiting for a leafy dinner. Abundant root sprouting/coppicing would commence for redwoods and angiosperms providing abundant browse in reach of herbivores. Additionally this tree toppling would have created open areas with sun penetration that benefitted lower browsers and grazers like big wide mouthed ankylosaurs and hadrosaurids.  Remember those wood chomping hadrosaurs I talked about in Rot n' Roll in the Mesozoic Muck? Yeah tree toppling ceratopsids would have benefited them as well... Maybe ceratopsid tree cutting set a whole ecological cascade in motion of forest succession ultimately creating and enhancing habitat for a whole myriad of dinos. plants, and other critters? The point is you can imagine all kinds of unique ecological corollaries based off of ceratopsid tree toppling.

And if ceratopsids were the lumberjacks/forest clearers of Laramidia, ankylosaurs were the janitors.

As I talked about in Ankylosaurs Are Still Weird I believe these guys were up to eating all sorts of weird stuff. Not saying they did not eat stuff like ferns, fruits and stuff as preserved in the oolite of Minmi, but I believe the Mesozoic offered up ecological opportunities just not found today which these guys capitalized on. You have to imagine that these subtropical high latitude environments with abundant water were interesting places without exact analogue today. During those long, hot summer days plant growth was likely off the charts. And then during those winter months you have all those deciduous plants, leaf litter, dino dung, moisture- it must have just been rife with fungal growth. Ankylosaurs may have relished those fungal treats. Additionally stuff like dung, rotten dead stuff, insect hives, eggs,  detritus, tree sap, roots, fruits and bones were possibly delectable tid-bits for ankylosaurs. They were, in my view, like walking compost bins with their adept smell leading them to their next toxic meal eagerly slurped up with their robust tongues.  Ankylosaurs kept the flow of nutrients going hard and fast in these super-charged Laramidian ecosystems in my view.

Anyways, those are my thoughts on how some aspects of the DPP ecosystem functioned. I know it is not a typical color by the numbers approach and, as always, highly speculative but I do believe what I have portrayed is in the realm of possibilities and may offer insight into how to approach these ecosystems.