So I have some updated pics from my "Jurassic Burglar Alarm" pic I am working on. Although I consider my art a little rough around the edges I get a lot from drawing- it opens up parts of the brain and relaxes you in a way that other activities can not- and I will continue to draw in my less than precise self described "punk rock style" of quick and to the point. Besides my pic tells a story and I don't think its a bad one. 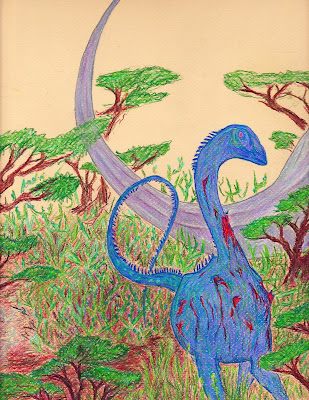 As you can see my baby blue bronto has recently suffered an attack of some sort and is obviously recently mauled. But who did the mauling? And whose big purple tail is that? Is that the tail of the attacker? 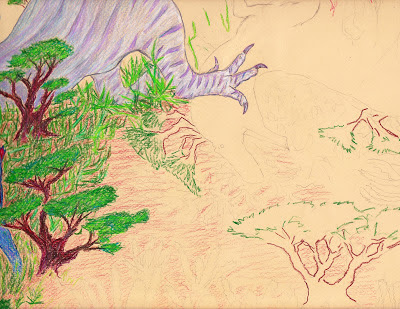 So that purple tail actually belongs to a pretty large theropod. If you can imagine the blue bronto being the size of a water buffalo this theropod is white rhino size. And it has some other theropod (still in sketched form) pinned down. Who is that? Its Allosaurus clearly getting the worst of it from the larger theropod- which is actually a Torvosaurus. And the poor Allo is being unceremoniously dispatched by the Torvo. 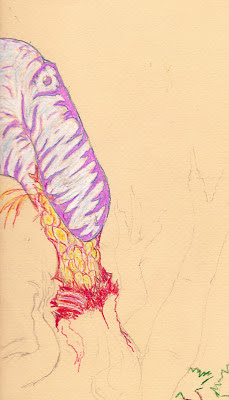 No those are not the Allos guts being pulled out- the Torvo has broken through the gastralia of the gravid Allo to target its still developing clutch of eggs. A choice yolky, fatty treat for the Torvo.

So what is going on here?

As I alluded to in "Jurassic Burglar Alarm" preview I took a lot of inspiration from the recent Discovery Channel special Looking for the Giant Squid. This doc provided the first film evidence of Architeuthis in its natural habitat. Although a variety of tactics were used to attempt to lure in the massive cephalopod, from sex hormones to bait, the tactic that proved most useful was spearheaded by Dr. Edie Wedder.

Wedder believed that in order to lure in the giant to camera range they must be as unobtrusive as possible. Simply put the lights, motors and vibrations from previous dives had kept the squid at bay. So she put an unmanned, battery operated remote submersible into the depths and then tested her "burglar alarm" hypothesis.

Wedder devised an e-jelly based on the predator response of the Atolla jellyfish, a midwater jelly found in oceans around the world. When attacked Atolla wyvellei emits a series of pulses to lure in a larger predator- the idea being that the larger predator will take care of whatever is attacking the jelly.

And it worked, vindicating Dr. Wedders hypothesis and providing the world with the first video of Architeuthis in its natural habitat.

As for the show itself, I felt it was pretty well done and what I thought was almost equally interesting as the giant quid footage was the abundance, diversity and startling abundance of other fairly large cephalopods in the habitat of the giant squid.

The dives caught footage of the 13' seven armed octopus, Haliphron atlanticus, second largest octopus species; the robust and speedy diamondback squid, Thysanoteuthis rhombus. which often served as bait during the show; and, most impressive, Taningia danae, which itself can grow to several hundred lbs and when was at first mistaken for the giant squid when filmed in the documentary.

Clearly Architeuthis is but one link in a rather diverse and spectacular guild of deep sea squid. And it goes without saying that intraguild predation amongst and between these guys must be a big part of their lifestyle. 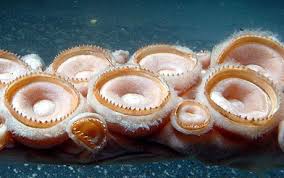 And, if you have followed me so far, hopefully you see where I am going with this. Readers of this blog know that I believe intraguild and even intraspecies theropod predation was rampant in the Mesozoic. Like the midwater realm, the Morrison formation had a bevy of diverse theropods and in this pic I am depicting a possible intraguild predatory event between Torvosaurus and Allosaurus.

As evinced by the mauling the baby bronto took it was attacked by the Allosaurus. However the Allo is not a particularly clean killer like felids, but it has a quick and weak bite. If the bronto can sustain the initial onslaught it has an ace in the whole. The bronto bellows, whips it tails and rattles its dorsal spines. The ruckus it raises is not to scare off the Allo- but attract a Torvo. You see, Torvo actually relishes the flesh of other theropods and specializes in killing them. Allos are the most common theropod because of their flexible diet and high fecundity. Torvo knows this from experience and actively targets gravid remale Allos. The bronto escapes and survives its wounds as the Torvo much prefers theropod fodder.

Much to come later... 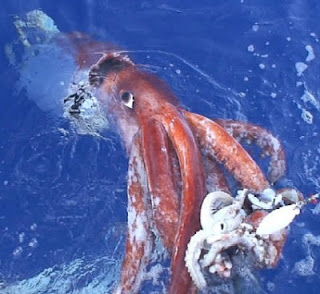 The Curious Case of the Cannibal Squid

By sheer coincidence it appears, Allosaurus and Torvosaurus were also covered today at Laelaps.

I saw that too- funny.