Of Notches, Tarchia and Sloth Bears

* Seeing as this is one of my older but also more popular posts I do want to caution that I myself do not particularly subscribe to the idea of insectivorous ankylosaurs strongly anymore. 11/5/13

*Update 7/27/15 Maybe my first intuition was correct after all? Excuse the taxonomic confusion ankylosaurs are a bit of a mess. http://phenomena.nationalgeographic.com/2015/07/27/ankylosaurs-slurped-food-with-powerful-tongues/

If you are not too familiar with the sloth bear, Melursus ursinus, that's understandable- its generally overshadowed by its more typically ursine relatives such as the black, grizzly, or polar bear. Even in its home range of the Indian subcontinent (including island Sri Lanka) more attention is given to the other charismatic mega-fauna like the tiger and Indian elephant. This is for shame because the sloth bear is without a doubt one of the weirdest bears and most enigmatic mammals around.

Notice that interesting U shaped white marking, that is a display patch also shared by the Malayan sun bear and Asiatic black bear. It is thought that distinctive patch evolved in all three of these Asian bears as threat display against the large felid predators that occasionally prey on these bears- leopards and especially tigers. When threatened the sloth bear will stand its ground and fight. This tactic sometimes works, such as the mother sloth bear pictured below who defended her cubs  (clinging onto her back btw) against TWO tigers, and sometimes does not. 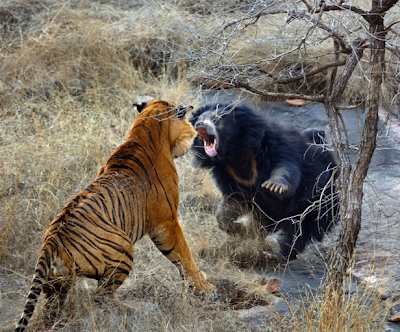 The sloth bear also has quite a reputation for attacks on humans where its teeth and especially those claws are put to devastating use. Theodore Roosevelt famously considered the sloth bear more dangerous than the North American black bear. One specimen, known as the Sloth bear of Mysore, was single-handedly responsible for the deaths of 12 people and the mutilation of 2 dozen others before being shot by Kenneth Anderson. All in all though human conflict with the sloth bear has proven to be more about conflict over territory and food resources than about the bear actually viewing humans as prey.

As interesting as the sloth bears' penchant for brawls with humans and other wildlife is, its most interesting feature is its diet. Like other bears it will eat fruit, vegetation, carrion and just about anything edible but its chief food is social insects such as termites, ants, wasps, and bees. In this regard it shows remarkable convergence with other insect specialist such as anteaters. The sloth bears' insect diet is reflected in several features of its anatomy. Most obviously you have that shaggy mane-like coat which, in a great example of a feature serving several purposes, both adds size and bluff to the animal and inhibits insect bites/stings. Now lets take a closer look at this guy's maw.

It's got quite the bulbous nose to sniff out insects and lips that would make Jagger totally jelly. In fact the lower lip can curl back over the nose and cover it completely! Couple with a strong tongue and long broad palate and you have the ultimate insect hoover vacuum cleaner. In fact when you look at the skull of the sloth bear you can see that the two upper incisors are reduced or absent (in fact the molars and premolars are fairly reduced as well) to increase the suction efficiency. Evidently the sucking/schlurping sounds they can produce while feeding this way on insects can be heard over 100 meters away.


And now for something completely different....


Above is the skull of Tarchia kielanae, a quite large ankylosaurid from the Barun Goyot Formation of Mongolia representing late Cretaceous times. So, what gives- why the dino? Look carefully at tarchia's skull, then again at the sloth bear skull, then again at tarchy...  Do you see it yet?

Tarchia and the sloth bear are brothers in notch...they both share a frontal notch! In the bear it is formed by missing upper incisors, in tarchy the notch is formed quite obviously on the upper beak. As important, you should notice that the lower beak is beveled downwards so that when the jaw is closed perfect occlusion is not achieved and something could be there. A monstrous insect schlurping tongue was there.


Tarchia lived in a semi-arid to arid environment, complete with sand dunes. If all ankylosaurids were strict herbivores we should expect to see more robust dentition in those that lived in xeric habitats to handle the coarser vegetation.  But all ankylosaurids, regardless of habitat, show fairly weak dentition, certainly not as capable as hadrosaurids and ceratopsids. The counter argument is that they let their guts do the work. But in that case why evolve the robust tongue musculature at all? Why such emphasis on smell if all you are eating is plants? Nature does not waste.

I am not the first to suggest that some ankylosaurids may have had an insect component to their diet. In fact I temper my argument by stating that plants are still the mainstay of the diet for most ankyloaurids. Even for Tarchia gigantea I believe plants would have formed a significant part of their diet, especially when fully grown at several tonnes. Keep in mind that as dinosaurs grew up they acted as essentially different ecological species depending on what growth stage they were in. Insects were probably increasingly less important the larger tarchia got with an increasing emphasis on vegetative resources with age and size.

But look at this skull of Euoplocephalus-


For me this is what a herbivorous ankylosaur skull is all about. You got a big wide beak for biting off huge swaths of vegetation indiscriminately.


In closely related species very minor anatomical differences can account for huge ecological/behavioral differences. Imagine if all bears were extinct. Based on their skulls would we really be able to figure out that the sloth bear was largely insectivorous? Or just assume it was a typical omnivore like most bears?