Time for nice, happy upbeat post that is going to reassure you that everything is going to be all right for us here on little ol' planet earth - NOT!!! Heed the dire proclamations sallying forth from scientists and,  even religious leaders, who have their ear to the ground concerning imminent systems collapse of both natural and artificial systems on earth. As a man wiser tham me once said: "history does not repeat itself, but it certainly rhymes."

The impetus for this post is a paper recently published in the Proceedings of the National Academy of Sciences (PNAS) Extreme Ecosystem Instability Suppressed Tropical Dinosaur Dominance Whiteside et. al. 2015. Popular write up here with depressing comments from climate change denier nutters.

The central question at hand and which guided this study is why do low latitude late Triassic formations   lack herbivorous dinosaurs while higher latitude formations document them? 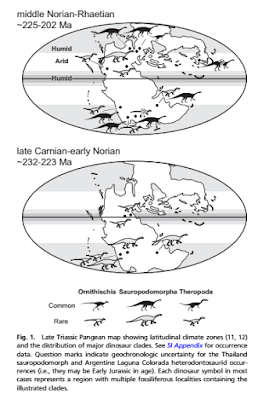 What they found of is nothing short of a violently oscillating ecosystem that, they suggest, was incapable of supporting large bodied, fast growing, high metabolic dinosaur herbivores (a tenable assumption that they make regarding high metabolism). Instead a paucity of relatively small bodied theropods coexisted with a dominant fauna of pseudosuchian archosauriformes or as I used to hear them more often referred to as - thecodonts. You know your phytosaurs, rynchosaurs, aetosaurs, rauisuchians and other quasi croc-like beasties of lore which the authors assume a deliberately more slow paced metabolism (and therefore better able to endure unstable/extreme environments). 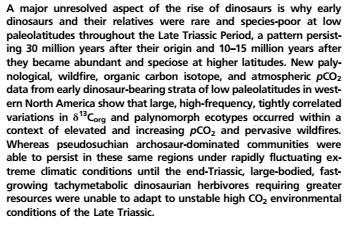 A decidedly harsh world with CO2 levels three to four times above modern levels. From the paper:
"One of the major predictions of models of elevated atmospheric CO2 levels is the increased frequency and magnitude of events comprising very high temperatures, an enhanced hydrological cycle, and increased precipitation extremes" and such "climate extremes might be expected to profoundly influence biogeographic patterns".

In a world already likely dominated by world wide mega-monsoon the vicissitudes of low latitude Triassic climatic conditions created a tinder box condition that may have ultimately proven incapable of supporting abundant, tachymetabolic large herbivores. In a generally semiarid climate intense bouts of rain - likely leading to extreme flooding and weathering - may have spurred on abundant plant growth. But this set up a surplus of material that, when the intense heat coupled with crippling drought arrived, created a perfect set up for intense and wide ranging fires which the authors found abundant evidence for in the form of preserved charcoal. To add in my own personal 2 cents if we assume that weather patterns were likely cyclical such environments may have seen years, decades, or even centuries of slightly more humid conditions (which is why there was big trees preserved at the petrified forest) but which were likewise countered by equally long periods of drought conditions. Such conditions, the authors maintain, would have proven too unstable and inconsistent to allow populations of large herbivorous dinosaurs.

Lead author Jessica Whiteside: "Our findings demonstrate that the tropical climate swung wildly with extremes of drought and intense heat," and that the intense wildfires "swept the landscape," which constantly "reshaped the vegetation available".

Now the situation in the Chinle makes a little bit more sense to me with a fauna largely dominated by archosaurs with a smattering of small predatory dinosaurs. What I personally am intrigued by is the dominance of phytosaurs - water loving crocodile mimics - in the drought prone Chinle. But hey, you can still have large river systems in arid continents. And one can imagine that when it poured it really poured on Pangea. And with the continents still amassed in large blocks when the interior of these large land masses got inundated with large monsoonal rains and if we presume large swaths devoid of vegetation or fire decimated then that rain is going to create torrential rivers when they do run.

It does beg the question in my mind - and it is a question I hope to revisit in future posts - what sort of coping mechanisms did phytosaurs and other Triassic archosaurs have to deal with such climatic oscillations. If their water supply dried out could they aestivate for long periods of time? Maybe even years buried in drying mud with only that nostril opening on the top of the skull sticking out to breathe? What about the giant amphibious temnospondyls?

Now you can take what you want from this study. It would be remiss of me not to mention the obvious parallels in the situation faced by Triassic dinosaurs with the situation faced by an extant bipedal, dominant, high energy demanding hominid living in the tropics in a regime of increased climatic, ecological, and political systems collapse. 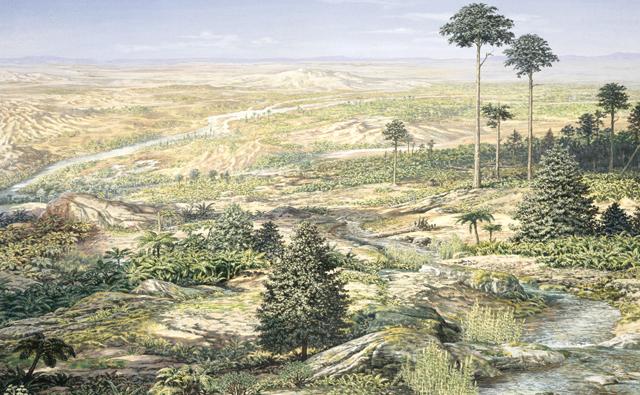 * Humble boast time, just broke 300,000 page views. I have a lot more stuff to post on in the nearish future and am pleased with many requesting/asking about if I will cover certain topics. Unfortunately due to this thing called life it will be a little quiet around here in the next month - I will be doing field work on beavers in Monterey county on the Arroyo Seco creek. If you don't know already beaver in California is a topic of intense interest to me which I discuss on my other blog southlandbeaver.blogspot Anyways if I was getting paid to write this blog I would have a lot more time to devote to it and would love to do it full time. But you know the story money is allergic to the topic of paleontology - unless you create a fictionalized monster movie full of cliches then it falls like mana from the sky.

Cheers and don't worry I have more plesiosaur machinations, dinosaur ecology, and Spino stuff planned but don't be surprised if it takes me until August!!