As some of my readers know I maintain a blog about both paleontology (antediluviansalad.blogspot) and beavers (southlandbeaver.blogspot). This post gives me a chance to actually merge the two blogs a bit!!

Take a second to watch the video I posted above. It is an exquisitely preserved synchotron rendered 3-D preservation of two Triassic animals; a stem amphibian Broomistega; and a stem mammal therapsid Thrinaxodon. The most parsimonious interpretation that the authors of the paper in question (link Fernandez V, Abdala F, Carlson KJ, Cook DC, Rubidge BS, Yates A, et al. (2013) Synchrotron Reveals Early Triassic Odd Couple: Injured Amphibian and Aestivating Therapsid Share Burrow. PLoS ONE 8(6): e64978. doi:10.1371/journal.pone.0064978) come to is that the two organisms coexisted in a burrow to survive a harrowing drought. Such a tactic is widespread in organisms that must persist through both seasonally cold and/or hot/dry conditions. Metabolism can be slowed a bit and even enter a state of torpor, or more appropriately termed in the dry season aestivation - which is pretty much the equivalent of winter hibernation. Now trying to parcel out where the distinction lies between rest, sleep, torpor, hibernation, aestivation is a hard nut to crack. Truth be told all these phases are probably best understood on a continuum from rest < sleep  < torpor < hibernation/aestivation <  dormancy.

Now hopefully the connection does not go over your head. As a putative "mammal ancestor" modern mammals share this genetic legacy of "torpor" which is still often used in many modern mammals - even primates - and which may have even allowed mammals to survive the Cretaceous mass extinction while non-avian dinosaurs did not.

Several years ago when I first started to get interested in beaver in California and other arid places one of my chief stumbling blocks was trying to grapple with the idea of putting such a water dependent critter into a habitat where water has a very ephemeral presence on the landscape. This was of course before I got into contact with Rick Lanman, Heidi Perryman and other beaver notaries and discovered that beaver not only can live in such areas but are doing so right now in places such as the Mojave River in San Bernardino county socal (here and here), Santa Margarita River in Orange/San Diego counties (here), and various river systems throughout Arizona/Nevada/Utah/and New Mexico.

Long story short even in the best of years the river runs mainly dry during several months of the year and during drought times (as we are in now) the river might be mainly dry from May to late August/September (if Cachuma does a late season water release for downstream senior water rights entitled farmers). We are, at a minimum, looking at 4-5 months of dry river.

How do beaver survive in conditions waffling between this, 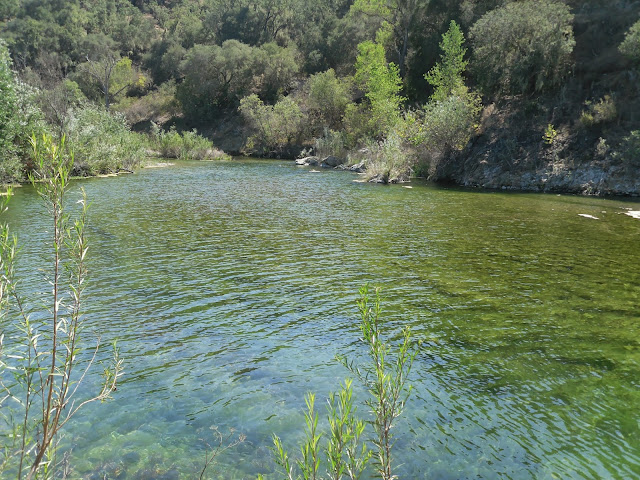 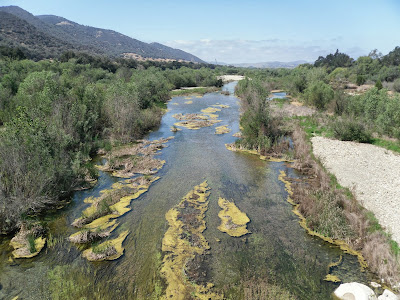 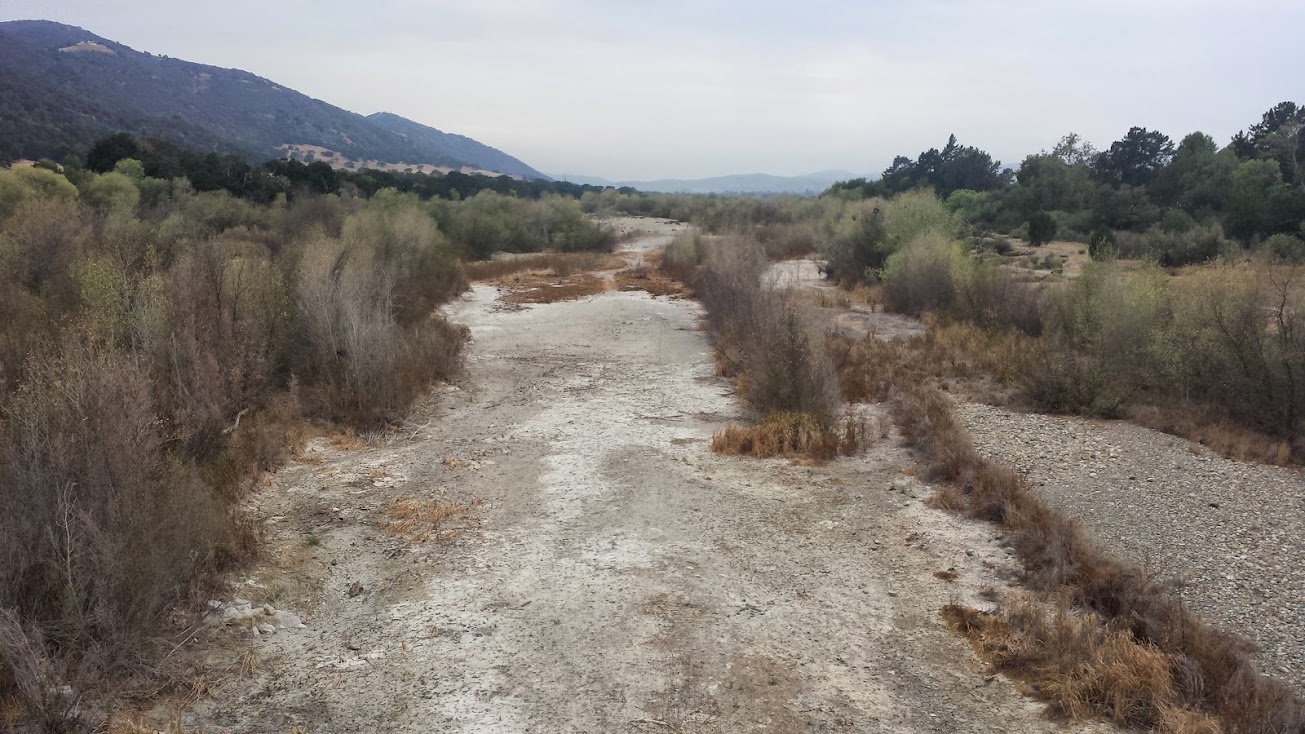 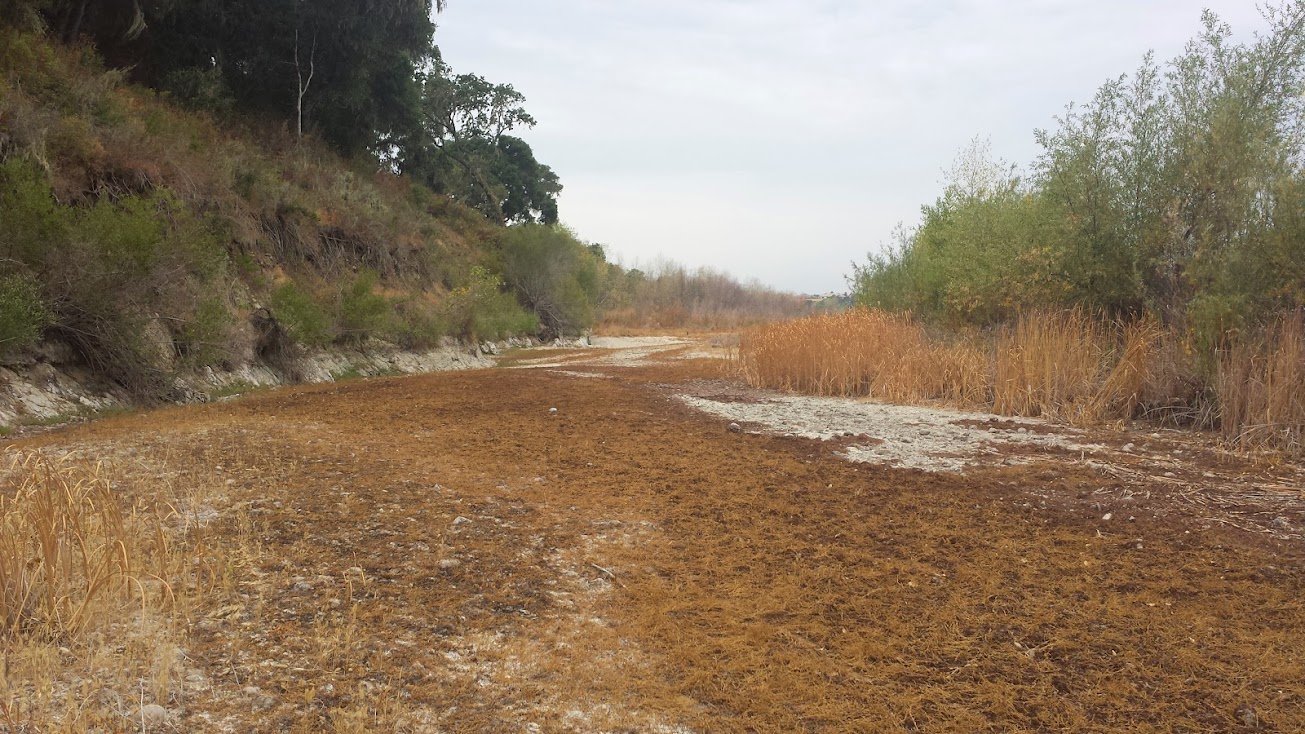 Now I have had a lot of pet hypotheses that I have been spinning around to explain this anachronism; Maybe beavers migrate downstream or upstream to areas of permanent discharge from wastewater treatment plants downstream or mandatory steelhead discharges from Cachuma upsteam; Maybe beaver are not as territorial here and share these resources in drought times; Maybe they relocate to the several golf ponds on surrounding golf courses.

But all of these hypotheses have their problems. Beaver are known to be terrritorial. Golf ponds do not line the whole river. And even if they did relocate up/downsteam that is still a trek of several dozens of kilometers for the beaver in the center of river course. And then this trek has to be done with kits in tow because kits stay with their parents for several years. This would be a very hazardous risk due to the abundant predators of the river: there are for sure bobcats, coyotes, and cougar - probably black bear too. I have seen predator track/activity such as this gnarled mule deer spine in the river bed.

I now think all those ideas are too flawed and what makes most sense to me is this: beaver along the Santa Ynez - and probably most arid condition beaver populations - hunker down in their bank burrows and go into a bit of torpor. They probably don't aestivate to the true definition of the word which is basically a summer version of hibernation - and we know that beaver do not hibernate.

Probably the best summary of known beaver "thermoregulatory" tactics is the one on the USDA page on beaver (Baker & Hill 2003 pdf link): 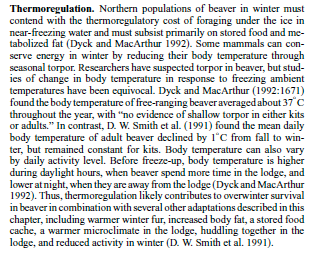 In a sense arid beaver simply "flip the script" in the parlance of the time and do what beaver do in winter in high latitude/frost prone areas of the range except that they do it in the summer as opposed to the winter. As most beaver in arid areas dig bank burrows this makes for more of cool temperature thermal refuge to inhibit water loss. Note that lodges - made of wood usually - would still swelter in the sun but several feet underground is a much cooler refuge. If beaver can position their burrow next to a small pool of water - either dug into the substrate or provided for by human activities - this provides a pool for defecation and drinking (eww I know both in the same pool). And if the the beaver can stockpile a food source or be close enough to find some forage this will provide the sustenance. But all in all I think beaver strategy is to hunker down, eat very little, drink very little, survive on fat, and most of all just stay out of sight as much as possible to avoid predator attention. A waiting game for the water which I fully think beaver are capable of.

And I have some photographs/videos to embellish my case: Now this fetid pool was the last bit of water in an area usually brimming with beaver activity. If you look closely you can make out two probable bank burrows. You will also notice several logs/branches on the ground. The outer bark is chewed off and note that the tree above - which more or denotes how high the water would usually be here - has its outer bark chewed off. Again I don't think beaver eat very much in this period - probably only enough to keep their intestinal biome optimized - but live off fat stored in their body and especially their tail.

I believe the depth of this pool is maintained by the beavers themselves to serve as a water reserve during the drought. This area of the river is full of rocks and since this pool occurs on a very rocky/cobbly part of the river these beaver are actively moving the rocks out of this deep part to dam up other parts. It should also not go unnoticed that this deepening of the channel - some claim beaver do the opposite but I disagree here - would serve as a nice cold water refuge for salmonids in years where drought was not so intense. Unfortunately non-native bullfrog are fully established in this stretch of the river and that is all I saw in this pool were goobly-gobbly looking bullfrog tadpoles.


Above is a video I shot showing this same area in April of that same year showing this pool in higher water times when I already suspected the usage here. You will note the two leaning trees that you can see in the pic above. I sound a little wheezy because at the time I was suffering a bit of iron deficiency.

And some beaver burrows upriver - remember this is in April of a drought year - so when I went back this area was completely dried up as you can see in the 2nd dry season pic above.


And then there was the documentation on the San Pedro River of Arizona of beaver, bank burrow, and small dug out pool that I covered before here. 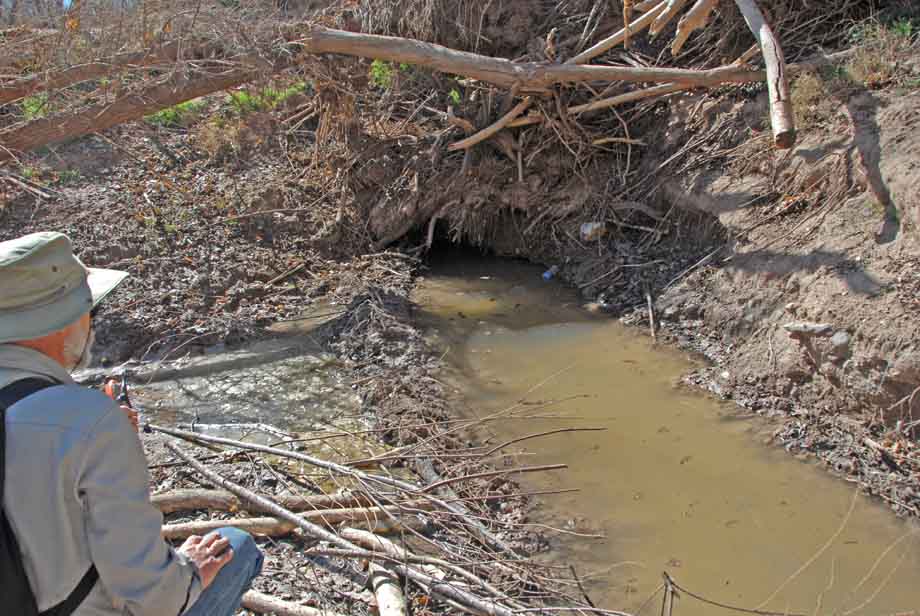 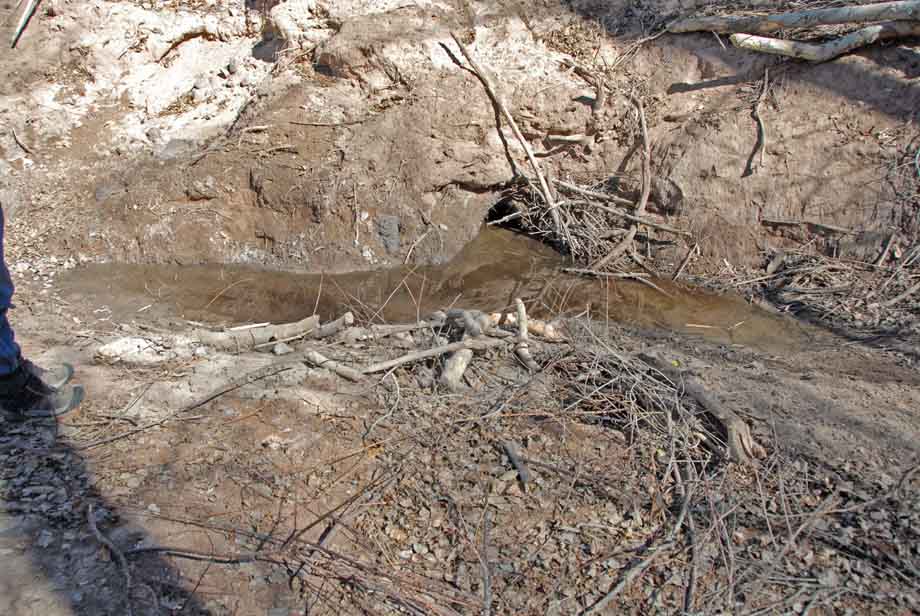 And astute beaver readers can probably recall a none too dissimilar situation of a beaver bunkering down on the Guadalupe River of Santa Clara county in drought conditions surviving off of a leaky culvert which I read about on Heidi Perryman's Martinez Beavers blog.

So in conclusion I doubt arid adapted beaver aestivate in the truest sense of the word but by just slowing things down a bit, bunkering down in a cool burrow, and sequestering away a source of water and just enough food beaver can find a way to squeeze through dry spells. Again, as discussed in the paleo paper on stem amphibians/mammals in arid climes this adaptation need not necessitate a strong drop in metabolism in line with true aestivation but it can significantly aide in resource poor/hot environments. And this is not a radical new adaptation for this species - it is simply the inverse of what northern/cold climate beaver do. Instead of buckling down for a couple months in the winter time arid adapted beaver adopt this behavior in the summer.

and nile crocodiles digging into and surviving in caves dug into river banks to survive drought in Africa just because....