Following on the heels of my Spinosaurus post I have been thinking about the aquatic/amphibious thing a lot lately and looking at the various levels of engagement in either realm animals partake in and have come to the conclusion that, at least for a terrestrial limbed tetrapod, being equally competent in the land and water at a high level is pretty darn hard to do if not impossible. (In the title I used the word switchitter to refer primarily to baseball players that are equally competent as hitters with both arms leading in case you miss the translation)

As a qualifier I stated this animal has to have limbs as numerous snakes are great in both realms - what comes to mind are garter snakes. I also stated that the animal has to be terrestrial i.e. not a bird as the dipper bird makes for a good case of being equally competent in both realms.

I should also qualify my statement by clarifying what I mean when I say "equally competent". I would consider a predator that can both run down prey and swim down prey at high levels "equally competent".  Not just any prey though - this animals must outpace the fastest prey items in both respective realms. Or a prey species that could elude the fastest predators in either realm. Such an animal would be able to approach the cursorial capacity of canids or felids on land and in the water be on par with the fastest scromboids and dolphins.

For sure there are plenty of animals that hunt down and kill prey in both realms - bears, lots of mustelids, monitors, crocs, frogs - but when you really look at these animals they generally are geared primarily to one environment or the other. And in many cases they are utilizing stealth or elements of topography to gain an advantage. Remember I am looking for that animal that can capture - not by stealth but by speed - the quickest and most elusive prey in either environment with equal ease and efficiency.

I am starting to think there is very good reason such an animal does not exist nor could it ever.

The reason being that aquatic versus terrestrial movement asks the limbs to do very different things. Aquatic propulsion will tend to select for shorter and stouter limbs. Shorter and stouter limbs, being closer to the body, will create less drag than longer limbs during the recovery stroke. So if speed is something of importance in amphibious tetrapods shorter and stouter limbs will be selected for. This is seen very well in skeletons of otters. In addition a long torso works a bit like a hull of a boat to help cut through and displace water. Just look at the unique proportions of Michael Phelps - long arms and torso, but relatively short (read powerful) legs and flexible flipper like feet.

Now contrast this with what it takes to be an excellent cursor ; long legs, especially the lower leg elements; a deep thoracic cavity to house large heart and lungs; and compact torso for quick maneuvering. Seen against what is called for to be an efficient amphibious tetrapod it quickly becomes apparent that the two forms of locomotion are diametrically opposed. And also why Phelps, although a world class swimmer, would make a relatively poor runner. Compare and contrast the dimensions of Phelps with the ideal body dimensions of a runner and you will see that humans mirror the pattern seen in animals. 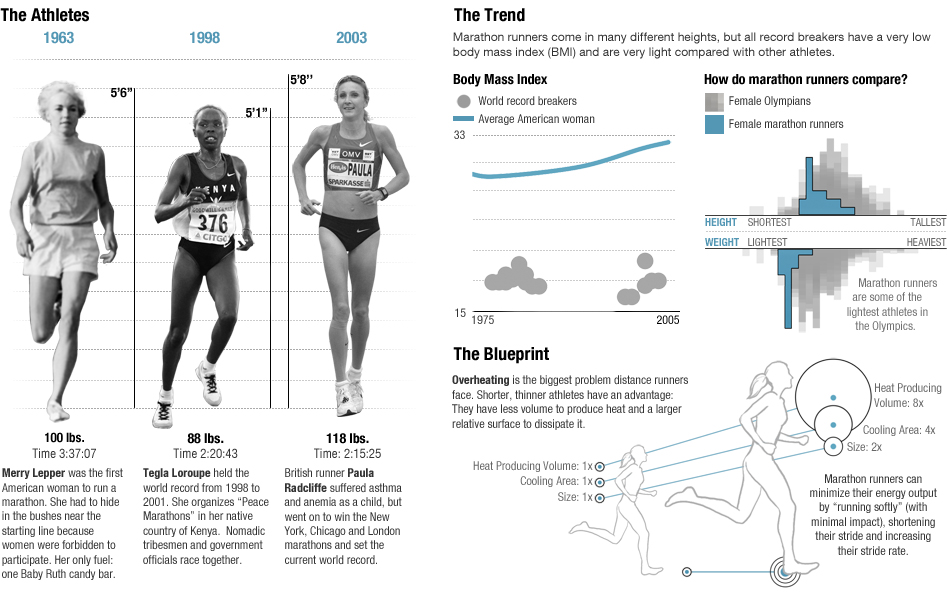 So although we have lots of examples of animals that dominate the aquatic and terrestrial realm in fiction - for example Dinocroc, Godzilla, Cloverfield Monster, Beast From 20,000 Fathoms, and the semi-mythologized JP 3 Spinosaurus - being equally proficient at a high level in both realms I don't see happening for a tetrapod.

So, what would you consider a Hippo, then? Would you see it more as a land-based creature or a water-based creature? Or should they even count considering they're mostly herbivorous?