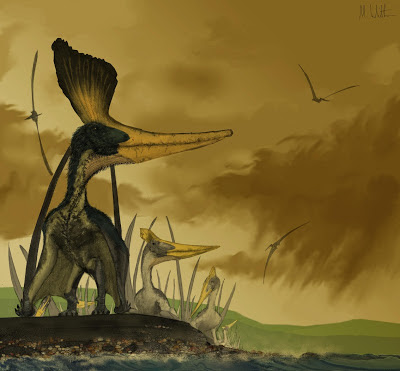 Although not exactly news to many people who follow the latest developments in pterosaurology, it is no overstatement to characterize pterosaur studies as going through a renaissance in the last 10 years or so. We now have re-thought pterosaurs not as "deranged seagulls" but instead many were seemingly highly terrestrial, some were arboreal, and a few may have actually been vegetarians or at least omnivorous. Pterosaur launching strategy has been liberated from downed hang-gliders at the mercy of a narrow range of wind conditions to "pole-vaulting" volant flight extremists, able to launch rapidly from many mediums, including water. We now have pterosaur eggs and hatchlings, the remains of which suggest highly precocial young, affectionately dubbed "flapplings", possibly able to fly away hours or even minutes after hatching.

And figuring prominently in this emerging view of pterosaurs is British researcher/illustrator/writer/blogger of all things pterosaurian (and more) Mark Witton. And in his new book simply titled Pterosaurs Mark has succinctly codified much of this new thought and research.

Now, I am a little late to the game on this one, as there are plenty of reviews already out there on this volume- but I'm gonna put my two cents in on this one anyway.

First and foremost is Mark's writing style- even above the illustrations I think his text steals the show in this book. Mark has a very light, breezy style to his writing. It is the type of writing that really draws you in and before you realize it... jeez I actually learned some stuff there without really trying to hard myself. And this is a great style for a book that does go into some very terse, academic stuff. But, again, the chapters on anatomy and such are made very approachable even for those with just a base knowledge of anatomical terms. My favorite example is where Mark delves into the still fuzzy issue of bone pneumatization- literally hollowing out of the bones. While most fully developed in birds and pterosaurs, Mark points out it is also widespread in sauropods- but strangely absent in bats. So the link between pneumatization and flying is not as strong as you might suspect. And then Mark really makes me think about pneumatization in a new way. He points out that animals of the same size, with pneumatic bone or without, have roughly the same bone mass. But animals with pneumatic bone, such as birds, pterosaurs, and sauropods, also have air sacs which "invade" the bone with pneumatic diverticula and the bone is redeposited towards the perimeter of the bone. In this way, Mark says, bone is inflated until it reaches a mechanical limit. The working analogy Mark uses is between an inflated balloon and an uninflated baloon. Again kudos to Mark, he really made me think about bone pneumatization in a new way and he did it as simply and elegantly as possible. Cool.

Being as this is a book about pterosaurs Mark does go in-depth concerning pterosaur flight mechanics. I don't really want to talk to much here about flight as it has been known for quite some time that pterosaurs were capable fliers, but what is still rather new to many is how they got in the air. The current dominant thought, and the one favored in this book, is a quadrupedal launch followed by a forelimb only "pole vault" into the air.

Given the tremendous strain and pressure on the forelimb, wrist, and hand in this launch it should come as no surprise that a number of pterosaur remains show evidence of arthritis in these very regions, Mark points out. 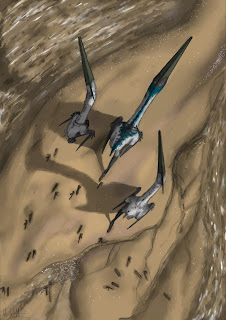 Pterosaurs out of the air is another issue entirely, one in which Mark does delve deeply. And this is fitting as Mark's work has figured prominently in our understanding of pterosaur locomotion on the ground, most notably the striding nightmarish azdharchids. But Mark also took one of our most beloved pterosaurs of all time Dimorphodon out of the air and into the trees as a kick ass arboreal hunter. Nope it was not a demonized puffin but in fact likely a reluctant flyer.

What's interesting to me is that Dimorphodon and its ilk were of early/mid Jurassic age. Why did pterosaurs not maintain this niche of arboreal predator? Did emerging maniraptorian dinosaurs with arboreal capabilities supplant them? Emerging proto-birds?

The second half of this book is somewhat of a who's who of pterosaur families and species through time. We see the remarkable diversity of species and families through the Mesozoic but I am left wondering...

Pterosaurs show so much ecological diversity and capability to exploit a wide range of niches over the Mesozoic- but they also seem to exhibit a conservative adaptive radiation at any given moment in their history. As Mark points out several times in his book our knowledge of pterosaurs is limited by the extent of certain pterosaur fossil bearing sites, Lagerstaten, where their bones are preserved abundantly. Tomorrow a site may be found that significantly adds to our understanding of pterosaur diversity. But elsewhere Mark points out we do likely know of all the major families of pterosaurs... again questions arise in my mind. Why was the later part of the Mesozoic dominated by large terrestrial azdharchids with little to no evidence of small types? If isiodactylids were scavengers like vultures why were they so limited in time and scope when large dino bodies were found through out the Mesozoic? Why, with the exception of anuragonathids, did pterosaurs not radiate into abundant small insectivorous forms comparable to modern bats/passerine birds in terms of abundance/diversity? We only have four anuragonathid pterosaurs for the whole of the Mesozoic?

But I guess these questions are arriving at the edge of what is known and hint at what future studies may answer. And it is always a good thing when a comprehensive book like this one gets you to ask these questions. One thing is for certain if you were a fence sitter and debating if this book is worth it- it is probably the only pterosaur book you will need for the next 20-30 years. 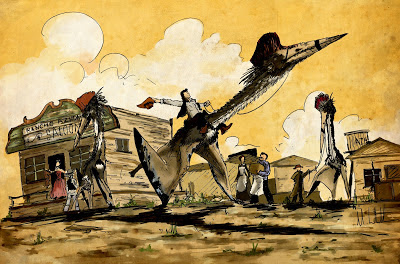