Brazilian Death Valley in the Cretaceous 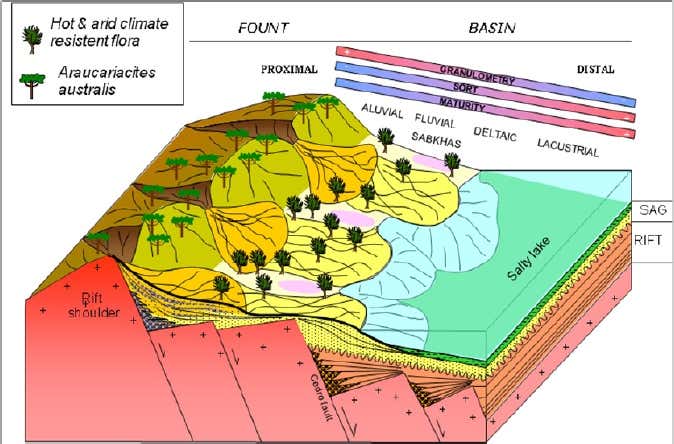 Here is a link to a paper describing a paleoenvironment dating to the Neo-Aptian of south-east Brazil. The authors liken it to death valley in California; an inland hot, dry basin with alluvial fans/salt lakes and nearby high lands. The dominant flora, inferred through palynology studies, is Classopolis (cheirolepediaceae) with lesser components of gnetales. Auraucariacites pollen is inferred to have blown in from nearby cooler, wetter highlands.

The paper I presume was written by geologists working in the petroleum industry but it is of use for me in that I often ponder what Mesozoic arid lands were like. We have talked about cheirolepidiaceae before and from what I have gathered in my readings pollen of this extinct conifer family is often used as a proxy for dry environments. Spore from various cryptograms (ferns, bryophytes, etc), conversely, is generally regarded as a proxy for more mesic conditions by researchers. But that is not to say both floras did not intermingle and co habitat to various extents. As I have discussed before modern species of Selaginella exist in very dry habitats, including death valley itself. Instead of spreading through spores, vegetative growth is often predominant for these sporophytes living in xeric conditions. Putative sporophytes living in arid conditions during the Mesozoic may have likewise spread predominantly through vegetative means and palynological studies would likely not capture their presence.