So I've been working on a picture for a couple of weeks now in color pencil. And since I've been staring at it so much while working on it I have grown kind of sick of it. Anyways there are some things I like about it, some things I am not so happy with....

Of course what grabs your attention is the saurian carnage- and that is no mistake- and if you want to read about why the fleeing toddler sauropod is mauled and why that Torvo is ripping some huevos out of the Allosaurus- read my post here. On the heels of the recent "All Yesterdays" backlash maybe I should preface everything with a "highly speculative" label.

Anyways I don't want to talk too much about the beasties depicted, although I should mention that I got inspiration for the Allo from the Perentie monitor of Australia, but what I do want to talk about is my

my choices for the vegetation. As I outlined in one of my earliest posts (Mesozoic Big Three) conifers, cycads, and ferns, although doubtless important during the Mesozoic, are over represented in depictions of Mesozoic vegetation in my opinion. Artists will often choice from a palette of pines, auracarians, generic cycads, tree ferns and run of the mill groundcover ferns. That being said I consciously went for vegetation of a slightly different bent. And although I do use conifers, cycads, and ferns in this pic I did try to portray them in slightly untypical styles. Also I tried to add color to the landscape. It is a common sentiment that the Mesozoic vegetation was colorless due to the lack of flowering plants and this attitude prevails in much of the art depicting this period. But if you look at the full panoply of plants which may have existed in these habits there is actually much option for color; the strange cones of cycads; weird hues in the wood of conifers; sporangia on ferns and horsetails; the weird pseudo-flowers of gnetales and seed ferns- perhaps even colorful enough to attract insect pollinators- you have a lot of color to choose from. And also keep in mind that even in angiosperm dominated landscapes you don't necessarily see a riot of color everywhere you look- think about savanna grasslands or tropical jungles- you mainly see hues of green, browns, and tans.

I picture the environment depicted here as part of the upper reaches of the Morrison formation-perhaps alluvial fans emanating form the Eastern mountains, Late Jurassic North America. It is a semi-arid area, but recent showers have greened up the landscape. In texture and mode it feels like chapparal, or scrubby savanna. The ground has a reddish, oxidized hue to it.

The knarly twisted juniper-looking conifers is a hypothetical cheirolepidiacean conifer and they dominate the landscape. The groundcover is a mix of putative types- I draw them in discrete bunches implying a type of slow motion war between the plants as they clamber for space, sun, and water. 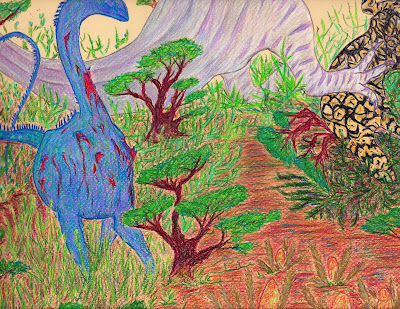 The Baby Blue Bronto is in a patch of Ephedra like plants. Ephedra is a
type of gnetale and I invoke them here as a quite successful plant of arid conditions-as they are today. We do have good evidence for members
of the Gnetophyta in the early Cretaceous- perhaps there were ghost lineages going back further? The plants behind the Bronto and underneath the Torvo are putative whisk ferns. Whisk ferns, although allied with ferns, are another  botanical anomaly- we don't really know much about where they came from or their fossil record. They lack true roots but instead rely on mycorrhizal fungi. They spread with rhizoidal structures and lack true leaves but have chlorophyl in their stems. Today they are found widely scattered around the globe, suggesting perhaps a more widespread distribution in the past. The cycads in the foreground I depicted with their trunks underground, forming underground stems like a few extant cycads (Bowenia, Strangeria). I drew both male/female varieties and gave them some
color as well. Maybe they released weird toxins into the soil to inhibit other plants. Little spreading ferns exist in the north side of the conifers and spread little runners during the wet season. The dense, mat forming vegetation under the Allosaur is a clump of putative lycopsids. Like the Resurrection plant they go dormant during the dry and spring to life rapidly with the returns of the rains. Here I depict them forming almost a grass like thatch of growth, spreading indefinitely via rhizomes, cropped back by hungry dinos.

You will also notice that I gave some hue & color to the soil itself. This is to imply a sort of biological soil crust, common today in arid regions, composed of a diverse community of moss, lichens, fungi, cyanobacteria that I suggest were common in appropriate environments during the Mesozoic. Perhaps even some dinos regularly nibbled these crusts? 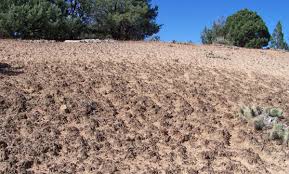 Today soil crusts suffer from trampling and take many years, sometimes centuries to recover. Perhaps a community of crusts, ideally adapted to the large- but spreading- feet of many dinos existed forming a unique aspect to Mesozoic ecosystems?

And finally to the right you can see a large, amorphous, ctulhu looking clump of vegetation in my pic. That is another putative gnetophyte- this time based off the strange Welwitschia of the Namib desert.
This guy grows only two leaves- but they just keep growing- and have weird reproductive propagules. 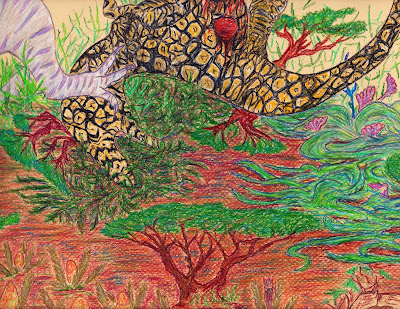 Anyways what I hoped to do with this piece is get your attention with the dino carnage but really draw you in to the vegetation/environment as well. Just as there is a fossil bias for verteberates, there is a fossil bias for plants as well. There are just so many facets of the past we may never know. However I do not think we should get too conservative in construing possibilities just because the evidence is not ideal.