As I write this we are now in the midst of the NBA finals. Both the Miami Heat and OKC boast their respective big three of LeBron James, Dwayne Wade and Chris Bosh  and  Kevin Durant, Russel Westbrook, and James Harden. It was the Boston Celtics who first introduced us to the concept of the "Big Three" in professional basketball when Kevin Garnett, Ray Allen, and Paul Pierce joined forces for a series of runs at the title. Chiefly a media creation, these players account for a large proportion of the offensive load on their teams and garner an even larger proportion of the media coverage. But whenever any of these players are interviewed about their team they generally shun away from talk of their "Big Three" and defer to a team first philosophy and the contributions of various role players.

In most popular descriptions of Mesozoic flora I come across a similar trope of the dominant plants of Mesozoic ecosystems. I call them the "Mesozoic Big Three" because although they carry a large amount of the load the contributions of other players is often neglected due to the emphasis on their roles.

1) ferns- the ubiquitous ground cover of the Mesozoic, generally any dinosaur drawing will have a couple of these guys dotted across the landscape- usually under trees because ferns don't grow in full sun right? 2) cycads- somehow this slow growing palm looking dude was everywhere during dino times. We know it was slow growing because  modern cycads are simply living fossils unchanged since the Mesozoic, right? 3) conifers- Just throw a couple of x-mas tree looking dudes in there and your Mesozoic landscape is complete!

Well hopefully your sarcasm detector was on (sarcasm can be a bit hard to convey in written form) and you were able to see that I am trying to convey how our modern perspectives on these plant groups may in fact color how we view their past relatives. Ferns, generally seen as obligate shade plants, can survive in full sun with adequate moisture. Modern cycads are not unchanged since the Mesozoic and may not in fact be an ideal proxy for Mesozoic cycads. And the classic x-mas tree shape of pines is due to their adaptation to surviving in climates where heavy snow fall occurs. Mesozoic conifers, evolving in conditions lacking heavy snowfalls, may have more closely resembled the Lebanese cedar pictured above. 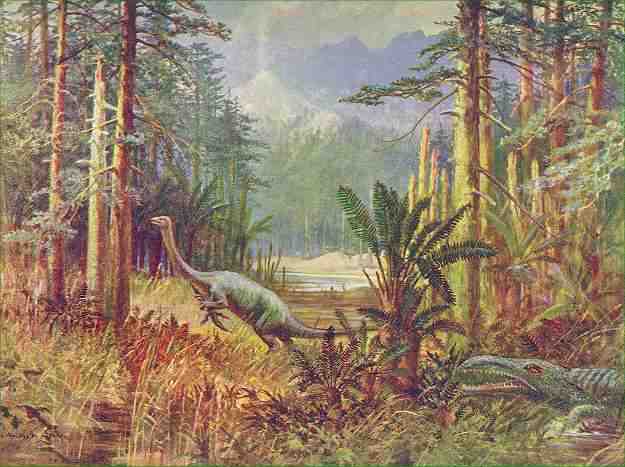 I know this is an old post, but I am so glad to see I'm not the only one tired of all the Christmas trees foresting dinosaur paleo-art. I always thought they horribly looked out of place in the predominantly tropical landscapes they were supposed to represent. I also agree with your other posts about dinosaurs being placed on barren patches on dirt, with all the vegetation in the background, way too often.

While there were certainly deserts and other open environments in certain parts of the world throughout the Mesozoic, I prefer to place most of my dinosaurs in lush jungles with lots of vines and recognizably tropical plants. I spent six years of my childhood in Singapore, and I always thought the rainforest vegetation growing over there was gorgeous, and evocative of the primeval Mesozoic. I've also drawn influences from the backdrops of Tarzan, which was always my favorite Disney movie.