"All Yesterdays" is All the Rage You can't penetrate very far into the paleo-blogosphere these days without coming across rave reviews and accolades for the new speculative, paleo-illustrated book All Yesterdays. It seems Conway, Naish and co have seized a real zeitgeist moment in how our restorations of lives past have and will be dealt with in the fundamentally speculative arena of paleo-illustration. And this shift in paleo-illustration, which, lets be real here, essentially means is a change in how dinosaurs are being portrayed, amounts to this- the era of Gregory S. Paul is over.

It is a little disheartening that the work of Greg Paul, so pivotal to the dinosaur renaissance, is being raked over the coals the way it is these days. I can still remember vividly the impact Predatory Dinosaurs of the World had on me as a young lad when I purchased that book for a measly 8.99 $ at the LA County Museum of Natural History during their Dinosaurs: Past & Present art shows of the late eighties.

I mean, I had never seen dinos like this before. It was like they were creatures from another planet- cut from sinew, bone, and froth. They were beautifully disturbing in some otherworldly way- and still are. But perhaps mine, and others, attractions to GSP dinos stems from this "alien" quality to his work. Animals simply don't look like this.

Central to GSP dino's are his attention to anatomical detail- he rigorously maps out every bone and muscle attachment-painstakingly so. The flesh and muscle placed over the musculo-skeletal framework is but a veneer to highlight the intricacies he mapped out below. But a quick perusal of modern animals shows that this "shrink-wrap" effect is not the norm. In fact one is hard pressed to find any verts in which skin, muscle, fat, and integument do not obscure the vast majority of the skeleton below.

As beautiful as the depiction is to the right a couple of anatomical issues arise. The "arse" region for one is just too damn svelte, massive caudemofemoralis muscles would have plumped it up. Secondly, the rear of the thigh would have most likely seamlessly merged into the tail- following this muscle. The head is classic shrink wrap- although dinos certainly lacked the well developed facial muscles of mammals- many other features could have added to the head. Of course a comparative picture gets the point across better, see Conway's shrink wrapped cow below.

Do the cow and iguanodon look eerily similar?

Don't get me wrong- I love me some GSP artwork, and no doubt many active dino paleontologists owe some of their career to him- but it seems in the constant push/pull of paleontological illustration and scientific knowledge that even the most scientifically rigorous paleo-illustrations are doomed to extinction.

It is my hope that as paleo-artists become more aware of the repeating memes and biases that creep into their work that they pay due diligence to the floral context they place dinosaurs in. I have spoke before about the "mesozoic big three" of conifers, ferns and cycads and how varying combinations of these plants dominate much of the depictions of Mesozoic scenery- while in reality the flora was much more diverse. And I do see the beginning of a parallel revolution towards the depiction of Mesozoic flora (as in the animals)- not just in terms of variety- but also showing plants in various states of decay, growth, dessication etc.

I also think it useful to point out a repeating meme in dino illustrations and that is the dinosaur conveniently framed by vegetation on an empty patch of dirt. Although, like many memes, not explicity wrong this repeating motif is exceptionally common if you look for it. You will notice this framing in both the therizinosaur by Conway above and the Iguanodon by GSP above as well as the Apatosaurus by Troco below (a new fave btw).

Again, not incorrect- just very prevalent when you look for the framed by vegetation on a patch of dirt repeating meme in dino art. 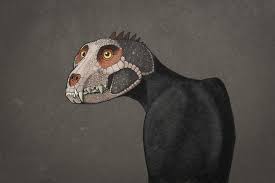