Inuldge in more theropod madness in my book Dinosaur Enlightenment: Piercing the Veil on Kaiju Dinosaur in an Age Of Disruption now available on Amazon in ebook and soft cover!! 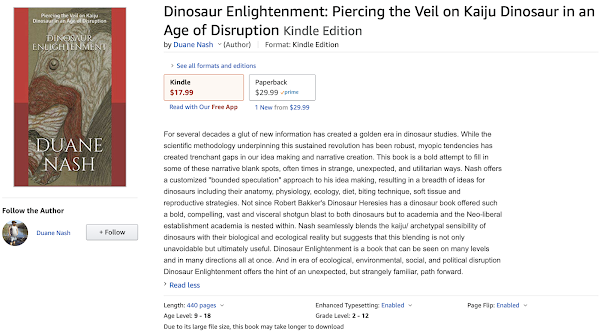 Deep in the Peruvian Andes lives an astonishing tradition. In isolated villages throughout the area natives enact a symbolic clashing of civilizations. An Andean condor (Vultur gryphus), is captured, fed and groomed for several weeks, and finally latched onto the back of a bull in an arena.

This visually startling tradition kicks off the annual Yawar, or blood festival. In the eyes of the native Peruvians the bird represents native Incan resistance, or even an Incan god, triumphant over the imperializing Spanish forces represented by the bull. Injury or death of the bird is seen as a portent of bad luck for the coming year.

Now here is where a rather lengthy discussion pertaining to obvious issues of cruelty to animals and conservation ramifications for a dwindling population of these birds could be inserted. Countered in turn by charges of cultural relativism and the hypocrisy of western industrialized nations own dietary dependence on mechanized, polluting, CO2 enriching, factory farmed cruelty ridden meat crops.

BUT THERE WILL BE NO SUCH SENTIMENTAL BLOVIATIONS IN THE GRANDE GUIGNOL THEROPODA!!

Instead, for a more meta-analysis that should resonate with this audience, let the bull represent the merauding advances of synapsid mammalia and the condor represent the hallowed heritage of archosaurian theropod dominance.


The following, very tenable, paleo-fiction should best be enjoyed with the following Alice In Chains song "It Ain't Like That" cranked loud for maximum deathly ambience. Plus it has the line "vultures cry when flesh is ripping". And the singer died of a heroin overdose to lay rotting in his own house for several days before being discovered, there's that too. 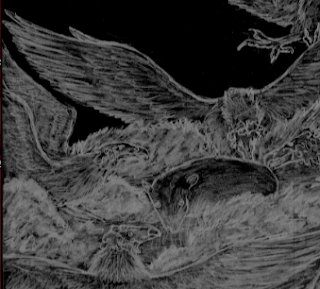 Bison antiquus was the most common - and most aggressive - large herbivore of the La Brea plains and foothills. The young mother of this calf - it was her first calving - had in its life already faced down and survived encounters with dire wolves, smilodons, lions, and short faced bears. She was 2700 lbs of hoofed combative weaponry. But she had underestimated the predatory tactics of these birds.

While she had noticed the teratorns before - they always seem to be a dominating presence at any large carcass - in her finite thought processing machinery she had never considered these birds on par with the other four limbed terrestrial carnivores that she had dealt with. This was a grave mistake - because although the birds posed no threat to her - terratorns are responsible for more new born calf depredations among La Brean hoofed herbivores than all mammalian carnivores combined. The  other grave mistake of the mother was in choosing to give birth in the open sagebrush plains. Other, no doubt terratorn savvy, more experienced cows opted to calve in dense cottonwood/willow riparian thickets. In these closed quarters the big birds with their 12 foot (4 meter) wingspans could not manoeuvre.

And this flock of terratorns - the Bombardiers - anticipate at least some of the young bison making this mistake and every calving season gather in this same locale in anticipation of them. While other terratorns work in smaller flocks harassing deer, peccaries, and antelope for their newborns this flock has grown specialized - some might say even developing an incipient culture - in preying on bison calves. Some of the Bombardiers are over 50 years old and have been refining their hunting tactic for this long. The long life span and observant nature of these birds gives them an exquisite knowledge base concerning the habits of all the other fauna on the La Brean plains. They know when and where the mammalian predators move. How to follow turkey vultures that could locate a carcass in dense foliage with their sense of smell. When to move to the coast to feast on seabird colonies, marine mammal carcasses, and pinniped mortality events. When and where each herbivore species gives birth. Time and knowledge is on their side.

When the first terratorn struck it did not do so from the sky but it approached from the ground. And its object of intent was not the calf but the mother - nipping her on the tail just hard enough to send a shudder of pain through the mother's psyche. The cows next response at this unexpected intrusion was confusion, bewilderment, and ultimately anger. The bird had counted on this response. The mammalian brain was hardwired for emotion. The terratorns' brain was unencumbered with such emotional sentience. Instead the computational hardware of the bird brain had a much faster processing CPU. Information was gathered, processed, and acted on accordingly based on a constantly shifting positive/negative benefit scale.

And so as the cow reacted to the increasing rage at the thought of this "mere bird" plucking at its tail it failed to notice the eleven other terratorns in the sky and on the ground who had been watching in anticipation for the mother to leave its calf unattended. And as she obliged their wishes by charging after the first terratorn - which mockingly sauntered off not by flying away but by nimbly running away - they fell upon the calf. 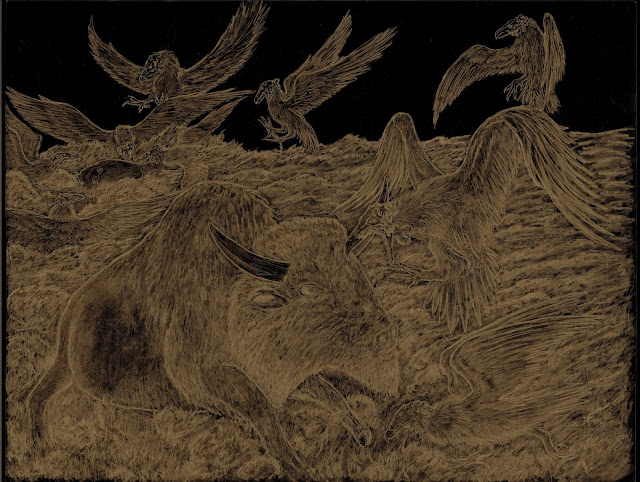 The birds went for the softest parts first - under the limbs, the neck, the anal region. No one bite was fatal. And the action was fast and almost imperceptible. While the large hooked jaw was the most obvious feature of the bird and the first to suggest how it killed the true damage occurred inside the bill. After the hook of the beak had seized a plug of tissue then the cutting technique commenced. Rapid fire movements of the stiff and serrated tongue would grind and pulverize the flesh against the minute rows of serrated papillae on the roof of the mouth. Augmented by rapid oscillation of the neck musculature the whole operation was incumbent not upon bite strength - which the bird lacked - but speed and friction - which the bird had in abundance.

In above gif note the large/stiff tongue starting to move back & forth in the male condor as it anticipates a feed. Another similar and independent observation of more rapid tongue movement in a griffon vulture with a hole in its neck from which its tongue lopped out was observed in Spain (Camina & Guerrero. 2013) and France. The morphology of the tongue - convergent in New & Old World vultures, and several tubenosed marine birds - notably giant petrels - is referred to as canaliculate. This style of tongue follows the contour of the lower jaw, with a canal or trough in the medial section, and serrated edges on both lateral edges.

By the time the mother bison realized that its newborn was being set upon by numerous teratorns she had been drawn away from her calf by over 60 feet (20 meters). Blood had already been spilled on the chapparal. Now confused, bewildered, and even more angry at these developments she rushed back in defense. However the teratorns, now emboldened by the taste of blood on their beaks,  redouble their efforts. They harry the cow from all angles. Several swoop from above at opposite angles, while others dart around on the ground like macabre turkeys plucking at her back legs and tails with their serrated tongues/papillae. And again they raise her ire to the point where she charges furiously at birds but in doing so leaving her calf open to repeated attacks.

The more experienced terratorns have several tactics that prove especially infuriating to the cow. One of these used during ground operations is to feign running away and when the cow draws near and prepares to gore the bird the bird deftly leaps off the ground and kicks its talons off the face and horns of the bison. And in doing so uses the momentum of the charging cow and their high wing loading to quickly become airborne. 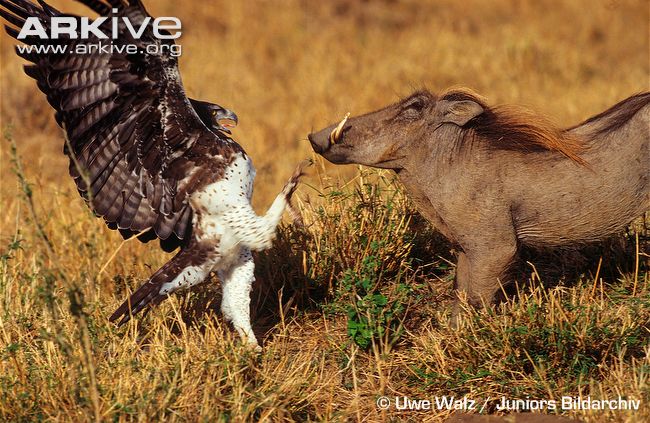 The repeated strikes at the cow from ground and air and her fruitless charges have worked to fatigue her after 10 minutes. While her girth, power, and weight worked to her advantage against land bound mammalian carnivores they are proving a liability against the birds. They are always one step ahead of her. Meanwhile the body cavity of her calf has been breached and the birds are now essentially eating it alive. Her counterattacks have become increasingly half hearted and now the birds, sensing her loss of resolve, don't even bother to lift off when she charges and feed with impunity right in front of her. Smarting from the eventuality of the situation, her increasing fatigue, the blood on her own face, and the realization that she herself is now vulnerable to predator attack due to her fatigued state she concedes her calf to the birds.

And over the next several weeks the Bombardier flock continues to feed on bison calves - and even does battle successfully with a giant camel for its newborn. Several birds become so gloated that they can't fly and roost in some local oak trees until they digest their load of mammal flesh...

So that's my take on Teratornis merriami. It should come as no surprise to you that I don't really take seriously suggestions that it was some type of piscivore (really? terrestrial socal is not too much of a fishy place now or then - especially in tar pits where the great T. merriami is often pulled from). Or that it was some type of small prey land stalking specialist... eating rabbits (seriously sometimes paleontologists, in the pursuit of "conservative" interpretations actually jump the shark into less than tenable realms)? Nope this was a bird that was intimately tied to and dependent upon the large megafauna it co-evolved with and eventually became extinct with.

And while I am not the first to suggest such aggressive predatory tactics in teratornithids I am certainly the first to frame it in this fashion with an emphasis on calf predation/group tactics/choanal grinding.

Now I did this little bit of - extremely plausible - speculative paleofiction on T. merriami cuz, you know, I'm a California guy. You can make up what you will with what was going on with Argentavis magnificens... 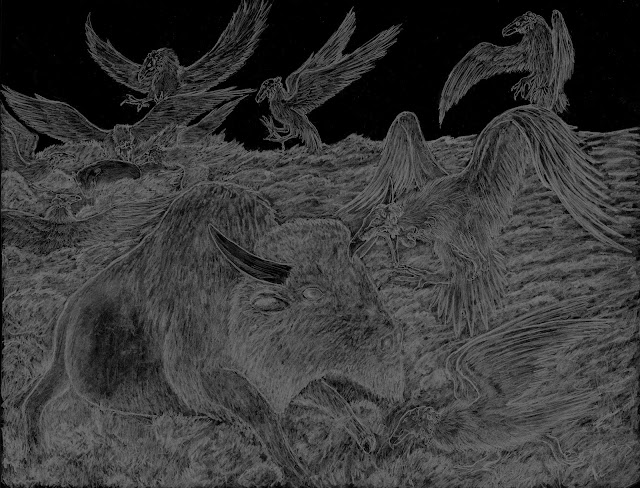 Well then, Teratorns could have been more terrifyingly awesome than people think they are. This scenario actually makes perfect sense, and ties nicely into their evolution and extinction. Great post as always, and I look forward to more Theropod biomechanics and overall badassery ^^. Great song choice btw ;).

Thanks and I'm glad the song works, personally when I read the post at the same time as listening to song it adds to the atmosphere.

If the modern teratorns could do this, what could Argentavis do?

Good question!!! I'll let your imagination go wild with that one.

It would be very freaky indeed to see an Argentavis flock dismember some notoungulate then have two Kelenken try to claim the meal.

This is so funny... I saw Alice In Chains perform this song in Boston. By then, Layne Staley had already passed, and it was with the new lead singer. Still, Jerry Cantrell was pitching in with vocals, so I guess that makes 1/2 of the original sound. Such a random place to find this song...