Plesiosaur Machinations VIII: The Strange Case of Cope's Mosasaur Inside an Elasmosaur

Animals sometimes do weird and inexplicable stuff. Even highly intelligent mammals like this short finned pilot whale (Globicepha macrorynchus) that tried to swallow too big a fish (Mahi mahi?). Now I have always felt that team synapsid gets short changed in terms of their dental arsenal not having the ability to constantly replace old/worn teeth like diapsids.  But, and more pertinent to the fate of this whale, team synapsid for whatever reasons is generally impoverished compared to diapsids in the ability to evolve a particularly stretchy throat to accommodate large food packages. With the exception of baleen whales I can not think of any mammals that have anything equivalent to a gular pouch that expands the opening to the esophagus for large food particles. Why is this? I don't know.

Now to be specific I am not talking about bowing of the bones in the mandible to accept large pieces of food but specifically the stretchy area of integument that covers the open "V" shaped area medial to each side of the mandible and extends into the "throat" and which allows animals with even fixed mandibles to eat particularly large chunks of food. Such as this large nile crocodile below struggling to swallow an infant hippo (although amazing we never see if the croc really gets the hippo down) ?!? On a slight tangent I wonder if the smaller crocs surrounding this big boomer and flencing off bites from the hippo are females he mates with and hence displays tolerance towards.


Now as you are watching the video pay special attention to the throat region of the large male and see the distended gular pouch effectively increasing the entrance to the throat. The gular pouch works the same way in monitor lizards, pelicans, and cormorants (and probably most carnivorous theropods). And pelicans swallow some damn big stuff too.

So if you look at these skull pics of an immature nile crocodile to the left I want to draw your attention to the pic of the mandible on the bottom right. You will notice; the fused symphysis - also found in plesiosaurs; the conical, slightly recurved teeth - also found in most plesiosaurs; and notice the negative space on the interior of the mandible - this is where the expandable gular pouch lies which increases the size of the throat opening. And you should notice that in plesiosaurs a similar negative space - this "V" shaped area is also found.

Now traditionally the maximum parcel of food a plesiosaur is said to ingest corresponds to the diameter of the distance from each edge of the lower mandible. And if this dictum was followed for crocodiles it would produce a result of maximum food size ingested a lot smaller than what they actually accomplish. Same with monitor lizards, cormorants, and pelicans for that matter - even with flexible lower jaws. Now if plesiosaurs were synapsids, like the above unfortunate pilot whale, I would say that is a good proxy to determine maximum size of prey ingested. But being diapsids and being opportunistic carnivores lacking serrated teeth there is more than enough ecological and familial justification to infer a gular pouch in plesiosaurs. And this would substantially increase the maximum size of food ingested by plesiosaurs.

Beautifully displayed in this inferior and slightly oblique view of the skull of Styxosaurus (South Dakota School of Mines & technology link ) you can imagine that whole area on the underside of the mandible - the "V" shaped negative space - sporting a highly elastic gular pouch spreading wide to slide down fish, ammonites or whatever else it chooses to schlurp down. And if you think about the general shape of ammonites and a lot of fish actually in the side-to-side dimension they are relatively narrow but in the top-to-bottom dimension they are relatively longer. And with the jaws being hinged so far back plesiosaur could indeed open up wide - as the otherwise dated picture below by Charles R. Knight depicts.

Now the prospects for what plesiosaurs may have put in their belly broadens quite a bit. And, as you probably know, there are plenty of accounts of stuff found in the belly of sauropterygians ranging from published to anecdotal. And one of the most amazing and seemingly improbable is Edward Drinker Cope's account of a mosasaur, reportedly Clidastes, preserved in situ inside an Elasmosaurus. Now, like most, I had discounted this report just out of hand. But it always pays to go look at the paper itself, and with the magic of the internet and the increasing trend of digitilization Cope's 1872 account from The Proceedings of the Academy of Natural Sciences of Philadelphia is online here. 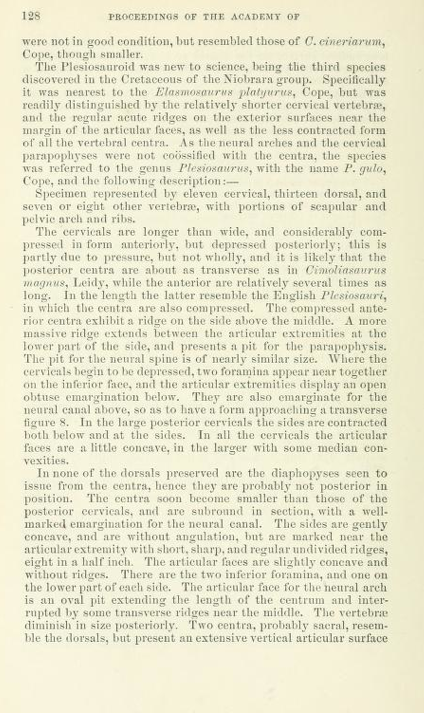 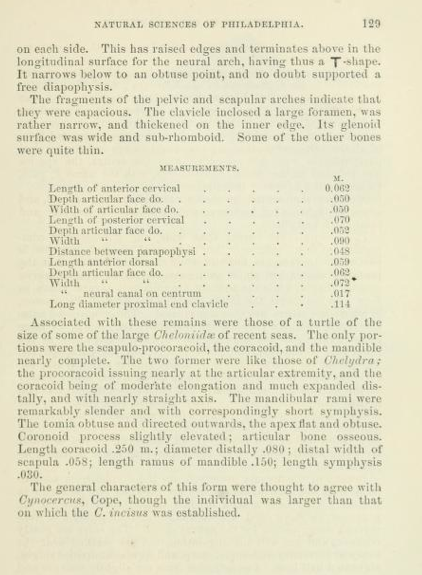 Now, there are a number of marks against this; it was not collected by Cope but by Joseph Savage; it was scrappy and poorly preserved; and we don't have the mosasaur material anymore nor are we even sure it is Clidastes. And also Cope was the man, who just a few years earlier infamously got the head on the wrong end of Elasmosaurus to much embarrassment.

But it is also worth mentioning that mosasaur inside the elasmosaur was published after the head on the tail debacle. Would Cope be so reckless with his professional reputation as to attach his name to another dubious elasmosaur account?

From Cope's account from Joseph Savage (the collector): "the vertebral column of the Clidastes was found immediately below that of the Plesiosauroid and in a reversed position as though it had been swallowed by the latter or larger reptile."

Now here I should interject that the identity of Clidastes is not equivocal and Mike Everhart (Oceans of Kansas) is suspect due to Clidastes being nearly extinct during the deposition of the Pierre Shale (so it could have been any mosasaur), Cope did not collect it, and the general scrappy and incomplete nature of the specimens.

"The largest vertebrate of the Clidastes were about three quarters the length and one forth the diameter of those of the Plesiosauroid, and the animal must have furnished a large, or at least long, mouthful for it's captor."

This is not as alarming as it sounds with regard to the length of the vertebrate. Plesiosuars have short, almost fish like vertebrate. Mosasaurs, not having long necks and with a shorter tenure in the ocean than plesiosaurs have relatively longer vertebrae. But these skeletal dimensions might offer a test of whether or not an elasmosaur, even with a distensible gular pouch, could have swallowed a mosasaur of those dimensions. And if you were to pick a mosasaur that might have been small enough to have been swallowed you can do a lot worse than Clidastes. They generally top off at about 3-4 meters and the size of recently published  Clidastes "pups" was about 2 feet/ .66 meters. It lacks the relatively deep chest of more advanced mosasaurs and is often described as harkening back to less derived aigailosaurs both in form and ecology. It was the most common mosasaur on the Gulf Coast, and with the exception of a find in Germany, did not penetrate very far north. It may have lacked the physiology for colder waters and lacked a blubber layer. It is very eel like.

Delving further into this strange - and unfortunately lost to science - fossil amalgamation I think it useful to play out some thought experiments on possible taphonomic scenarios that would have created this association. As I have mentioned several times in this series the torso of plesiosaurs was very rigidly constructed. The vertebral column, ribs, gastralia, pelvic and pectoral girdles formed a very solid and inflexible internal "shell". Drape thick muscles, tendons, and ligaments over the whole armament and you have a fairly strong framework - a structure that would be fairly hard to penetrate and also not too rapidly crumble apart after death. My point is trying to imagine how a small dead mosasaur would become enmeshed inside this torso taphonomically speaking becomes difficult to imagine. First the base of the neck had to become torn off, exposing the one large entrance near the front. Even here this becomes difficult to imagine - this area in plesiosaurs seems very robust with pectoral muscles and high vertebral processes supporting a heavy musculature. Anyways that neck opening has to be made and then - here it gets even more difficult to explain - the small carcass of the mosasaur has to make a miraculous entry into the torso either by drifting inside or being washed into it somehow headfirst through that small opening where the neck attaches to the torso. Remember that Savage specifically noted the orientation of the mosasaur (headfirst) and that it was underneath the elasmosaurs vertebral column. And also it should be mentioned that parts of the pectoral & pelvic girdles of the elasmosaur were present so it was not just the plesiosaurs spinal column rolling around isolated. Additionally cervical vertebrae were noted so that the neck was not completely out of the vicinity. And you should also note that turtle remains are also noted in the vicinity... stomach remains or taphonomic sorting?


At what point does it becomes more difficult to imagine how the mosasaur landed headfirst inside the torso of the elasmosaur than simply concluding it was actually swallowed? Also given the incomplete nature of preservation it is also possible that the mosasaur was partially dismembered prior to being swallowed. 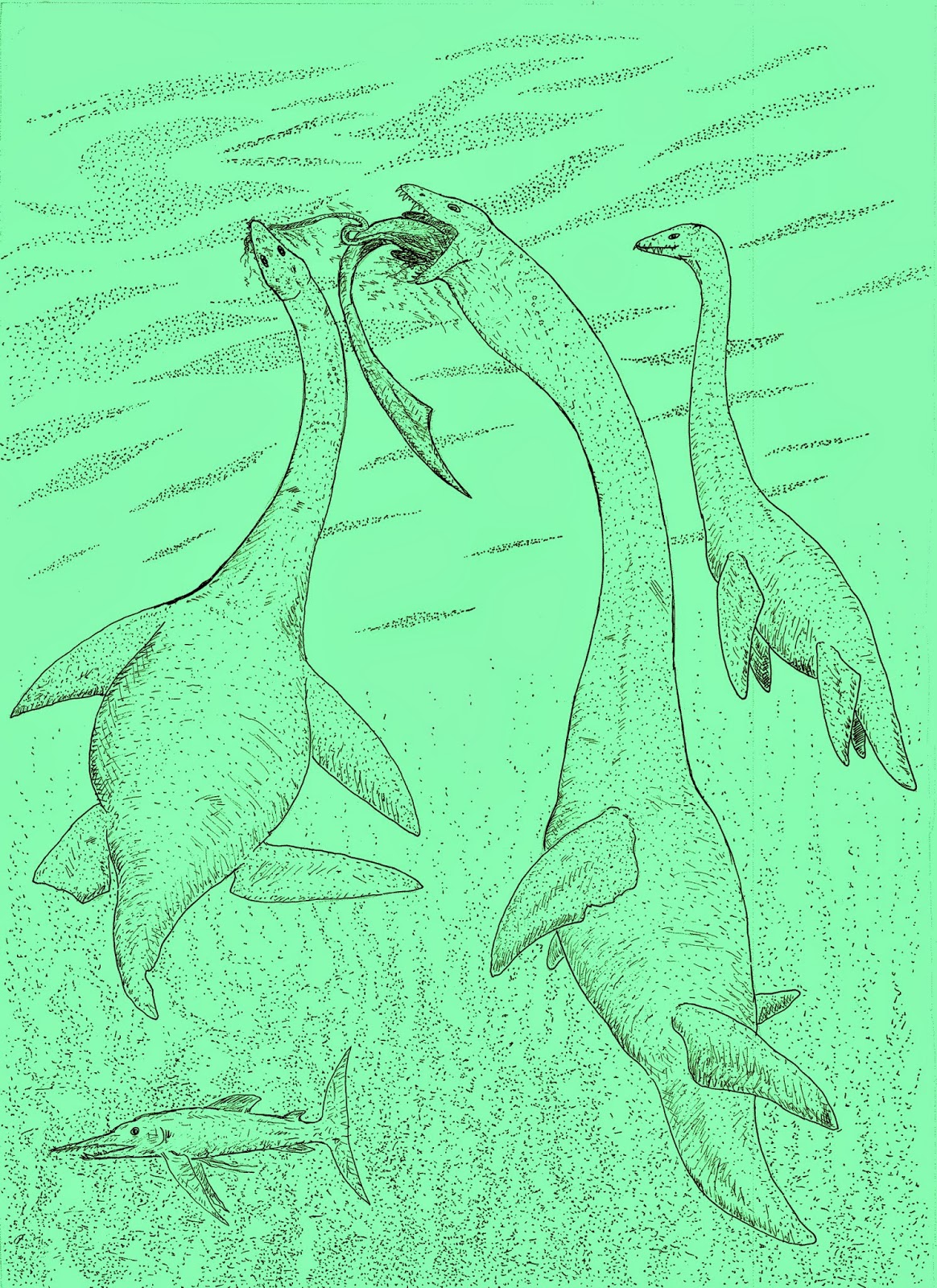 Coming up for the next installment of Plesiosaur Machinations, I will look at the shark/ichthyosaur eating plesiosaurs of the Sundance Sea. I leave you with another pic of Styxosaurus highlighting the large area hypothetically filled by a gular pouch and enlarging the size of prey swallowed by plesiosaurs.

so just guess what a macropliosaur could engulf...

One other possibility is that the little mosasaur was scavenging the plesiosaur carcass. A larger predator may have take a chunk out of the plesiosaur or there was another soft spot that the little mosasaur burrowed into. Its greedy little self trying to get to the squishy bits farther inside and then it couldn't get out and drowned. Not terribly probable, but plausible.

I think we need a series similar to this for spinosaurs.

I have written a lot on spinosaurs and will do more so in the future. Time time time.....