In quick succession we now have the reveal of another enigmatic mega-theropod of far ranging lore and speculation: Deinocheirus mirificus (Lee et al. 2014). What strange and wonderful times in dino-paleo where in one year two of the most mythologized and sought after dinosaurs are revealed. Not only that but there is much to suggest that both were more than a little ecologically linked to aquatic resources!! Congrats to Lee et al. on their paper and discovery!! 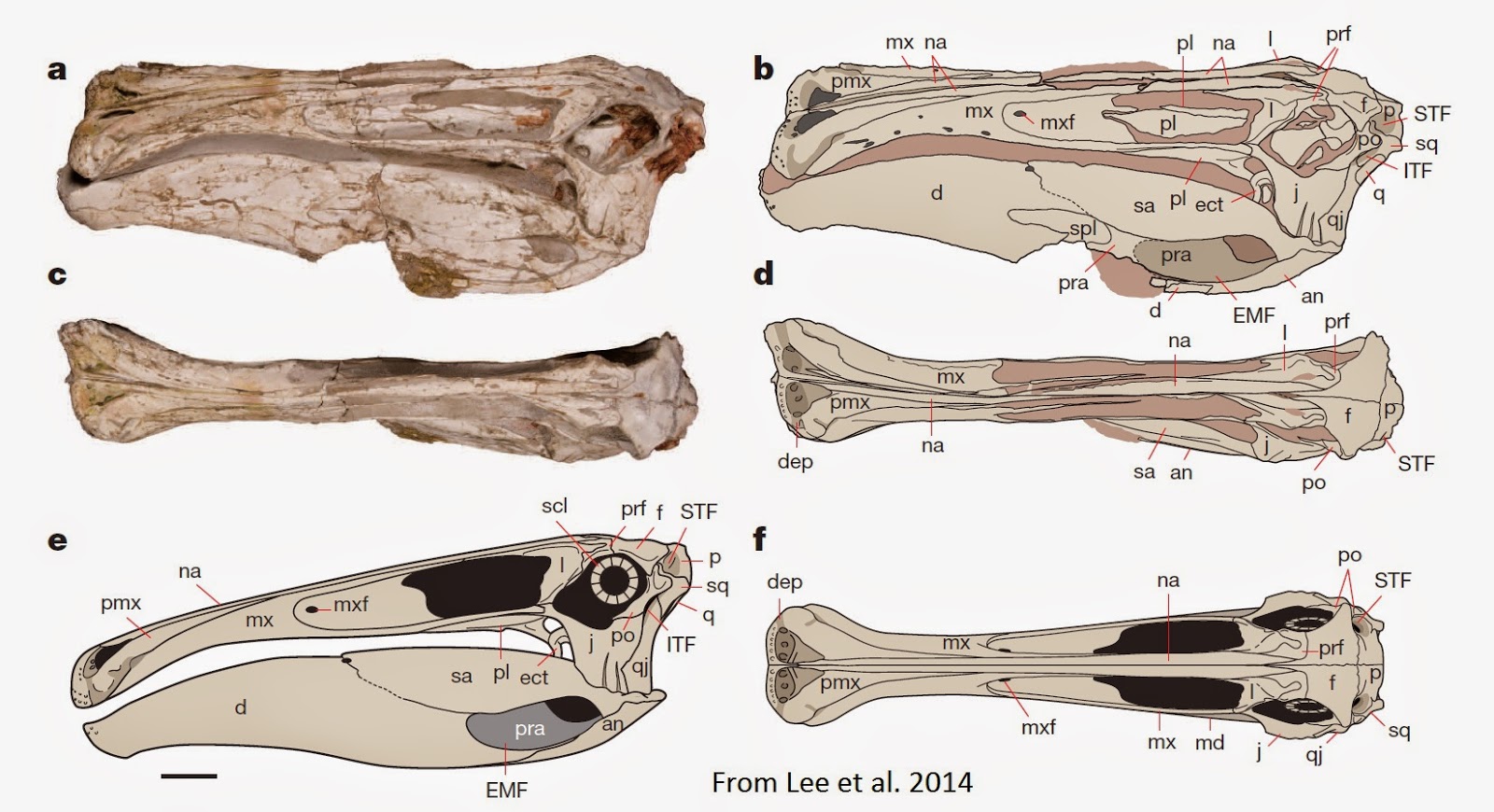 When the first photos of the skull of Deinocheirus were leaked online I made a basically off the cuff post arguing that we should be open to the potential of a dinosaur the size of Deinocheirus acting as sort of a massive waterfowl - a dabbling megaduck if you will. Inspired by the awesome rendering by Andrey Atuchin I suggested an emphasis on aquatic resources, particularly Azolla fern, as a dietary staple.

Turns out my musings may have been closer to the mark than I could have even anticipated.

Remains of the foot (right pedal digit II and unguals) are consistent with a graviportal adaptation and possibly even suggest weight distribution on unstable substrates (i.e. mud).

And finally the preservation of fish scales/fish vertebrate/gastroliths hints at exploitation of aquatic resources.

Very cool. although no doubt some will call these finds into question in terms of taphonomy. But altogether the duck bill, putative stomach remains, spreading toes and hoofs, and wet habitat of the Nemegt suggest very strongly in favor of a generalist aquatic omnivore - a true duck-billed dinosaurs.

How did the skull of the animal operate? Given an animal so large and devoid of grasping teeth, hooked bill etc etc. how did it get the numerous small fish into its stomach? I don't have much faith in this animal being a stealthy heron type aquatic stalker. It was just too large and bulky. And even more importantly depth perception appears lacking. In order to catch enough small fish to make this adaptation worthwhile this animal should have an efficient method of capture with the minimum amount of energy and effort expended. Instead of looking to herons let us look at the wood stork (Mycteria americana) for possible insight into how this animal may have operated when catching fish.


What you want to notice in the above video of the stork foraging is that, unlike stealthy herons, the stork is intentionally disturbing the water and substrate in order to get small prey up in the water column where the sensitive bill can snap 'em up and also to make its own movements more cryptic.

Also check out this video below where you can better contrast the similar foraging strategy of the roseate spoonbill (Platalea ajaja) against some egrets. It should not be to difficult to notice some striking similarities in form and possibly function between spoonbills and Deinocheirus.


Seen in the context of these two birds the relatively long skull, light build of skull (possibly for rapid sweeping back and forth), and unusual stance start to make a little bit more sense. One can imagine that Deinocheirus as a spoonbill writ large could take advantage of fish (especially trapped), mass emergent aquatic insects, crustaceans and other invertebrates. Like the wood stork in the above video perhaps intentionally disturbing the substrate with those two handy eight foot long arms/claws in order to scare up prey and conceal itself.

It has also been suggested that the mouth as a whole acted like a bit of vacuum cleaner sucking up food. This would require a tight seal around the mouth which brings up the whole cheeks versus non cheeks issue. This adaptation would also suggest strong facial/oral muscular control ability - more of a mammalian adaptation and not necessarily a strong suite of archosaurs. But then again it is not currently ruled out and what about that massive turtle that sucked up small prey recently discovered? So who knows dabbling, probing, sucking or all of the above in various degrees.

Of course it is hard to imagine such a large animal subsisting entirely on small aquatic organisms surely a little roughage was in order to round out its diet? In my other post I suggested Azolla aquatic fern as a potentially important food source. It likely had a worldwide distribution. Used today to fertilize rice paddies it reproduces exponentially, is high in nutrients, and has even been championed as a possible carbon trap and livestock/poultry feed.

I can find no reference to Azolla in the Nemegt but I would expect it to be present given how aggressively aquatic organisms spread. There was a nice recent paper on aquatic plants in the Maastrichtian of Patagonia. A diversity of emergent vegetation and floating types were all potentially Deinocheirus fodder.

But one paper I did dig up was one that is online for all to see and is a real barnburner (especially for all you tets rule plants drool types): Upper Cretaceous Charophyta From the Nemegt Basin, Gobi Desert  from 1969!! A diversity of ostracods (small crustaceans) from the Nemegt is also known.

What is Charophyta precious? Charophyta is a division of green algae and includes the closest sister group to land plants. And more importantly for our purposes here they spread quickly via clonal growth  across the bottoms of bodies of water. And there are 13 species known from the Nemegt.


An even stranger potential food stuff would be Nostoc. This is a colonial cyanobacteria, It has a worldwide distribution and grows in all types of habitats. But it is especially hardy in terms of surviving drought conditions. When on land it is inconspicuous, but with the addition of water swells up into a jelly like mass. I first encountered Nostoc when I was investigating beaver on the Santa Ynez River in Santa Barbara county for my other blog Southland Beaver (shameless self promotion but you should seriously check out it out). I was so intrigued by the stuff that I thought I had discovered some weird new type of freshwater brown algae!! I sent the stuff to an aquatic plants specialist in New York where he looked at it under microscopy and told me that it was just Nostoc. Cool and weird stuff anyways.

Anyways cheers and thanks for stopping by and reading this - I put it together rather hastily and just wanted to get something out there for Deinocheirus. 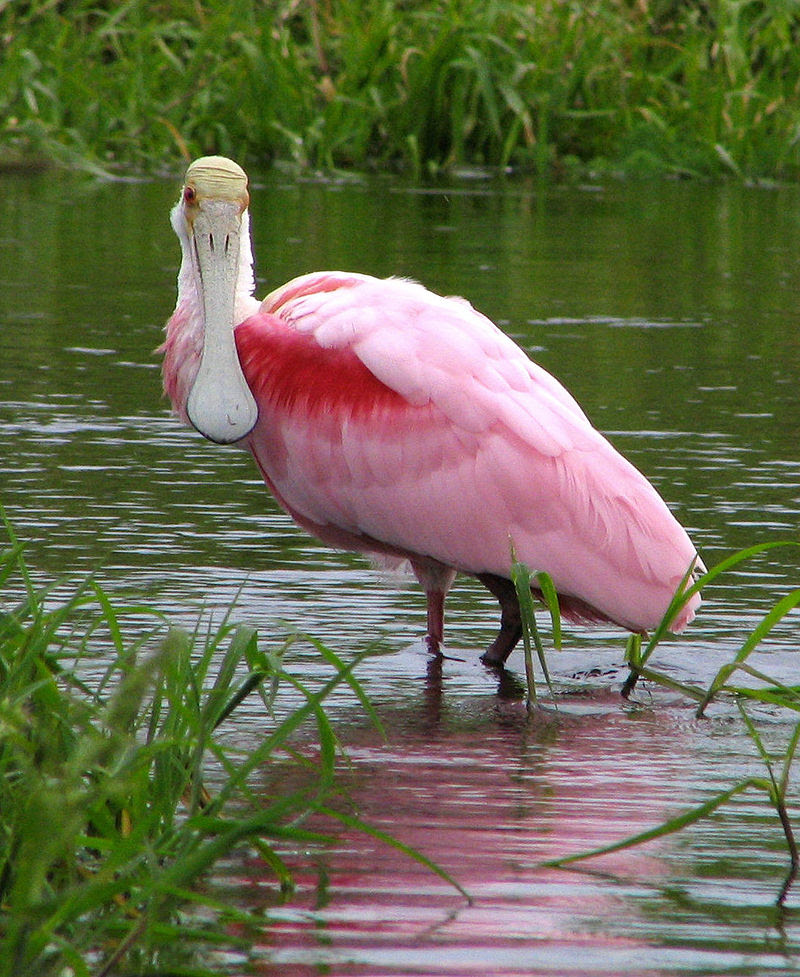 I suggested this and was called a fanboy that wanted it to be a giant land predator (which wasn't what I was saying at all), guess who has the last laugh