Death Roll: Not Just for the Crocs... 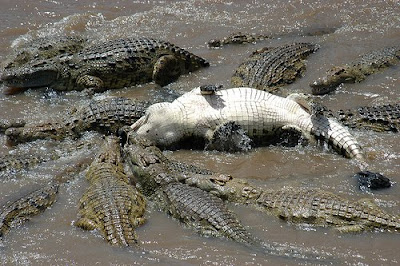 Few predatory maneuvers are as visceral, jaw dropping, and just plain brutal as a crocodile putting it's prey through a battery of death rolls. Whether to stun, drown, incapacitate, dismember or kill  the hapless victim a death roll, or if you prefer the more sciencey terms twist/rotational feeding, is a full contact predatory sport. From the tip of the snout to the tip of the tail the death roll utilizes every inch of the crocodiles' length. But since the action happens so fast it may be useful to slow things down, as in the pics below, to really get an appreciation of this synthesis of predatory power.

Feel free to follow the link above to read the article and get the mathy discussion there full of vector angles and angular momentum. But what is interesting when you look at this series of photos is that although the head, body, and tail maintain the same general orientation to the viewer the body parts do change with respect to each other. There are loads of death roll clips on you tube, below is a good one that shows what is going on fairly well.


Why the death roll is so devastating is that it creates significant torsional forces, and animal tissue does not respond well to torsional stress. This is due to the anatomical orientation of Langer's lines or lines of cleavage which are the natural orientation of collagen fibers that roughly

Many fish do the death roll. At about the 2:30 mark in this video you can see two Polypterus bichirs do a little death roll. And here are some nice death rolls by some more bichirs with some hilarious commentary to boot- makes me miss my ornate bichir. Also check out Bichir's midnight snack crazyfest for more nice bichir death roll action. Amphibians get in on the fun to with many salamanders, amphiumas, caecilians, and mudpuppies often reportedly using the tactic to dismantle prey too large to swallow. Lizards will occasionally death roll, especially monitor lizards, and even for small lizards the death roll may be a more common activity than realized when dealing with prey that can not be swallowed as the video below suggests.

But probably the group of animals most known for death rolling after crocodilians are the Anguilliformes- the eels. In eels you see the attributes that more or less unite all death rollers; a long, low body; legs or fins that are small or can be tucked against the body; pincerlike teeth with a strong bite: minimal or non-existent dorsal fin.

Remember when Jeremy Wade covered himself with fish guts and was subsequently nibbled by New Zealand Longfin "flesh ripper" eels? One does a little death roll on his kevlar gloved hand. But check out this video of some longfins death rolling a deer carcass.. kinda grim.


Moray eels will also death roll, especially when tackling octopi, but even in water too cold for moray eels you have massive Conger eels.

An unprovoked attack on an Irish scuba diver, Mr. Jimmy Griffin, by a Conger eel took place in 2013. The attack occurred 25 meters down and the impact knocked his regulator off. According to Griffin the hit felt like a punch to the face and it then rag-dolled him before spinning off a chunk of his face, presumably in a death roll.

Well as you can see, death-rolls, no matter what critter is performing them are no joke!!! So roll with them LOL!!!