Life and Death at a Southern Californian Estuary: Part I

I guess you would call this a photo essay, in the modern parlance, or a quasi taphonomic processes inspired rumination of a highly human modified but no less interesting habitat. But let us divest ourselves from this semantic poofery- if you get stoned and walk along the beach you will see some cool stuff... 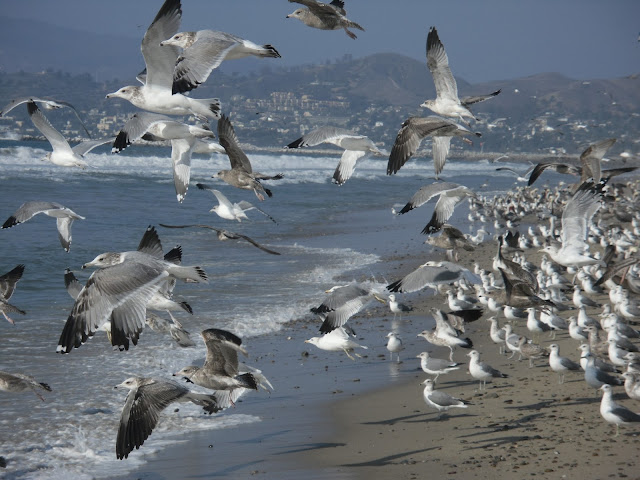 The scene is McGrath beach in the city of Ventura. More specifically this is the embattled Santa Clara River estuary. The Santa Clara river is the largest non-channelized river system in southern California and is one of the last bastions of hope for a number of threatened and federally endangered species including the southern steelhead salmon (Oncorhynchus mykiss)- the most arid adapted salmonoid in the world. Despite the critical habitat and potential source of civic pride the river the river should imbue it is a highly human modified habitat, beleaguered by invasive organisms, water diversions and urban/agricultural runoff. 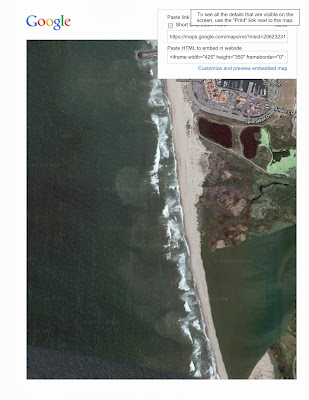 You can see from the pic that although it is a large body of water, upriver the river runs dry this time of year- and has for several months. The Vern-Freeman diversion takes the lions share of water, diverted in order to replenish the Oxnard aquifer
and combat saltwater intrusion due to agriculture sucking up all the water via wells. But this begs the question- where is the water coming from? Well if you look at the google pic above you will notice a couple of ponds to the north of the estuary. These are settling ponds from the Ventura wastewater treatment plant which empty directly into the estuary. Say what you will about human modification, upriver water is being taking away but at the estuary it is given back. In essence the fish/birds/and habitat here is greatly augmented by this human input and provides the bulk of water during much of the year as seen below. 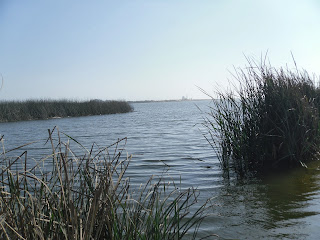 Of course just because the water is there, does not mean that the proper ecological players are in place. As you can see from the pic to the left nice tule beds are present and the emergent vegetation is  providing habitat and food for animals. Unfortunately many stretches of the santa clara are over run with Arundo donax, the giant reed, an invasive that crowds out natives through its aggressive, rhizomatous growth. It dramatically alters the vegetative succession of an ecosystem and this fire adapted, fast growing grass is especially harmful in southern Californian riparian ecosystems because it sucks up tonnes of water and does not provide a shading canopy- both detrimental to water limited environments. As seen below in the picture it makes dense, monotypic stands, even growing in standing water. 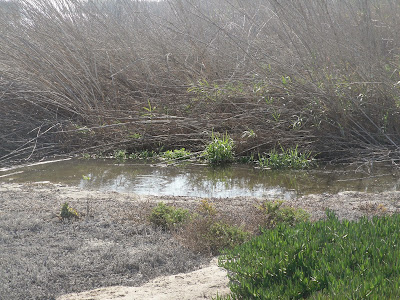 In this picture you can see vast stands of Arundo- they seem to be dying back this time of year, but one can hope that they don't like standing water as much as is portrayed on the internet and the death is real. In the foreground is another invasive of Californian sand dune habitats- iceplant or Carpobrotus edulis. And you have one more invasive in the picture, do you see it? It is not a plant, it is a fish- a carp- its presence betrayed by the slight disturbance in the water. Yes that junkyard dog of the fish world, carp, are very abundant in the Santa Clara estuary. Unfortunatly where willow thickets should dominate, Arundo prevails. Instead of steelhead salmon you have carp. And instead of diverse sand dune plants you got stands of iceplant.

After walking past this ecological battlefield I came to the beach berm. This is where sand pushed up by the often times large surf here literally plugs up the estuary disallowing any outflow. Again you can refer to the google earth image and see this strip of sand separating the ocean from the estuary. During times of high outflow. i.e. seasonal flooding or humans taking a backhoe out to unplug it, the bulk of the estuary can literally drain away, sometimes leaving fish (including steelhead) high and dry. For this reason the berm remains until nature uncorks the estuary.

And it is in this transition zone that bodies really started piling up. I mean a literal killing field. 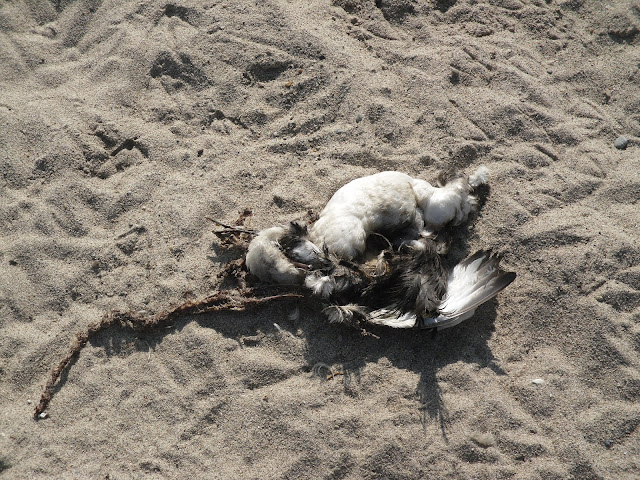 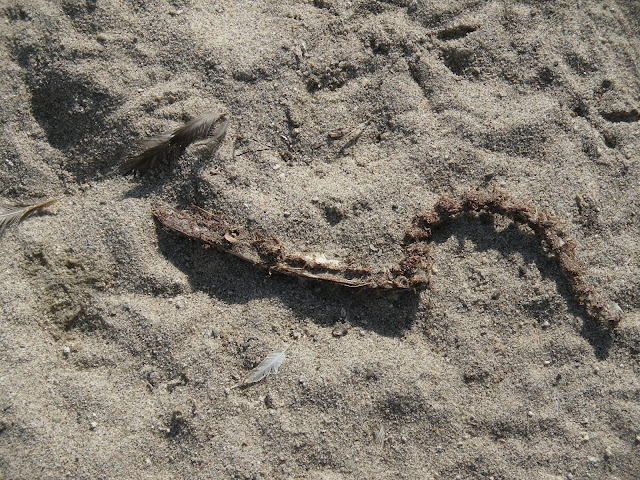 Now I don't know what if anything was killing the birds. Toxic algae is a likely culprit. What was interesting was that a fair number of the birds were western grebes, which were fairly common on the estuary as shown below. But I did notice some dead gulls and pelicans, which roost here in great numbers. 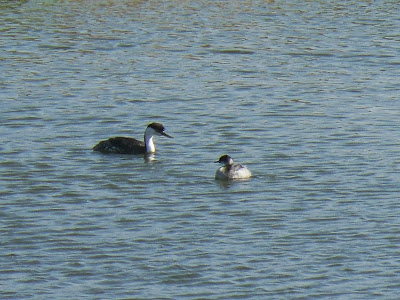 But the grebes appeared to be dying in fairly large numbers. And something was eating them. 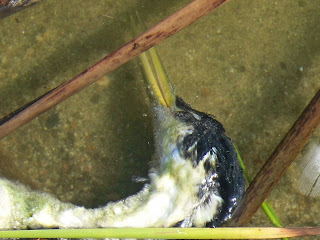 I kept noticing the same pattern of dismemberment. The arm bones carefully picked clean but not crunched or disarticulated. Also necks were strewn about but still articulated. 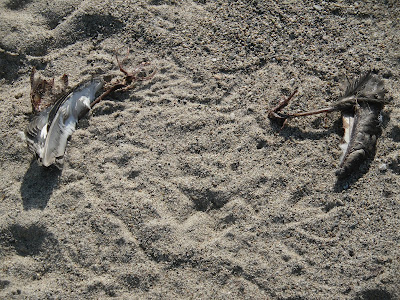 Here each wing was picked clean and the torso taken elsewhere. And in the pic below you can see a cleaned wing. Finger lickin' good!! 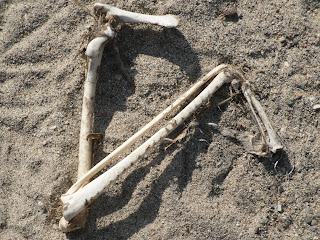 Clearly there was some scavenger modification going on here. Coyotes? I doubt it they could easily chew up the whole skeleton. Same probably for raccoons. Who was doing this? In the haze of the surf spray some figures emerged from the gloom... 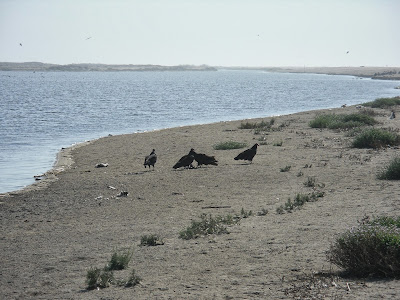 Yep our old friend the turkey vulture, Cathartes aura, was up to its usual tricks. When I got to where they were at I got some immediate vindication of my suspicions. 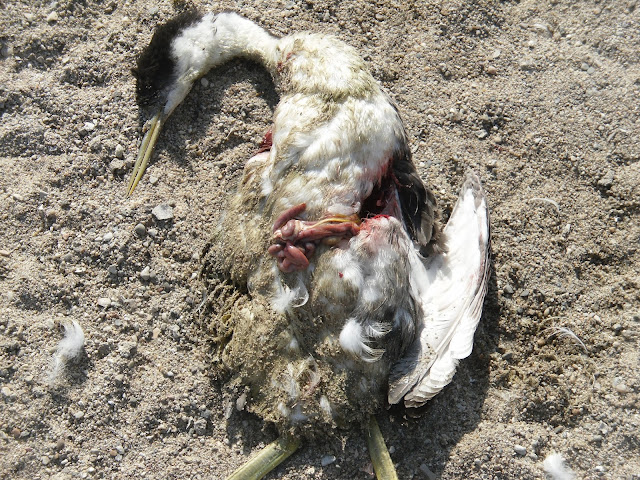 The gang of scavengers had a literal smorgasborg of bodies to choose from. Besides the numerous grebes there were gulls that had been killed by swallowing hooks and monofilament. 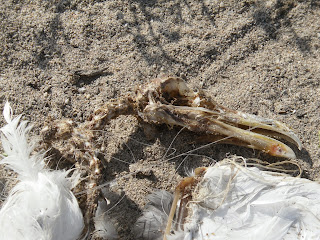 And if the vultures got sick of fowl there was also lots of dead carp to snack upon. 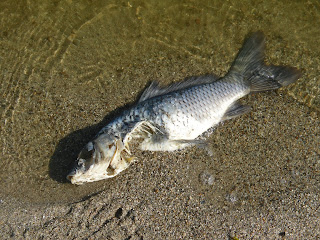 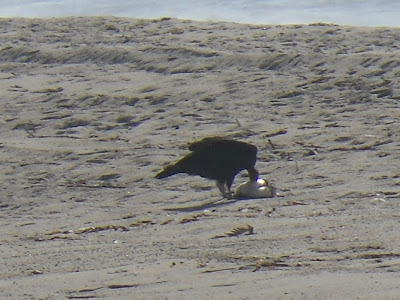 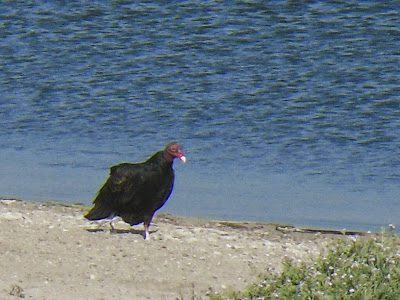 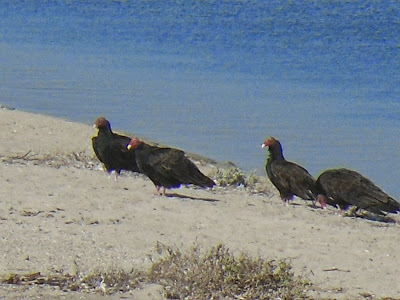 What was interesting to observe, aside from the carcass dismemberment and interesting taphonomic processes going on in an obvious depositional setting, was the interesting sociality of the turkey vultures. They did appear to have some obvious group dynamics going on here. I wonder how intense their bonds are? Do they roost, feed, and forage together? Or do they just tend to know each other because they frequent the same diner?

Here are some pics showing how a vulture moved a carcass about. Here is the body, to the right is drag marks. Also notice the footprints. 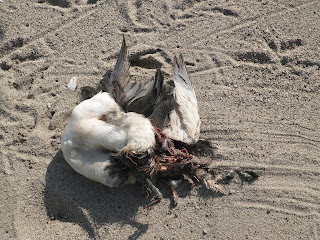 The vulture dragged it a bit... 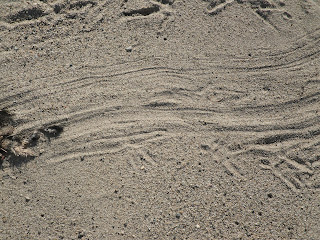 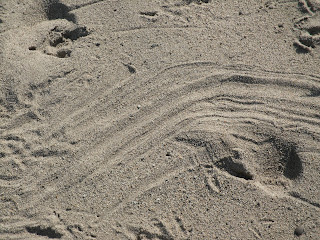 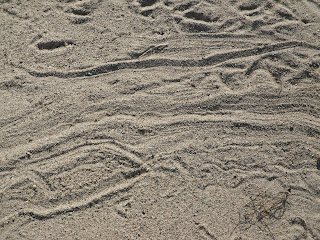 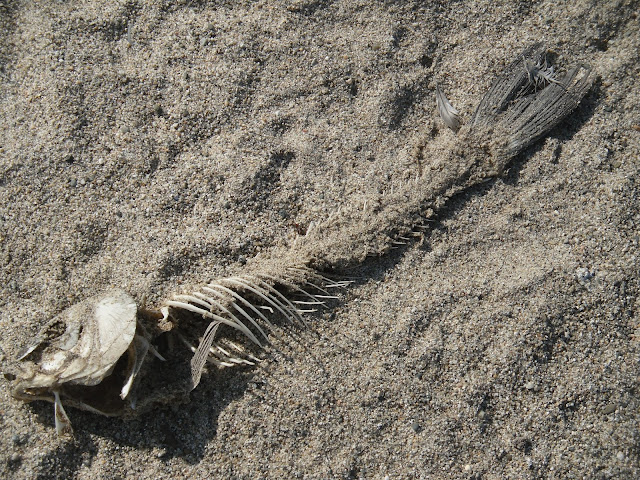 In my next post more dead bodies, including some BIGGER stuff, the surf zone, pretty birds and more interesting taphonomic processes. 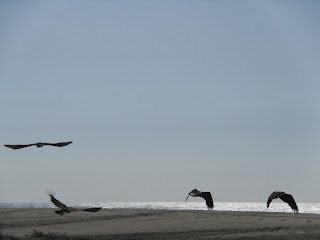 Those arms picked clean and left as the sole remains of a grebe remind me of us only having the arms of the holotypes of *Deinocheirus* or *Therizinosaurus*. In their case though, the meatier bits were presumably eaten while the relatively thin arms with their obstructing quills were(or even primaries)left by scavengers to become fossils.

Thanks for commenting BrianL. I had never really thought of that... interesting potential insight to carcass utilization. I guess those relatively spindly arms would have been rather low on the mesozoic meat market value. Especially for those pot bellied therizinosaurs.