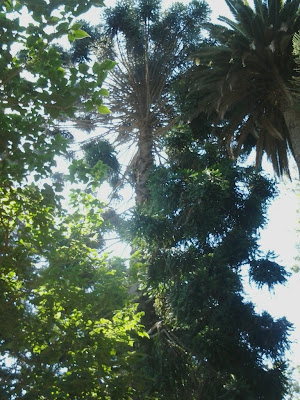 It should come as no surprise that I love the araucarian conifers. Their reptilian scale-like foliage, interesting trunk textures, evocative architecture, not to mention their near ubiquitous presence in many Mesozoic landscapes- these are some trees that really stop and arrest the mind. And in this manner they are not too dissimilar to the dinosaurs that roamed underneath their canopy.

And what about those cones.... 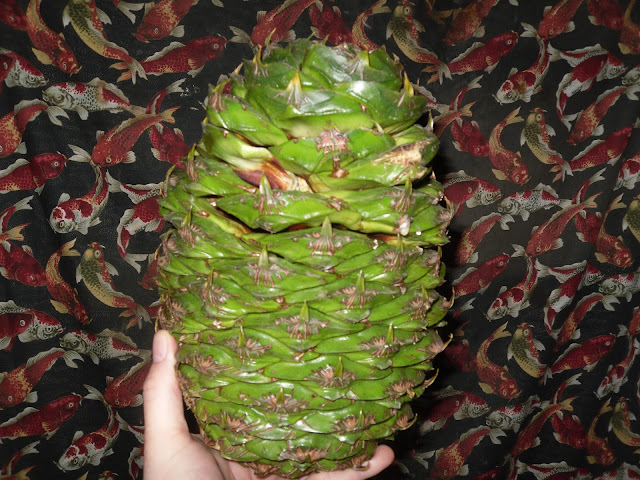 The cone above is the roughly pineapple sized propagule of the Bunya-Bunya pine, Araucaria bidwillii. I retrieved the above specimen from the historical garden of the Victorian Sexton House in Goleta California. Now the Sexton's were one of the first pioneer nursery growers in California (you can blame them for introducing pampas grass here) which mean the tree from which this guy fell could have been planted in 1869.

It is no coincidence that you generally only find the Australian bunya-bunya   planted on these old Victorian estates in California because they are not really it for the suburbs as these cones are
dangerous weapons hurtling from drops of 100 feet or more, creating definite impact craters on the ground below. Once the cone falls and hits the ground it may break apart into little nut containing 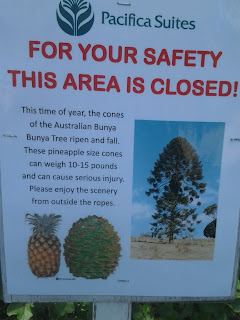 husks or it may break apart naturally or from animal disturbance. I had to leave mine parked inside a truck fro a couple hours and it rather quickly fell apart when I got home, which makes me wonder if heat help the process.

Although it would be a stretch to say the tree depends on any one type of animal to distribute these seeds in an intense coevolutionary handshake these seeds are routinely consumed by a number of critters. Various rodents and brush-tail possums consume the nuts in Australia as well as being a popular type of bush tucker for aboriginals and introduced peoples of Australia- even sometimes available at farmer markets and road stands. I guess it has a chestnut type of flavor, not oily but starchy and with some protein. I used to work as a tour guide/gardener at the old Winchester estate in San Jose and we had a couple of crows that had learned to pick up the husks and drop them from elevation on concrete to release the seed.

Of course such a large, knarly cone begs the question: Could a sauropod, say a big Brachiosaur or Titanosaur choke one of these guys down? For the big brute sauropods it often goes unrecognized how big some of these guys heads were. And sauropods certainly were bite and gulp type eaters so they probably had some roughened muscular esophogeal linings, but I am left wondering about those backward projecting spines on the cone. It is easy to imagine how, like multiple little fish hooks, they might get caught on the way down and pose a choking hazard.

Like a crocodile swallowing a spiny finned catfish headfirst could sauropods have circumvented this problem by manipulating the cone in such a manner that the spines were turned back and it wend down flush? It is hard to ascribe such a possibly learned behavior to sauropods. But what I have observed in many animals is that even the dullest critters can make a good turn of wit when it comes to food.
Furthermore, it is quite possible that the immature
sauropods/other dinos waited opportunistically for broken cones below the trees. Such a meal would be a relatively rich one in the Mesozoic flora for growing dino hatchlings.

Do we even have cones this big of araucarians from the Mesozoic? It turns out we do. Araucaria bledensis from the Late Cretaceous of Alabama was at least as large. Cones from earlier in the Mesozoic, such as Araucaria mirabilis were much more modest in size. This gradual increase in cone size through the Mesozoic has led some to suggest that certain conifers were in a type of size race with sauropod dinosaurs. And this is a little ironic when you consider sauropod predation pressure from theropods helped spur their own size increase.

If you want to go further go read The Araucaria Family: Past & Present. 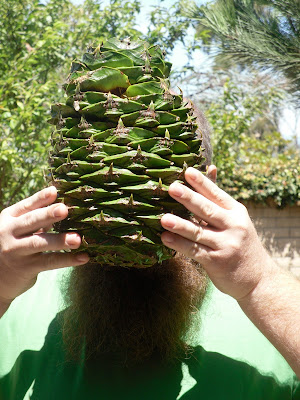