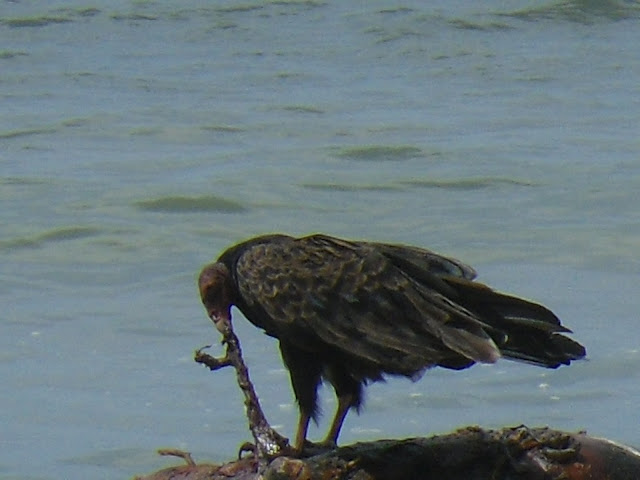 Blogging is a funny thing. You can spend loads of effort/time on a post that you consider pretty neat, interesting, and unique. But it only receives a trickle of hits. And then you can pump out a quick post on #awesomebro #dinomaniac #dinosaur carnage and it gets loads of hits.

So here are some more flesh rippin' theropods as promised. Turkey vultures and a lone gull on a ripe California Sea Lion photographed by yours truly at the Ventura River Mouth, Ventura California. 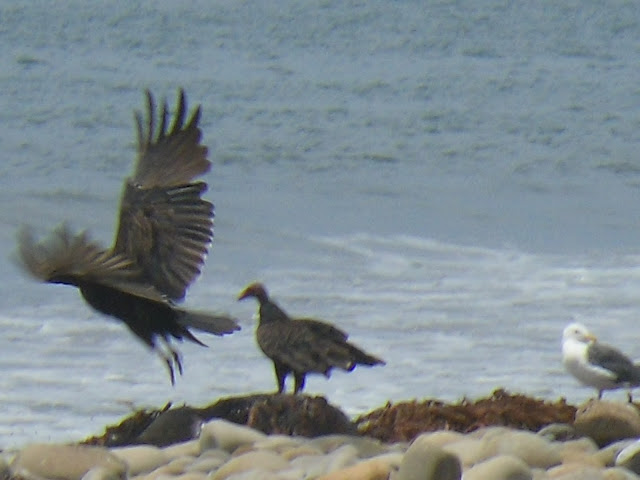 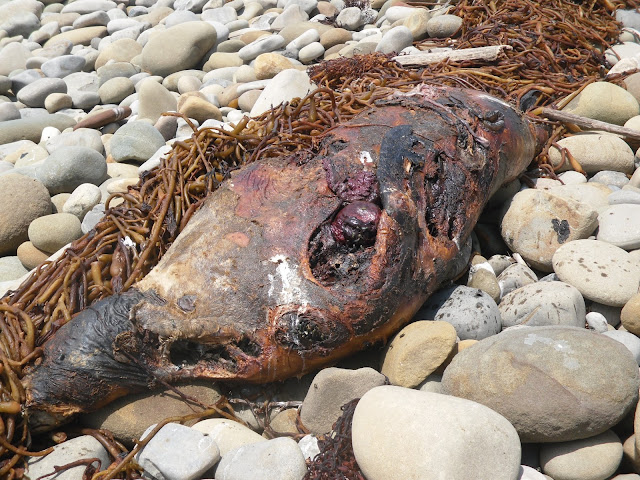 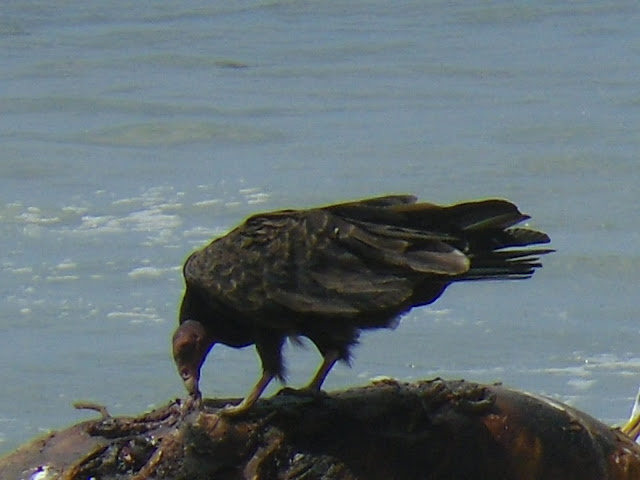 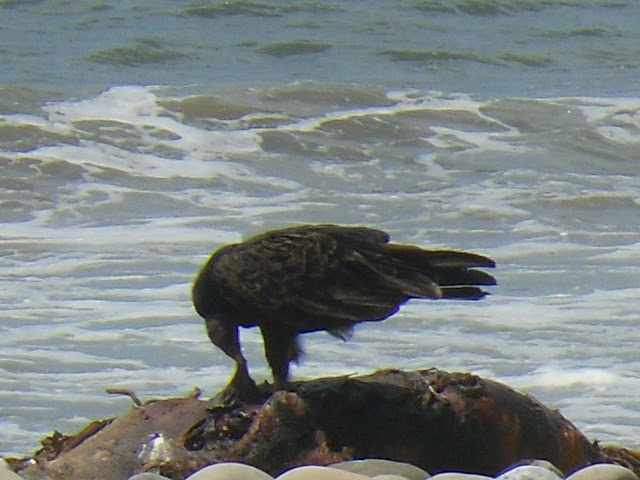 A couple of hundred years ago and the turkey vultures would have likely been joined by grizzly bears, condors (still extant but rare now in Ventura county), wolves, and maybe even the occasional jaguar. Go back 10,000 years or so and you have a whole other guild of mammal predators; dire wolves, short-faced bears, smilodons- not to mention giant teratornid birds.

Its long puzzled me why we don't see more obligate soaring scavengers during the Mesozoic in the fossil record. Sure you have isiodactylids- but so far they appear limited in time and scope. Azdharchid and other types probably exploited carcasses opportunistically. I'm just a little perplexed at the lack of soaring obligate scavengers in places like the Morrison- it was fairly open with a diversity of large bodied dinos- and we have predator traps there too like in Dino National Monument. Many dino faunas are just calling out for soaring scavengers.... is it really a fossil bias? Or am I just over-thinking it? Maybe terrestrial theropods were diverse and numerous enough to handle the cleanup? Maybe many pterosaurs were more generalist scavengers/hunters like corvids?

Anyways I often come across dead marine mammals on the local beaches, and I often see turkey vultures.  But here I was fortuitous enough to catch the dead body with the bird together at last. It just goes to show you that you don't have to go to the Serengeti to see some pretty neat interactions. 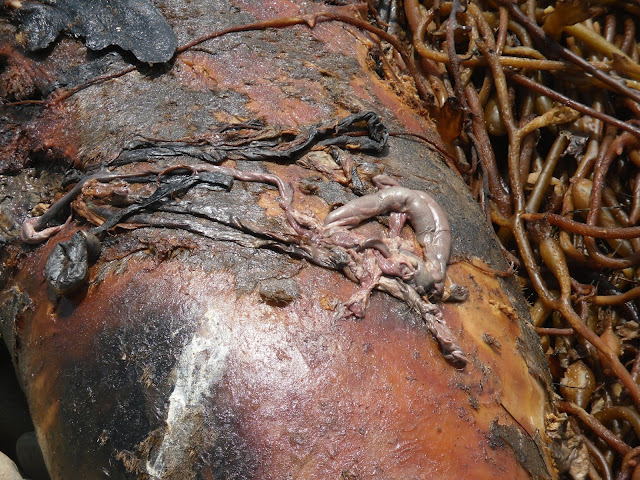 Last weekend a friend of mine told me about a lot of vultures circling over a sheep corpse, but none of them got down to taste the meat. He told me that the sheep was standing on her back with the legs right up, and vultures never feed on such spatic corpses. Curious...

Interesting are you suggesting the sheep had some type of disease... I believe birds are immune to anthrax? It was always my understanding that vultures are pretty much immune to all kinds of diseases but maybe I'm wrong. 2013 has been a bad year for sea lion pup deaths, although this sea lion is not a pup, so maybe natural causes. Toxic algae blooms and radiation from Japanese reactors have both been implicated but I don't think we know yet what has been doing them in this year.

Well, i didn´t see what happened, but my friend told me that the sheep looked too antinaturally-spastic, with the legs up, as if she had been poisoned. He believes that avoiding so "unnatural" carcasses is a mechanism of autoprotection for the vultures (Gyps fulgus in this case).

About sea lions pups high mortality, it´s a pity, specially if it has to do with radiation...and this is what we are able to see, i mean if it is so there must be much more unusual mortality underwater.

Personally, I do think the presence of theropods of all sizes and shapes on the Mesozoic landscape as well as various terrestrial crocodylomorphs made for rather effective carcass-removal. I suspect the mere gape and likely powerful stomach acids of a large theropod are something to keep in mind here. If some living predatory birds such as herons, storks or gulls are any indication, these animals could swallow huge chunks of flesh and bone whole and presumably did. This alone might allow for carcasses to be devoured more quickly than today when the largest mammalian scavengers around do not have gapes nearly as large and need to crack most bones instead of being able to swallow them completely.

Of course, there might have been dedicated scavengers around throughout the Mesozoic after all but we simply might not recognise them. Perhaps we should be looking at colonial invertebrates specialising in infesting huge carcasses? I also feel like mentioning a discussion on the DML where it was posited that alvarezsaurs may have been dedicated scavengers that used their tiny powerful arms to works themselves either deep into or out of large carcasses. That long neck and that low and long skull might come in handy there.

Good comments Brian, I have never come across that idea for alvarezsaurs before.

I gained a new found respect for gulls when I tossed one a chicken leg bone once and it swallowed the whole thing. And yes, I do agree with theropods swallowing much bone- at least some types.

But there are problems in swallowing bone when faced with say a 30-80 tonne sauropod. Here I am reminded of a documentary I saw of a dead whale carcasses in the deep ocean. Whole successions of scavengers converged and over the course of several years went at the whale. But I wonder if sauropods, with highly pneumatic skeletons and presumably lacking rich marrow, were so highly nutritious and sought after?

But I do agree that insects, maybe some strange bone specializing termites, were the ultimate consumers of much bone. I also think beaked ornithischians, esp ankylosaurs who needed the minerals, would have habitually gnawed bone.

Correction birds do have marrow and they do make red blood cells in their cancellous bones. Hip bones and big flat bones as well as well likely had marrow and such. Here is a good link w/other bird physio stuff