Aquatic Fungi Down in a Slot Canyon

I just learned that the Society of Vertebrate Paleontology is having its annual meeting in L.A. Its my hope that the visiting academia and professionals from around the world take a chance to explore the unique, rare, and persistent biota still extant or recently extirpated in the southland.

A couple weeks ago I was down in a slot canyon- the north fork of Matillija Creek- off highway 33 past Ojai in Ventura county. Now I have always had a strong fascination and draw towards riparian/waterside habitats. Growing up in semi-arid southern California has taught me that if you follow the water- you follow the animals. Like an artery flowing through the land the creek attracts the attention of animals and bipedal hominids. And such is the crux of the dilemma facing the threatened riparian flora and fauna of the California southland; water is rare and sought after by all here.


Perhaps the most emblematic creature representing this push/pull of water usage in the southern California is a salmonoid, the southern steelhead- Oncoryhncus mykiss. Living in an environment many would not expect to find such a fish in- southern steelhead can endure the highest temperatures, lowest flows, and overall roughest conditions of all steelhead populations. They seem to appear and disappear with the rare high flow events, sometimes disappearing from a watershed for years at a time and reappearing during especially wet years- El Nino events. Sometimes the adults oversummer in the deepest, coolest pools if flows are not sufficient to return to the ocean. The southern distinct population segment is perhaps the oldest steelhead genetically and shows the most promise for repopulating/colonizing watersheds in a warming world. Steelhead are ocean ran rainbow trout. Even if all adult steelhead are extirpated from a watershed as long as native rainbow trout survive in the headwaters they can still produce ocean going fry. Southern steelhead are also unique in that they can return to spawn for several years, and they can colonize and explore non-natal streams.

So when I approach a pool like the one above I always approach ninja style in the hope that I might spy an adult steelhead holing up for the summer in it. Alas I saw no 30" steelies in the creek- the odds are against me as they number about 500- but when I lifted a waterlogged piece of wood a unique looking guy that gets altogether no love appeared: aquatic fungi. 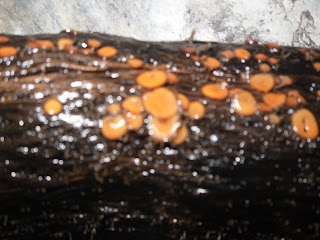 Now I am fairly recent to the world of aquatic fungi- but so are most. When wood and leafy material falls into the water fungi play a role in decomposing it. In addition the fungi themselves are grazed by invertebrates forming an important link in freshwater ecosystems that has only recently been given due credence. When researchers looked at the protein levels of leaf litter in a stream they were surprised to notice protein levels increase over time. The protein in the decaying leaves was actually from the fungal hyphae colonizing the leaves. And it is the fungi itself, not the leaf- which is a sought after nutrient for invertebrates at the base of the food chain. What type ol fungi is it? I have no idea- the study of fungi and especially aquatic fungi is woefully inadequate. Maybe someone reading this can let me know.

I also saw an aquatic theropod which flew down into a pool next to me allowing me to photo it- a hooded merganser I believe. 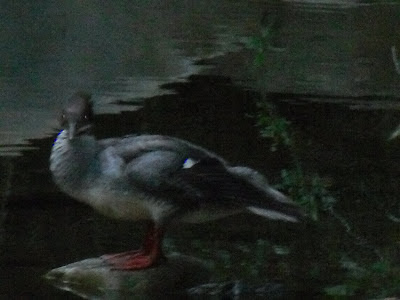