A little gardening can actually teach you a lot about plant/large herbivore interactions. Anyone who mows the lawn can intuitively understand the diffuse coevolution of grasses and grazing mammalian herbivores that has been ongoing since the late Eocene. Everything gets mowed down (eaten) evenly- grasses simply out compete everything else on the rebound. Repeat. Eventually you have a well manicured lawn (grassland). You will notice that some plants do fine with occasional foot traffic (trampling by herbivores) others do not. Some species rapidly colonize disturbed areas (rooting) in the garden while some plants germinate better in undisturbed soils. Some plants respond well to heavy pruning (browsing) others not so much. Eventually most gardeners will come upon a situation beyond the scope of pruners- time for the chainsaw!!!

Now if we take this gardening analogy to its logical conclusion we can say suid, pig-type  critters are the tillers/diggers of the world garden. Bovids, equids and other grazers represent the "lawn mower" guild. Giraffes, camels and other browsers represent the "pruning" division. And when you really need to get to business and so some really clearing you call in the chainsaw crew- elephants.

Although no doubt aware of elephant induced damage/modification of plant community it is a little startling to see the aftermath of this work in this case to a Baobab tree which is probably several hundred years old. This is plant predation of the highest order. Elephants literally gouge into the trunk with their tusks and rip off strips of the water/nutrient/fiber rich bark with their trunks. The net effect is to girdle the tree killing it outright or it later toppling over.

Sauropods are often posited as dinosaurian equivalents to elephants- except on a much larger scale. The damage that they are thought to have induced on their environment is likewise thought to be an order of magnitude greater than that produced by elephants. Indeed in popular dino texts one often reads of the "vegetative genocide" that these behemoths perpetrated on their environment.

But how true are these statements about the dinosaur induced "killing fields" of Mesozoic vegetation? Has anyone ever proved that large dinos are worse than large mammals when it comes to vegetative destruction? Or is it simply another case of big-guy bias? Dinos were soooo much larger so they should be correspondingly more destructive right?

Here is an abstract to a recent study testing the cranial biomechanics of Diplodocus with regards to possible feeding styles. Using finite element analysis researchers were able to test the efficacy of several  proposed feeding methods for Diplodocus. What they found was that the diplo skull withstood both precision nipping/biting and branch stripping but when it came to bark stripping the skull was inadequate for the task. 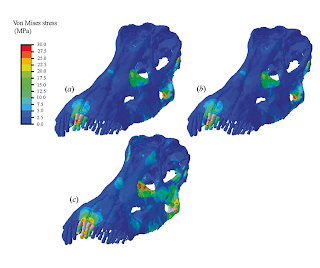 So 80 foot long, 20 tonne Diplodocus appears to be daintier in its eating habits than a relatively smaller African elephant. Trees can come back from being pruned- but excessive pollarding, girdling and root destruction will kill them. Diplodocus performed the former- while African elephants routinely perform all three of the latter. Simply put, an orchardist might stand to lose a lot more from a herd of elephants than a herd of diplodoci of the same mass set loose in his grove.

The Diplodocus morph was a successful one. The famous brontosaurus (Apatosaurus) was a member of the family with a similar tooth design. As well as the huge Seismosaurus. Even after the family went extinct various types of titanosaur hit upon the same general tooth design.

To be fair there was a multiplicity of sauropod skulls and possible feeding mechanisms, many suggesting a partitioning of resources. Camarasaurus, which was sympatric with diplodocus, had a more robust looking skull. I could buy the idea that this guy probably had a coarser diet than diplo and maybe even nibbled some bark from time to time...


But even here we see no obvious tools for breaking into the softer cambium layers of tree bark ala the elephants' tusks. Maybe I am wrong and finite element analysis of the Camarasaur skull will reveal it to be well suited to bark stripping. In either case I doubt Camarasaurus was as efficient at bark stripping as modern elephants.

But what about simply knocking over trees- sauropods doubtless did that right? Well as any lumber jack will attest- knocking over trees is a dangerous job. Even for a large sauropod a misplaced step or having that big neck in the wrong spot when a tree falls could spell disaster. Note again here, elephants with their lower center of gravity, tusks, manipulative trunk, and larger brains are better at knocking down trees than sauropods pound for pound. And let's not forget that neck- sauropods evolved the longest necks around for a good reason right? Why bother doing a risky manoeuvre when you can simply reach up and eat the food anyway? Again I'm not saying sauropods never knocked down trees- the largest easily could have with a single step- I just think the extent that they did so is overstated.


Another recent paper titled Predation and protection in the macroevolutionary history of conifer cones suggests that the increase in protective seed cones for conifers seen in the fossil record since the Jurassic is simultaneous with increased predation from large browsers (i.e. sauropods) and insect groups. The authors point out this trend is likely due to increased herbivore predation because pollen producing cones and the seeds themselves have remained constant in size during this interval. So basically, in a nutshell (hahaha), dinosaurs invented pine cones!!!

What we can argue from this paper- and the argument I will make- is that the paper suggests a certain level of selectivity on the part of the dino browser and also that seasonally available pine nuts/cones may have been an important resource for some dinos.

Selectivity in diet for megaherbivores is kind of a subjective thing- there mouths are so large and the need for the large bulk of food is so great that it is hard to imagine them being picky. Never the less one can not assume that when high quality foods are highly abundant that large herbivores will not concentrate majorly, or exclusively on them- and then switch to lower quality browse when the good stuff is less abundant. Modern elephants will do this and sauropods, when given a large crop of podocarp fruits, gingko fruits, or pine nuts, doubtless did the same.

Interestingly, another fairly recent paper on the digestibility of various dino era plant stuffs focused on the digestibility of the foliage, but not the reproductive organelles of these plants. Well, pine nuts from various modern pines are important food for multitudes of modern critters as well as humans. Anyone who has kept gingkoes, cycads, and podocarps knows all too well that they can fruit profusely also.

So although the paper came to the conclusion that many types of dino browse were nutritious/energy rich- especially with longer retention time- it failed to look at the possible dietary benefits of the reproductive organs/fruits/nuts of these plants. I think it is not unreasonable to sugget sauropods switched focus seasonally- perhaps focusing on new, rich growth in the growing/wet season and then concentrating on the reproductive propagules later on. And perhaps these seasonally available rich food stuffs were important resources for fast growing young dinos.

Please note that if sauropods switched their feeding emphasis from new growth to fruits/nuts that the trees themselves would not be over browsed to the extent that they lose all their photosynthetic activity. In this manner, sauropods, by working as selective browsers would utilize trees in a sustainable way. Besides, it would be in the sauropods best interest to not kill trees so that they can feed again off them in the next year. Don't you remember reading The Giving Tree?

In conclusion sauropods were pruners while elephants are chainsaws:

-Elephants can and do target all parts of a plants anatomy- roots, foliage, bark, branches and often waste huge amounts of biomass in their destruction

-There is no reason to surmise sauropods habitually fell trees, a dangerous activity, when they were well adapted to high browse by design

-It is within reason to suggest this selectivity, especially if seasonal, actually helped preserve trees as feeder stock for sauropods  rather than diminish them

-Despite their larger absolute size, evidence is lacking to support the notion that sauropod dinosaurs induced damage of the same type or degree as elephants

All in all sauropods were splendidly adapted to live sustainably with their vegetative communities on relatively small "island continents" but still outgrowing mammalian herbivores dramatically.

Those questions and more will be answered in upcoming installments...the next one is on keping 'em moving- the role of predators, parasites, and thirst...