Lessons From the Leopard Seal

I have been wanting to write this post for a while now. I am using it as a bit of a foundational piece as it pertains to several of my own posts (and future posts) reconstructing feeding ecologies of extinct critters (long necked plesiosaurs, Deinocheirus). Essentially I want to deconstruct some of the regimented thought processes I come across, in my opinion, with regards to ideas of what it means to be a dietary specialist. And I am using the leopard seal, Hydruga leptonyx, for my argument. 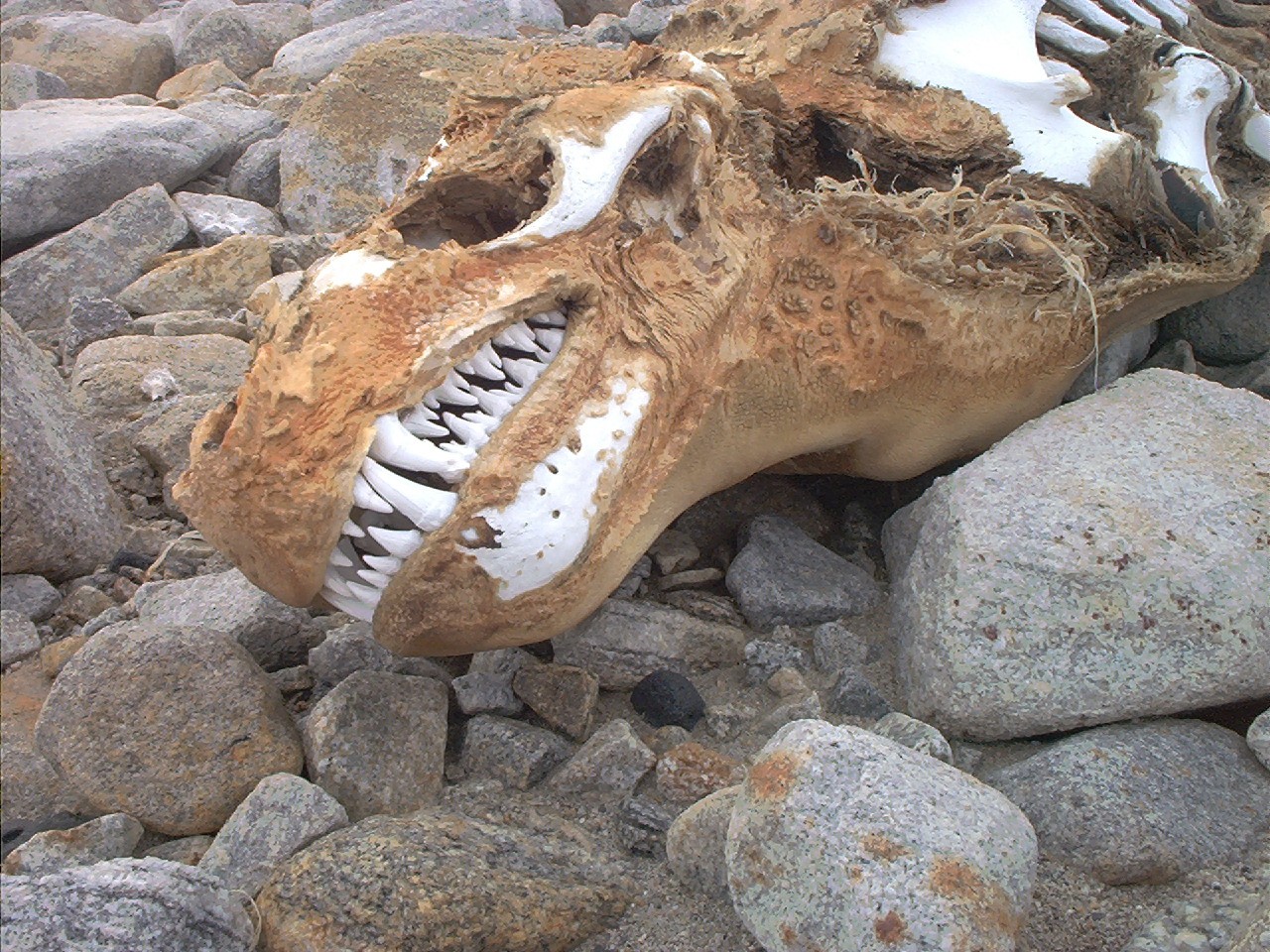 It is a bit of a macabre fact that seals in Antarctica will sometimes wander up valleys, get lost, and die with their remains being mummified in the desiccating conditions for thousands of years. Shown to good effect in the pic above of a mummified leopard seal carcass (lifted from here) the dentition of the leopard seal is very interesting. The canids and incisors speak to the well known macropredatory habits of this pinniped. Almost any documentary on the wildlife of Antarctica is replete with scenes of leopard seal depredations on poor penguins. But what I find more interesting regarding the leopard seal is what the back teeth, the carnassials, are doing. While most other carnivorans use their carnassials to slice and dice meat in a scissors like fashion the leopard seal has turned its carnassials into krill straining devices. What we have here is a switch hitter, a dual specialist, in both large and small prey.

The pic above is a still from video by David Hocking and other researchers from Monash University Melbourne, Australia. What you see is that after sucking in a small fish from a device (pictured at the right) the leopards seal then expelled excess water - the fish chum you see floating around - and swallowed the fish whole. In their test California sea lions were also able to suck in small fish but would often lose the small fish as they expelled the excess water. The leopard seal, as has been often hypothesized, was for the first time demonstrated to use its strange teeth as a sieve.

Now you may have read or heard about this study already, it's been out for a couple of years. What I want to elaborate on, in a bit of a thought experiment with a slight nod to All Yesterdays, is this: Imagine if leopard seals were extinct... would a paleontologist correctly infer the "dual specialist" lifestyle strategy of the leopard seal? Would a great debate ensue? I can imagine one camp championing the notion of leopard seals as specialist strainers of small prey versus another camp arguing for macropredatory habits. For sure the word "specialist" would be bandied about by both sides.

We don't have to look back to far into paleo-discourse to see such arguments such as the famed T-rex scavenger/hunter debate. Currently we have the debate of diplodocine sauropods acting as specialist "hoover vacuum cleaners" of ground cover ferns. Or were they high browsing branch strippers? Or both depending on what was most abundant/nutritious at the time? (For the record I prefer the mixed bag)

Now again, this is a conceptual piece and it relates to how we think about a problem: the concepts, examples, and precedents we keep in our heads and use to marshall in arguments. And I think the story of the krill slurping, penguin skinning leopard seal is a good example to keep in mind when thinking about how animals may have functioned in the past. Especially the Mesozoic. Why do I highlight the Mesozoic as a time when being a dual specialist was perhaps especially useful?

Because Mesozoic ecosystems may have often been boom/bust based on a dominant monsoonal climate regime. Torrential rains for several months followed by a significant greening up of the landscape commensurate with an explosion of small animals - insects, snails, lepidosaurs, protomammals, hatchling dinosaurs. Seasonal bodies of waters appear teaming with turtles, amphibians, fish and especially lungfish. A season of plenty followed by a season of wilt. Drying up of seasonal waterways. Small animals dying or going into estivation. Plants dying back, sequestering resources back into their root systems until the rains return. In such a regime it is quite easy to imagine how a certain flexibility in  diet, akin to the leopard seal which can hunt large prey when available but will readily live off of miniscule krill if need be, could have been par for the course.

Over at Theropoda Andrea Cau paints a vivid picture of Deinonychus antirrhopus switching dietary strategies to subsist in such an environment (text may sound a little awkward due to translation):

"During the short rainy season, the Deinonychus are used to avoid their conspecifics, except to mate. During times of plenty, this animal is a hunter shy small vertebrates, such as lepidosauri and mammaliformi, a stealthy predator on the capacities alone, ignoring their own kind. During the dry season, Deinonychus takes on a more aggressive behavior and violent, when forced by a shortage of food (its usual prey tend to aestivate during the dry season) to focus on the carcasses of dinosaurs regularly decimated by drought, and then, inevitably, is forced to interact with many of his peers."

Such a lifestyle is not without context even today. Arctic foxes following polar bears onto the ice to scavenge seal carcasses during the winter when rodent prey is unavailable. Wolves subsisting on small prey hunted in a solitary fashion during the spring and summer but switching to pack hunting of large prey during the winter.

Now some may think I am conflating dual specialization with opportunism and, admittedly I am muddying the waters a bit here. Ultimately what I am trying to convey is that taking part in several sources of food may or may not be reflected in the anatomy of the animal in question. Simply because an animal has specialized anatomical features that suggest one mode of feeding does not mean that the animal is limited to that type of food.

Unless you are an anteater. Then for sure you eat nothing but bugs.

I cannot tell whether the last sentence is intended to be facetious, but anteaters are also known to feed on fruit and eggs (and are often fed these things in captivity), which further emphasizes the point.

No it wasn't meant to be facetious I simply didn't know that. Makes sense I would assume the fruit have to be fairly ripened.