As a child of the 80's and growing up with a hefty collection of VHS tapes I am no stranger to repeat viewings of movies. In fact I love watching movies that resonate with me several times - sometimes I see stuff I missed, and often times I even grow fonder of films with additional viewings. They start to take on a comfortable, well worn feel - like a favorite pair of jeans or shoes. So it is no small surprise that I got back for a second viewing of Godzilla ( at the el cheapo matinee price at 10:40 am no less) to see how the film holds up for repeated viewings.

It holds up quite nice. I noticed the score a lot more and how effective that was, in combination with the     dark, moody atmosphere to create a sense of foreboding dread. I liked Cranston even more and he far and away gave the best performance in the film. The girl from Full House and Cranston's son I still can do with out. What is it with Hollywood insisting on these inane love side stories? I mean I realize that big budget films got to make bottom dollar but do you really think that the type of person that is gonna show up for a Godzilla film will be disappointed if there was not a pointless love subplot? I think not.

The MUTOs actually grew on me a lot. When they meet in San Francisco and have a bit of a courtship - that scene was really well done and laid out nice. Forget the fact that you do not see them mate?...

In my last post on Godzilla I mentioned I saw a slight nod to Mothra and Jurassic Park. In watching the film for the second time now I saw even more caterpillar/metamorphose symbology such as in the classroom in Japan. I now think the film was not nodding to Mothra but instead to the very real metamorphosis that the MUTOs were going through.

Now I want to list some of the very cool and well placed nods to Jurassic Park I saw in the film. They all have to do with the T-rex breaking out of the paddock scene.

1) You all know the scene of the rex putting its dangly little arms on the electric fence and realizing that the fence was dead? Well there is a scene when the MUTO that was being quarantined at the nuclear reactor site busts out. It prominently raises >two< appendages to dismantle the wire cage around it. That scene, coupled with the very similar sound effects, harken back to the T-rex breaking out of the paddock scene nicely. 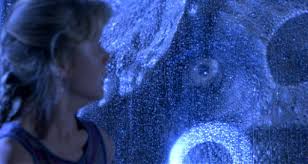 2) After the rex breaks free there is that superbly tense segment where it stalks the cars and they try to remain still as to not elicit the predatory response. There is a wonderful homage to this scene when the MUTO attacks the train carrying the nuclear warhead on the bridge. You will notice it when the soldiers are surprised by the appearance of the MUTO and they freeze on the bridge. The scene even follows many of the same camera angles and cuts of Jurassic Park.

3) And finally there is the scene where Goldblum cleans off the condensation on the window to get a better view of the carnage befalling the kids as their car is being torn apart by the rex. In Godzilla this scene is given a nod when during the part on the Golden Gate Bridge the bus driver cleans his own window to get a better view of Godzilla as it approaches the Bay. Hell, there may be more. These are the ones I found so look for them. I am not the first to write about the connection between Godzilla and Jurassic Park. In fact it seems to be part of a larger tribute to Spielberg as there are several of his stylization's through out the film.