What is Old is New Again (but still really, really old)

Well end of the year ramblings are a time honored tradition around here ( for the second year in row) so here is your little antediluvian spin on the past year.

On the blogging tip it is fun and I enjoy comments so keep those coming those of you that do chime in. Plan to write about more aquatic stuff- ammonites, deep scattering layer, squid, and sharks. I also want to get into the increasing spread of wild/domestic dog hybrids cropping up around the world and what they may mean for ecosystems. I want to talk about dry tropical rainforests, soil crusts in the Mesozoic, fear driven Mesozoic ecosystems, and dinosaur compaction of tree roots

For me there was no clear cut winner as far as any group of animals, dinosaurus or otherwise, goes for the year 2013 in paleo. There just seems to be a lot more of everything as far as I can tell. A lot more discoveries, studies, publications, books, and blogs. And the speed at which this information is disseminated throughout the interwebz is truly astonishing. Something that you can do now, which was not available 20 years ago, is social media. Where someone who is just a fan of paleontology like myself (my goal is to become the Dan Carlin of paleo after all) can hook up with some of the bigger players in this field and get real time thoughts and insights 24/7. And the online paleo community has actually always been like this even since the days of AOL and dial up. Several people in the field are literally hooking info up like a veritable CNN of paleontology. And this is an interesting phenomena which raises some questions in my mind at least. For a society in which information is shared with the click of a button, it is important to think about what is being sent and who is sending it. When that info is shared by people who are looked upon favorably in the field their implicit support also tends to come along with it. And with their sharing both information and their support of it- that piece is further spread through all stratospheres of the field, ultimately a classic "viral" spread. And for me at least it is very easy to imagine that some pieces of information- for whatever reasons - get shared a lot more than other pieces of information. And so as these pieces of information get spread they enter the general sphere of knowledge and thus inform where future studies, questions may arise from. The stories that don't get this viral spread don't get quite the reach of those that do. And therefore whatever merit they may potentially present stands a greater chance of getting lost in the shuffle. Not placing a value on the veracity of information in either case- just saying some stuff spreads... some doesn't... and possible repercussions. Take that for what it is, it could be good in some cases bad in other cases.

Secondly Deinocheirus is now known from good skeletal remains. Although not explicitly a makeover the new remains are a dramatic departure from how this enigmatic ornithomimid was once depicted. Being able to attend the unveiling at the SVP convention was pretty darn choice brah as the strange mashup of the humped camel-therizinosaur mimic sent shock waves through the audience!! 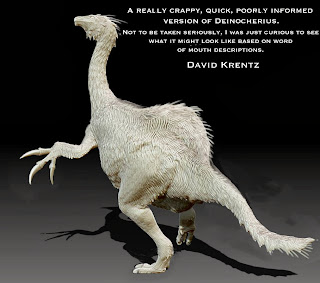 And finally there was the article at Tet Zoo by Darren Naish that synthesized much of the current thought and knowledge about woolly rhinos. I had no idea so much had changed with regards to these ice age beasts. It was eye opening to see how different these iconic brutes are from their classic portrayal. The article raised some interesting questions for me as I never had really thought about why woolly rhinos never made it into North America, while so many other ice age megafauna crossed over. Was North America already too saturated with pugnacious giant ground sloths, mastodons, and mammoths for it to get a foothold ecologically? It is speculative but sloths and north american mastodons never penetrated into Eurasia as well....

Together these three makeovers are some of the biggest stories of the year and also suggest a line of study based on reappraisal of old, well known species that appears to be gaining traction in my view.

Cheers and happy holidays from the Salad!! 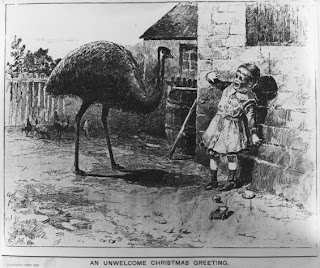