Return of the Land Shark

The paleo world is all abuzz about the latest discovery of possible Tyrannosaurus rex induced damage on an Edmontosaurus caudal vertebrae- in which part of the tooth was left behind and the bone shows sign of rehealing. A lot of the discourse has been of two types. There is a strong sentiment of Geez, can we get over this scavenger/hunter debate already and talk about other issues? And the necessary follow-up: Can we talk about other dinosaurs please (T-rex does get a huge amount of media/research attention)? But then you also have the eternal T-rex lovers shouting from the hill top: T-rex was a predator!!! The ultimate Cretaceous killing machine!!! Bow down!!!!

But what I think get's lost in all of this hoopla is that this discovery hints at a possible predatory strategy used by tyrannosaurids. The first time I came across this was Mark Wildman suggesting this strategy on facebook- which Heinrich Mallison added some pertinent anatomical layering in the comments. Subsequently I investigated further and saw that Heinrich had brought this strategy up way back in 2011 on his blog.

Any killer that is good at its craft develops a certain modus operandi, a particular style of killing that fits its needs and abilities optimally. This holds true if you are a serial killer or multi-tonne theropod. If clues are left behind and certain patterns emerge repeatedly this is cause to pay attention. And in the case of the tail-bitten hadrosaur- the latest case is not the first. There is the Brachylophosaus canadiensis JRDI 0002 which shows some profound damage and subsequent healing. The biter in question here is thought to have been Daspletosaurus sp.
which was a fairly robust, but smaller, precursor to T-rex. You will notice a neural arch is cut in half and much of the lattice work just obliterated. Secondly you have the attempted murder of an Edmontosaurus sp., currently housed at the Denver Museum of Natural History, which also shows damage to the caudal vertebrate in the same rough location as the Brachylophosaur. In this case however we can be fairly certain T-rex was to blame as it was the only theropod large enough to induce this type of damage in that system. 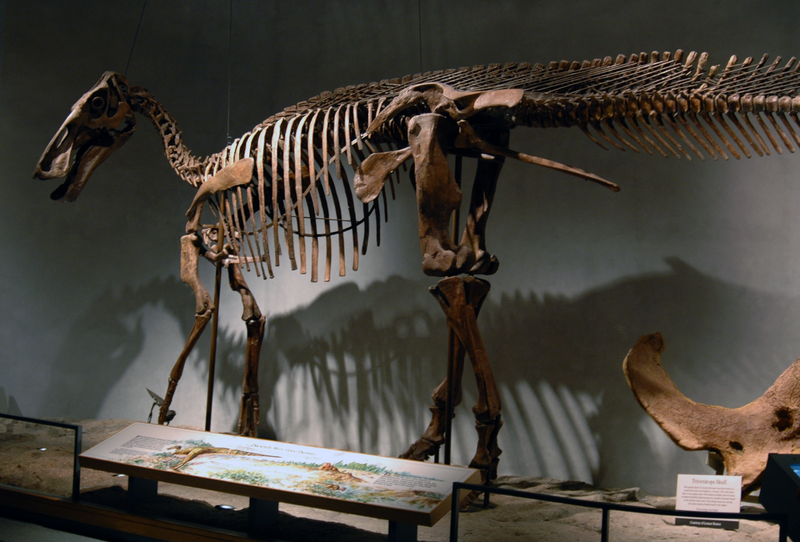 Altogether these three cases are very suggestive of a pattern of tail biting among tyrannosaurids- at least when hunting hadrosaurids. But why bite the tail? I mean you don't really ever see mammalian carnivores targeting the tails of their prey. They more often go for the neck especially felids, or attack the limbs, groin, or belly like canids/hyaenas. Why the tail? Was it simply because that is all the tyrannosaur could reach? 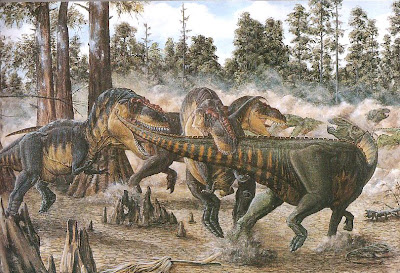 I think not. Like the great white shark it is possible that tyrannosaurids had specific strategies for specific prey. And just as great whites modify their tactic based on the type of pinniped they are targeting (Catch as Catch Can) tyrannosaurids may have targeted the caudal tail region/hip in order to sever the caudofemoralis muscle- which is the largest propulsive organ in these animals. The hadrosaur was essentially grounded at this point to be dispatched at the tyrannosaurids leisure. That tyrannosaurids would have wanted to stop hadrosaurids as soon as possible is evident; the three specimens discussed above lived after the bite and healed a bit does point out that they were cursorial enough to escape tyrannosaurids. The predatory strikes in these cases missed the mark a bit and did not incapacitate the caudofemoralis muscle. Great whites will use a similar tactic on elephant seals by biting into their rear flippers from below, thus incapacitating their primary locomotory organ.

Very interesting idea, but try telling the fact to acepredator, who thinks that tyrannosaurs are losers. He thinks that they could only attack the neck of the animal since their jaws do not open wide enough.

Was listening to a UC Berkley lecturer (as well as Sean Van Sommeran) on YT talking about how he used to work examining all dead marine mammals who 'stranded' either due to carelessness, natural causes or predation. He found that pinnipeds & small cetatians who were struck by white sharks: well there was no real pattern to the strike except that it was massive and intended to kill or disable on the initial strike whatever part of the body it landed-head, torso, abdomen, spine, caudal stock etc. The lecturer (I think it was Doug Long) said that when they were necropsied, he found that the bones were often shattered by the impact of the shark's attack. So would a Rex try to crush the spines, rip out the guts, shatter the femur or generally try to cripple it's prey? Probably.