California Dreaming: Moss in the Desert


Here in southern Califas it is winter. This basically means that on the colder days, shorts are not really an option. In the opinion of people from more northern or inland parts of the country- the California winter is not really a winter at all, and there is some truth to this. At best the winter months are  described as a hybrid of spring and fall. When you look at the vegetation it is in a state of both decay and regrowth. This simultaneous juxtaposition of seasons is best evinced when you go explore the native chaparral vegetation as opposed to the imported non-native landscape.

As seen in the above picture I took in La Jolla Canyon, a popular hike in the Santa Monica Mountains, there is a strong contrast between old, dead vegetation from the past season and bright greens from the new winter growth. The main plant in the foreground is the Dr. Seuss plant giant coreopsis, Coreopsis gigantea, which explodes with succulent green growth from a stump of dried vegetation. California sycamore trees in the riparian creek below will probably start putting on new growth very soon as well, perhaps by February or even earlier. And if you maintain a relatively natural garden here with minimal irrigation you will notice a similar regrowth this time of year.

And it has not escaped my attention that this pattern, relatively balmy winters coupled with seasonal rains, may have characterized many times and places throughout the Mesozoic. Perhaps areas as far north as Montana or even Alberta experienced a bit of greening up, even as other plants- Gingkoes, broadleafs, dawn redwoods- were shedding leaves and wintering up. Imagine, instead of stands of giant coreopsis coming back to life, weird summer deciduous tree ferns and cycads springing back to life. Anyways the idea that relatively seasonless southern California might offer some insight into Mesozoic seasonal regimes is not without merit imo.


Another observation I made during my winter walk through the semi-desert chaparral was the ubiquity and abundance of moss. Now as I have discussed earlier with ferns in xeric habitats, moss is not what immediately comes to mind when imagining desert vegetation. But I did find lots of the stuff, oftentimes  in shaded, wet areas- but not always, some of the larger patches were in full sun. 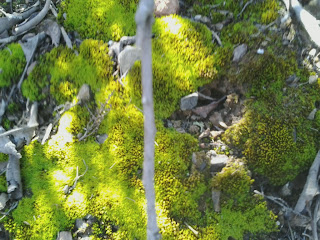 As you can see in the above pics the moss was forming a veritable living carpet. In some areas adjacent to the trail, areas with lots of foot traffic and weed dispersal from hikers, the moss was losing ground to grasses and weeds. But in areas where the moss was well established, the angiosperm competitors were relatively excluded as shown in the pics. Inspired by these observations of bryophytes in desert environments I did a little Internet sleuthing. Turns out desert moss is part of a larger suite of organisms referred to as biological soil crusts and an emerging portrait of their pivotal importance in arid ecosystems is ongoing. The speed with which these mosses can revive from a dessicated state to green is astonishing.

Check out this video from Geodermatophilia.

While we still have much to learn about soil crusts, recent research indicates that these mosses go into carbon deficit when exposed to frequent small rainfall events as opposed to infrequent large rainfall events. So they actually thrive in deserts with long dry spells and then heavy rains.

Lack of competition from angiosperms. Grasses were not widespread even by the end of the Cretaceous. The pattern of angiosperm spread was from wetlands to more arid habitats.

Dinosaur feet. The feet of dinos had a lot more in common with large flightless birds, kangaroos, and camels than sharp hoofed ruminants. Ratites, camels and kangaroos coexist with soil crusts but sharp hoofed herbivores cut into the slow growing crusts and erode the thin desert soils. The largest dinosaurs would have been rare in desert environments.

Monsoonal climatic regime characterized much of the Mesozoic. This pattern of seasonal, heavy precipitation events would have favored mosses as opposed to sporadic, light rainfall events as discussed above.

Until then here is a little thought experiment. Imagine that caribou and their habitat, the arctic tundra, were extinct. Researchers discovering the skeleton of the dominant herbivore of the arctic, but lacking a proper proxy for its tundra habitat, may have assumed it dined in a manner not too dissimilar to other cervids- a mix of browsing and grazing on various shrubs, trees and grasses. The researchers likely would have failed to realize that the most important forage for caribou is not a plant at all- but slow growing lichen, which accounts for up to 90% of its winter forage. Through no fault of their own, these
researchers would have based their conclusion on known herbivores and ecosystems, but their conclusion would have been wrong.

Now imagine strange dinosaurian herbivores dug from Africa. Their ecosystem is construed as an equatorial arid region, dominated by gymnosperms, for which we have no modern equivalent. Angiosperms were rare and grasses not yet on the scene. Yet the skulls of these dinosaurs are most aptly compared to "Mesozoic lawnmowers" and abundant grit marks on the teeth suggests a mode of feeding near ground level. The consensus view is that without grasses, these dinos likely grazed ferns and horsetail- both types of vegetation commonly construed as groundcovers during the Mesozoic.  But maybe, like caribou, this dinosaur- let's call it Nigersaurus, was not your typical herbivore at all but subsisted predominantly on mosses

/biological soil crusts in an ecosystem with no modern proxy. The weak jaws, downturned neck, grit abraded teeth, and specialized dentition and jaw are in line with scraping food from the soil and are over designed for cropping ferns, horsetails in my opinion.

Was Nigersaurus, and other dinosaurs, perhaps specialists in cropping moss, lichens, soil crusts? I don't know for sure and I am just putting this theory out there. What I do know is that it is an area worth exploring and we should not be limited in imagining how these animals/ecosystems functioned based on what we see today.

and here is some more (Kate) Moss in the desert...