Chicken Fat in the Fall 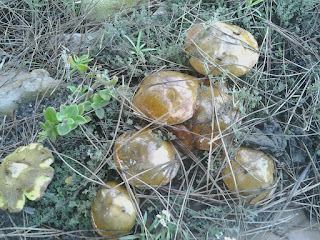 What does the Fall mean to you? Cozy evenings by the fireplace? Chamomile tea and that extra hour of sleep from daylight savings? A pervading sense of the rhythms of life winding down? Turkey, flu shots, and football americana?

Well for me Fall in my neck of the woods is the time for mushroom foraging. I am constantly bewildered by the strange appearance and bewildering diversity of mushrooms that crop up even in the relatively semidesert conditions of southern California. This year we got a new type that I have not seen before cropping up amidst the shaded flagstone in our backyard.

Now I am barely a novice at mushroom identification but a quick perusal of the interwebz and I am fairly confident that this is the chicken fat mushroom aka American slipperyjack, scientific name of Suillus americanus on the East coast which is most likely synonymous with what is seen in Asia and western North America Suillus sibericus. 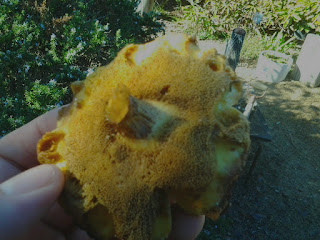 The most obvious feature of this 'shroom is slimy appearance of the cap, which is actually an interwoven layer of gelatinous hyphae and the beautiful yellow colors morphing into browns on the stem and cap. Some claim touching this results in an irritation similar to poison oak although I seem immune. It lacks gills and has distinctive pores. As you can see in the pic above some type of critter has been nibbling on these structures, likely slugs or snails although I have yet to catch this critter in the act. As far as human consumption is concerned I read that although it is edible, reviews are mixed. It supposedly sometimes has a mild lemony flavor but that slimy texture does not go away with cooking and is recommended as a spread. Several reports suggest that consumption leads to frequent bouts of bathroom usage. Needless to say I have not tried to eat this 'shroom because I am not experienced enough, nor do I really like slimy foods and I am a little scared of the purported intestinal distress it invokes. 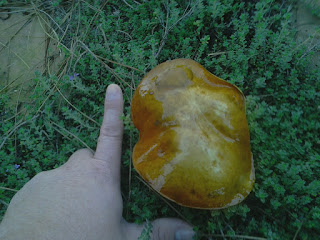 Interestingly I have read that this species forms specific mycorrhizal associations with various species of pines (Pinus). As you can see from the pic above the chicken fat is growing among thyme and although  we have Italian Stone Pine (Pinus pinea) trees growing nearby, the mushrooms are not really in the root zone of these pines, living on a raised flagstone patio which was built several years ago.

*Amendment November 21. Since I published this post additional chicken fats have came up closer to the base of the Italian Stone Pines suggesting that they are indeed in a mycorrhizal association with the pines. Most likely is that the roots of the pine have grown up into and around the flagstone patio- since it receives water throughout the year for the groundcover growing between the flagstones.