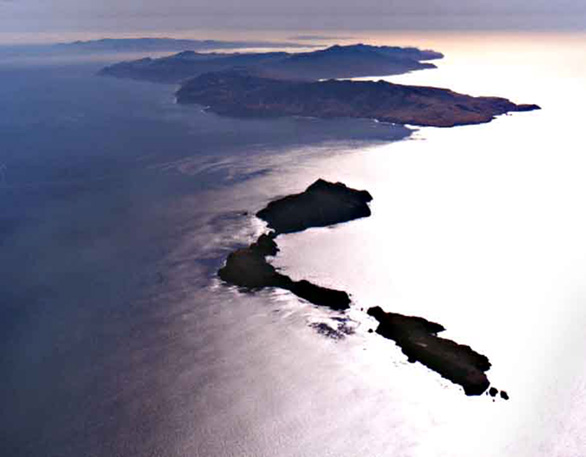 However this is not to say that our stewardship of these islands has not been without pitfalls...

Prior to the establishment of the Channel Islands as a national park in the 1980's decades of ranching had established feral populations of several hoofed mammals on many of the islands. The largest and most ecologically diverse of the islands, Santa Cruz- the island we will be concentrating on-, supported several thousand feral pigs. Heavy grazing, trampling of vegetation and especially rooting by the pigs disrupted native vegetation patterns which had evolved without native hoofed mammals. Invasive non-native grasses and herbs such as fennel were able to out compete the natives in these disturbed habitats.


However the big victim in this ecological unfolding act was the endemic island fox. In an interesting and very illuminating series of calamities feral pigs, golden eagles, and bald eagles shaped the fate of these smallest of North American canids.

Feral pigs are prolific breeders and they eventually outgrow the size where they are potential prey to the eagle so they can absorb the predation from the bird. Island foxes however have at most one litter every year, are prey size their whole life, and also diurnal like the eagle. And due to the relentless scouring of the earth by the pigs the vegetation cover is diminished leaving foxes more exposed to the eagles. So what we have here is golden eagles eating both piglets and foxes, but with foxes taking it on the chin from the aerial predator with a much more disproportionate hit. And stemming from this predation pressure a precipitous decline of the fox started in the 1990's.

Interestingly it can be seen from this cascade of events that the bald eagle, which eats mainly fish and carrion-not foxes, played a vital role in safeguarding the foxes by chasing off any golden eagles that tried to colonize the island. It was the extermination of the bald eagle from DDT on the islands as much as the feral pig problem that heralded doom for the foxes.

In order to save the imperiled island fox the Nature Conservancy (who own 75% of Santa Cruz Island) and Parks Department began an ambitious, but controversial, restoration of Santa Cruz Island. A two year campaign of pig eradication ended in 2007 with over 5000 pigs eradicated. The golden eagles were relocated to the northeastern sierras- no easy feet as they are protected themselves. Bald eagles were reintroduced to Santa Cruz island in order to create a front line against future golden eagle invasions. Island foxes were bred and released into the wild. Oak seedlings sprouted, native vegetation started reclaiming lost ground. Although the multimillion dollar venture has earned some scorn from animal rights groups and spawned a book "The Kiling Fields" it is now considered one of most successful and well implemented restoration projects ever undertaken. Time has proven the Nature Conservancy and Parks Department right. There is literally SOOOO MUCH that can be taken from my all too brief synopsis of the events that transpired on Santa Cruz Island that one can literally come up with a whole semester ecology/environmental policy upper division college class on it. But my reasons for writing this post have nothing to do with any of these reasons you might be thinking of. You see competitive exclusion, invasive species and trophic cascades are all fine and dandy but what I am really aiming at here is the connection of the events that occurred on Santa Cruz Island to the islands' prehistoric ecology....

You see feral pigs were not the first large mammalian herbivore to inhabit the islands...

More to come- tune in later for This Island Earth Part II- Don't Tread on Me!!!