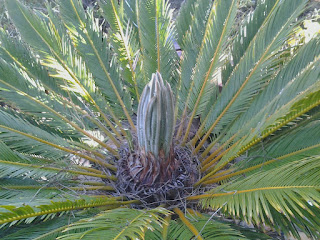 Pictured here is an example of Cycas revoluta from my back yard. This is the common Sago Palm, native to Japan, and is a common landscape plant used here in southern California. Don't let the common name fool you, it is not a palm- it is a cycad. 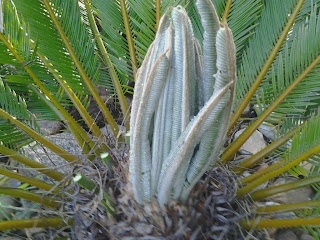 And at this point is when I believe Mesozoic cycads would be most vulnerable to dinosaur browsing. The adult branches are far too tough, spiky, and lacking in nutrients to be of much attraction to dinosaurian browsers. But these softer younger more palatable looking fiddleheads may have been an important seasonal resource (if past cycads were as slow growing as these guys they only put on about one set of fronds per year), especially for critters like stegosaurus which evidently had a pretty weak bite and certainly couldn't handle the mature fronds of a cycad. But as anyone who has ever gardened around cycads can attest, those stiff, spiky outer branches form a protective "ring" around the new growth and reproductive structures. Any critter wishing to get in for a feed needs either a long neck (sauropods) or a neck like this: It is a little known fact that stegosaurus had a well armored neck. Now, most thought has centered on the armor serving a defensive purpose against marauding theropods. Defense is certainly a plausible use, but like many anatomical features, I believe the neck armor served multiple functions and would have allowed stegosaurus to safely probe deep into spiky cycad crowns after tasty fiddleheads, cycad fruits etc, etc.